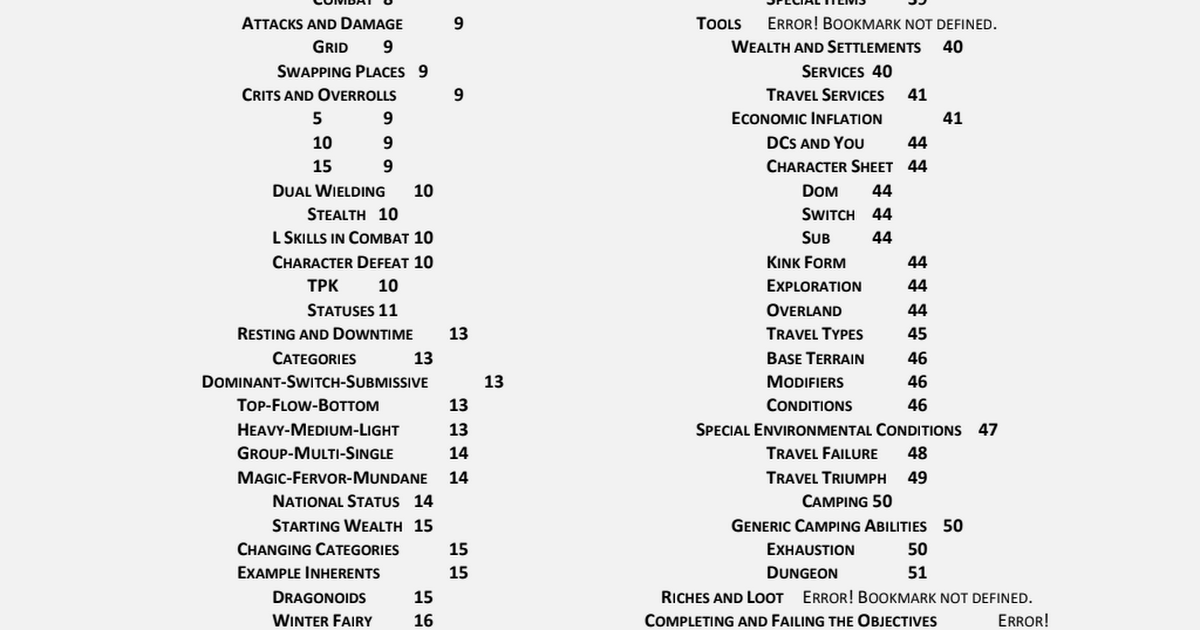 Check out the BB Games community on Discord - hang out with 16 other members and enjoy free voice and text chat.

You said it is a rough draft, and you asked for feedback, so I’ll say what I noticed while reading through the document.

I know some of these points may be too specific for a “rough draft”, but I didn’t want to leave them unmentioned and forget about them.

With that said, I like where this is heading, and would love to see this system grow in the future. It already allows for some fun stuff, and I’m looking forward to seeing what is to come. I’ll definitely take some time today and roll up a little sample encounter to try things out.

Wow, thanks for the intensive feedback.

Critical and Bursting Limit: 1+Inflatability+Body (Minimum of 1)
I will add further clarification in the document with the next update.

I don’t think it’s fully playable in it’s current state; it’s enough for combat but not much else and hardly balanced besides. I’ll keep working on it but I won’t be able to devote all my game design time to it as it is a side project.

Sweet! I just finished a little test game, and while I think I didn’t do everything properly yet, it still was quite enjoyable. If you split your party into different roles, you can have a quite effective lineup. But I also think that PvP can be quite interesting too.

For the Elastic thing: Yeah, that’s what I figured. I just worded it weirdly in my first comment.

Cool! Did any notable balance issues or ideas come up and do the current rough character sheets work?

A few little things. There was no mana limit entry, organization is a little weird, but mostly it worked out.

Also, now I realize there are two things called ‘Dodge’: There is the derived stat ‘Dodge’ and the Inflatability skill ‘Dodge’. I used opposing rolls with the dodge skill for combat in my playthrough. Maybe it should have been the stat instead, so even helpless characters have a chance to get away. The solution would probably be to rename the skill to ‘Evasion’ or similar.

Finally, I am not familiar with the term “damage resistance” yet, so I assumed DR simply means a flat reduction of incoming damage.

Mana Pool has been added and will be in the new version. The derived stat has been renamed to Evasion and clarified, and DR has been clarified.

Can you send the example character sheets?

Character sheet is updated. It is now highly automated and hopefully looks better.

Game is now updated with most suggestions from Tobias1595. Inherents have been merged with the Racial system. A table of contents, 2 new weapons, and more abilities have been added. I think with the next update it should be ready for a real game once I smooth out the skills. The only suggestion not implamented is the XP one, as I still am deciding on that.

Discord link is up, feel free to join if you are interested.

Update is up. General content update with a focus on adding enemies. Fervor also does stuff now. Skills have been clarified but I’m not exactly sure if they need much else.

I’m looking for people willing to do a one shot playtest.

Update is up. More complex inherents, beginnings of Potions, new inflation mechanics, and some other stuff.

Update is up. Worldbuilding, more Dominant abilities, Overroll mechanic, and the beginning of exploration and nation mechanics. Also probably other things that I somehow forgot.

A oneshot playtest is planned for 7am EST this coming Sunday. Anyone interested? I can do 5pm too, if more people are interested.

First playtest went decently but we spent too much time on the pre game RPing rather than actually testing the game. Even so, Evasion and DR have been adjusted from our findings.

Update is up. Example characters, starting of Wealth mechanics. Parry now actually does something. More abilities, more pleasures. Some work on Exploration. Lore development. Other stuff I forgot.

Last weekend we did not manage to get a playtest together.

The next update is taking so long because my main project is demanding all my attention.

Update is up. The exploration system has been brought to a functional level though it is no where near as developed as I would like. I’ve been feeling like crap the past weeks and it has been inhibiting my design abilities. I would like to get back to playtesting once I’m feeling better to figure what exactly needs to be done next.

Update is up. Lots and lots of changes. Character creation has been slightly reworked due to some stat and item adjustments. Lots of stuff has been completed or added to; Shields, Enhancements, Special Items, Abilities, Enemies, ect. Other things have been expanded on. The Kink Form has also been added to help find a group with similar tastes to yours. This will tie into the post completion content packs which will have additional content.

The deisgn for a fat themed TTRPG has begun. VERY preliminary stuff so far though.