I’ve been working on BE Witches for a few years now, and I thought I’d share the newly released demo here!

The game can be played mostly with a mouse. It’s a Dungeon Crawler/Point & Click with Puzzle/Shoot’em up oriented combat, and is pretty unique if I say so myself.
It has an Amplification system that allows your characters to rank up, becoming stronger and causing BE in the process. Each character can go up to rank 5!

Going through the demo should take approximatively 4 hours, more if you set out to do everything.

I have played the game, very good job!

What’s the difference between the normal versions and the cheat version? :o

I played your game a few months ago ! It’s absolutely awesome. Love the art, love the concept, love the execution, love the BE. You’re doing a quality BE game, and I really like how original for fetish-based game it is. Godspeed, you magnificent bastard !

Okay, uh. A minor complaint. Both tutorials feel like huge word dumps. For the combat one, you should lock control away from a player and have them do it step by step, so they understand what’s going on.

Pretty good, overall. I feel like I’d be able to say more if I had gotten further, but the zombie is just stomping me, and I don’t think I have the brain cap to “git gud” right now.

The mechanics are rather simple to understand in paper, not something that’s really rocket science, and they work pretty well. Thing is, they work well separately, I feel. In execution, and feel free to blame my beef brain or any other thing, having to keep track of three separate mana bars plus the shapes flying across the screen plus clicking on the defeated shapes plus your health plus the things you’re matching plus whether the enemy is casting an attack or not plus casting the right spell at the right time to reduce or increase damage plus…
It becomes a clusterfuck in seconds.I strongly feel like some aspects of the combat should be toned down. Moreso assuming, and I might be very wrong here, that this is one of the starting sections of the game.
I don’t mind hard games, I really don’t, but when you have a game this heavy on mechanics, throwing the player into the deep end right off the bat after, at most, a 9 page explanation of them is risky. Other games that are also mechanic-heavy tend to take a more piecemeal approach. Introduce the player to a mechanic, make them get used to the mechanic, use the boss to test them in their knowledge of that mechanic. On the next area, you introduce a new mechanic on top of the previous one and start from the top. I feel like this game would benefit from that sort of structure, but it might be too far into development to make those sorts of changes, in which case, moot point. Nevertheless, I still believe combat should be lightened somewhat.

Oh the opposite end of the spectrum, the point & click gameplay is fucking on point. The area design and the overall colorfulness of the screens only contributes to it, and seeing how all the little bits and bobs react is frankly entertaining. Really clever use of art assets on the column puzzles too, those are just fun. The one complaint I have is the introduction of the magic shards and orbs and how this color plus this color equals this other color at the start of the game, not the best place to have it. I’d recommend delaying that tutorial until the first shard puzzle comes up, in the sea level. Beyond that, more things to click on, please, because I swear that’s what I’ve gotten the most entertainment out of.

Tehcnicalities aside, the characters look delightful. They look like they belong in the setting, on top of them having an overall really solid design. I really do like that the main character isn’t a straight-up human. Color palette is primo stuff, really sells the feeling of a seaside town, and the dialogue reinforces that. Speaking of, dialogue, well written, gives a clear idea of what each character is about. In a few lines, you get the basic gist of their personality and attitude. That sort of writing style, for games with more of a comedic tone, works pretty well.

TL;DR:
I can’t speak for the kink stuff, I ain’t gotten to it. Game’s, overall, solid. The gameplay loop is decent, but it requires too much of the player way too early into their playtime. Having to manage so many things at once runs the risk of distracting from the kink content. Whether that’s intended or not, can’t really say, but I wouldn’t say it matters. Characters are great, the point & click gameplay is fantastic, the visuals are on point, and the dialogue is fun.

Best of luck with whatever’s left to be done.

Man, this game is really something!
Gotta say, this just radiates personality and effort, it’s really impressive.
My overall feedback would be similar to the others: It’s rather risky to make the “tutorial” to your game a simple textdump, as some people might get confused or not really grasp 100% of it. Personally, I had very little trouble getting into the gameplay loop and after a few battles it became pretty natural. Still, I thought that some of the enemies are somwhat weirldy balanced if you look at where in the game they appear, like the Nightmare girl being somewhat more difficult to fight than the “final boss”??Then again, maybe that’s just me being dumb.
One thing I didn’t really fully understand is the little book with all the monster in it. Don’t get me wrong, the compendium itself is rather straight-forward, but I can’t really figure out why I get a crown for them sometimes and other times I don’t even though I do the same things.
Also, I played the game for like 2-4 hours and it crashed due to lack of memory. I dunno if that’s a problem wiht my PC, but it never happened for any other game, so…
Anyway, I really like this! The running around, being able to take notes, the puzzles, it was all really damn good!

Now for a question to anyone willing to help me out with something: How the hell do you solve this?? 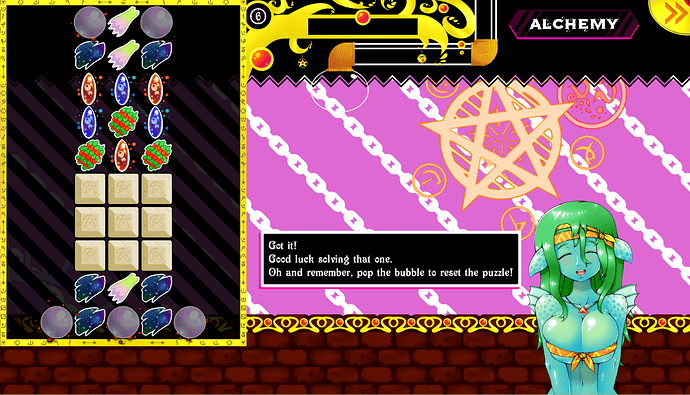 For a hint without using the walkthrough, just remeber, you can move to an empty space.

Glad to see you made it Nosebecc

Wow, this game was addicting. And hard. Really hard. Ow, my face. Got through most of it though. I was wondering- is there any way the art assets could be exported? I like to keep galleries outside of my games so that I don’t have to open them up and browse through them to see the good stuff. Hope it keeps being as good as it looks in this demo. =)

Oh wow thanks for trying the game! I’ll try to answer everything.

The cheat version lets you amplify to rank 5 from the beginning, and you can synthesize without spending items.

Thanks for the review Disaster! The game is without a doubt very overwhelming in its current state, but time constraints forced me to go for a basic written tutorial. I’ll make sure to introduce everything slowly (no shapes attacking the cursor at the beginning) and to implement better tutorials and UI in the next version. The monsters will be weaker at first, as well.
I’m glad you liked the point & click side! It’s going to become much more interesting than it currently is too.

I’m surprised you thought Nightmare was the stronger one Erronwolf o:
The crown in the almanach shows up once you’ve defeated 10 of the same monster. You unlock more info (except drops) on a monster as you defeat more of them, and you will have unlocked everything once 10 have been defeated.
Also thanks for reporting that crash! That’s a new one for me, but I’ll look into it.
As for that puzzle, the key is to remember that you can also select empty spaces, as Falcon said. ^^

Thanks Firesoul! I do have some of the assets on Pixiv/Deviantart/Twitter/Patreon, but for the most part I’m keeping them as Patreon rewards, sorry… There are without a doubt tools to export graphical assets of Gamemaker games out there though.

I do have some of the assets on Pixiv/Deviantart/Twitter/Patreon, but for the most part I’m keeping them as Patreon rewards, sorry… There are without a doubt tools to export graphical assets of Gamemaker games out there though

Unfortunate, but it was the answer I was expecting. Thankfully said tools do definitely exist, and because of how clean the art is, assembling the pieces wasn’t too troublesome. And digging uncovered that I wasn’t done yet, on top of that. I’d thought I’d maxxed the enemies out. Guess I have more playing to do. =P

Hah, the max rank for enemies in this demo is 4, but they can actually go up to 5, like every girl. Well 6 actually, but that’s for the final version of the game.

Hah, the max rank for enemies in this demo is 4, but they can actually go up to 5, like every girl.

Well, that explains why they wouldn’t rank up in-game lol

Just played it, just wondering where the save mechanic is? I have just started.

@no1 Head north towards the beach, and follow the ? signs. You’ll get pointed there pretty quick.

@Nosebecc I’m getting softlocked right out the gate when I try to fight the first Goblin in the ocean. It seems like a mandatory encounter, but I just get endless chains across the screen until I force quit. Otherwise, I’m amped to get into it.

From what I’ve gotten to see, I’m echoing most of the other feedback: the mechanic dump is a heavy handed (I’d cut a few entirely, but that’s just me), the art is gorgeous, and the game is oozing polish. Love what you’re doing - I just wanna be able to actually play it!

Yep, it’s as tharsus said for the save!

Weird, it’s something I recently fixed in my version, but I took my time since it only happenned very rarely to me.
Does the endless chains bug happen every time for you? I’ll update the demo real quick if so.

Yeah, I’ve tried half a dozen times. I even grabbed the walkthrough off your site to see if there was something I could do differently.

The soft lock still gives me mouse control, but I have to force-quit (alt-f4) twice to bring up the Windows prompt to close an unresponsive program. It’s really not happy. If you do push up something out, I’ll be sure to jump in and see if it persists. Are there logs, or something similar, that would help?

Sadly no, there are no logs. There is a crash report when the game crashes, but even that isn’t always helpful…

Still, I’ve uploaded a new version on itch.io. I can’t promise you it will work since I’ve never had that bug trigger so consistently, but it should be better now.