It’s been long overdue since I recreated my dev thread.

I hear you ask:

The answers are “on my hard drive” , followed by “life and the novel I’m writing have to come first unfortunately”

Things have been getting done at a trickle as free time allows. I won’t talk about that anymore.

This next update I’ve been working on is an ambitious one designed to make the world of the game feel a bit more alive and less like you’re just one person in the game world. What have i been working on?

That was a lot of stuff huh? But wait, there’s more!

But what else do you have planned?

*additionally you should be able to recruit towns people. This may be put off for a later update focused on the agency though (not started)

Whew, that’s a list isn’t it? I’m sorry it’s been taking so long but it think it will be worth the time. Its the biggest update I’ve bitten off so far but i think it will make the game shine some more. The system work is pretty much done, and all that remains is a ton of content to write. The next update after this i have planed is a remake of Myre’s fattening line.

[Link to current released version. (contains none of the above content)]Belly Mod release(current as of 7/1/2017)(combat and office patch))

If you like my mod and want to support me, consider joining my patreon: Patreon

Or feel free to stop by my personal content discord! Link

I took some screenshots to tease what I’ve gotten done so far.

Here is an example of the new client list for the brothel. 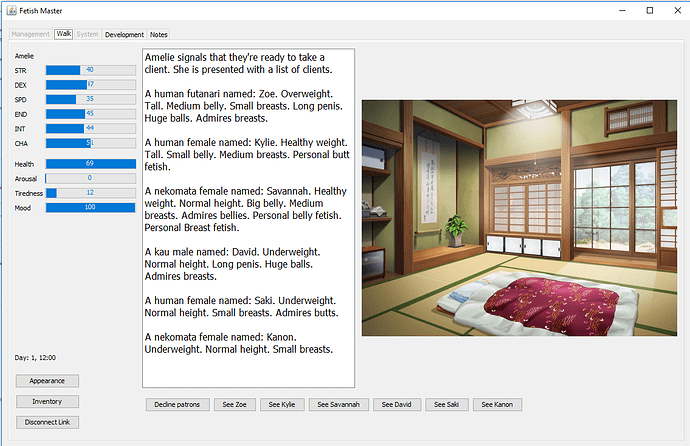 Here is an example of the generated text I’ve been working on. The option that gave this was the “brag about belly” option. 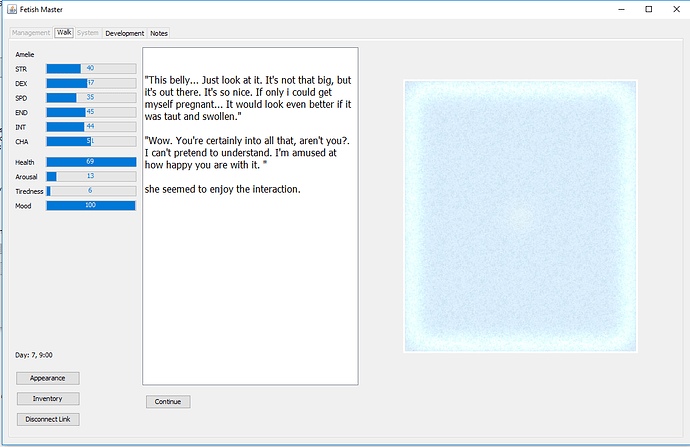 Here is the same choice except the proxy is fatter, not a pregnancy fetishist, is a gainer, and has a more open and playful personality. Also the person they’re talking too like bellies instead of being someone new to the whole belly thing. 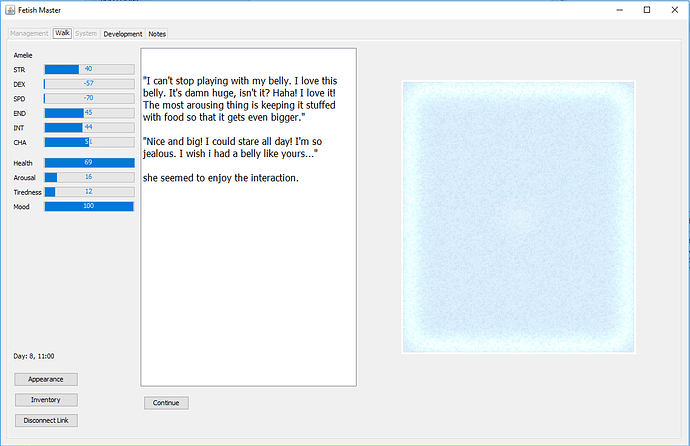 It sounds like you’ve made a lot of progress, and that all sounds awesome. Of that, I think I’m more interested in the NPCs, casual talk, and interactions with the proxy than the locations, at least in the immediate term, but maybe I’m weird like that. New systems more than just new content. Mid and long term, I’m excited to see all of it.

Have you considered just wrapping up everything you’ve got done now, and everything that’s almost done or can be finished without too much time+effort on your part, and release that as a quick update. And everything that’s not as close to being done, or would take more time+work to finish up, or stuff that’s waiting, dependent on stuff to be in the first release: all of that gets kicked down the road to some future update. Or split it up by feature set: NPCs vs New Location vs Rework + Scraps.

Gotta watch that feature creep, and infinitely extended deadlines, especially when working by oneself. I know, that’s where most of my hobby projects fail

Don’t i know it XD

I have considered partitioning stuff and making smaller releases, but there are features of the new trait systems and what not that tie in closely with the npc system and taking them apart loses something i think. It would also take a bunch of work that i would rather put towards finishing things. The new locations and traits are all in service to the NPCs pretty much.

I’m really excited with the NPCs system. once all the content is fleshed out it really opens up the road for other cool things in the future (like dates, relationships and what not. No promises there, just saying it’s something I’ve thought about)

Glad you’re excited about it though! I am too!

Wanted to post a quick update and a story.

I’ve been slowly pecking away at more dialogue stuff. On a whim i redid the belly rub event during sex. I thought that it was a waste to make all these personality changes and not have it at least come up in sex. I love bellies. I would be remiss if they were neglected. So now you get a little bit of personality based dialogue when you rub you partner’s belly. I might go back and take a pass at the belly smothering as well, but for the moment I’ve completed that whim and moved on. Right now i’m making an even where you offed to forcefeed/stuff an NPC.

You can come at this event fro ma few ways. You can access it at any time if you have a feeder or fat admirer proxy. Or if you got the NPC to agree to feedings through other dialogue, you can access it as well. Using it shows some dialogue from both you and the NPC. The NPC kind of talks to them self explaining some of the pros and cons, then decided whether or not to go through with the display of gluttony.

So i was doing an initial test of the script for if an NPC doesn’t have any fat appreciation traits (so they’re far less likely to accept the invitation. So i find a random NPC named kayla. I introduce myself, and immediately suggest stuffing. and she responds with this patched together dialogue:

“That’s a weird thing to suggest. Let me think about it… I hardly even know you. It sounds like a good time. Lets start.”

Apparently Kayla is down to get stuffed by like anyone any time. I might have to tweak the number a bit! haha!

Been chugging away adding more flavor dialogue: NPCs talking about their job and hobbies. They have a choice of like 5 random lines to talk about their hobby or job as a base. I plan on adding more (especially when there is room for fetish stuff to be talked about. For example a soldier who has the job of soldier will already comment on their belly if it is big. I thought that was an interesting topic. An interesting juxtaposition.

Another thing i did tonight was reorganize file structures. Specifically for items. Unless you look under the hood this will not be very noticeable. I moved things into sub folders so now all the food items are in the food folder, et cetera. As a consequences, i introduced a minor save bug. Nothing world shattering, but events that check for having a specific item, will not register you as having that item if you obtained it in an earlier version. If the item is food, you can still eat it just fine, it seems, but it might have a weird effect with some quests. It’s a pretty minor thing though, so don’t worry.

One last thing, I implemented a very simple drunkenness system. It’s not very simulationy like the rest of the game but i did not care to get into BAC calculations and what not. For each drink you consume some of your stats are temporarily changed. Your lewdness, closed vs openness, strength, and charisma are increased and you dex decreased. I might be missing something too. Anyway, this effect scales linearly with the number of drinks had. Over time the alcohol is processed. It decreases at 1 drink per hour. It’s kind of hacky but it should add some kind of depth. basically if you drink 5 beers then you will get all the stat benefits/penalties at once and they will slowly decrease over time. You will be able to offer npcs drinks. Getting them to drink enough may make them more likely to accept things by making them temporarily more open minded and lewd. This was a whim thing, but it’s already done except for some content around it (that would have felt like it was missing without it honestly.)

Man, you are torturing me. You keep telling about awesome stuff, but there still no update :3
You are doing the great job, it’s nice to hear news from you

Is there any way to beta test this WIP version?

Nope. It’s not really in a place where beta testing would help me. The holdup is on me making content: getting all the lines written. The systems are in place and just need to be fleshed out.

Unlikely. Ther’d be concerns over matching style, getting them to figure out the way i have things structured. And then they would have to be someone i trusted as well

What do you mean you have to trust someone first?

I don’t trust random people to help me with my projects.

Why don’t you trust random people to test out your projects?

Because random people are unreliable

Unreliable how? Like are you worried they won’t give feedback or what?

When someone is offering to help test a game what they want is to be able to play it. And what i need from a tester in an early stage is an eye for detail, and a willingness to do boring and repetitive tasks so that i can fix bugs and what not.

Random people and not the kind of people willing to do that kind of work. Typically it’s some combination of:
-no/limited/bad/unrepresenative/undetailed feedback
-No or low responsiveness
-Untimely feedback
-Extremely biased feedback (like the game doesn’t fit their preferences)

It’s not that I’m worried about it - it’s that I’ve experienced it with my book project and beta readers for it.

Truth be told that i haven’t had the motivation, incentive, or desire to work on this projects for awhile. I have other fetish projects I’ve been working on along with non fetish projects.

But i will offer advice to people offering to test a game for someone: You don’t need an indev build of a game to help test a game. Go though already released projects and find bugs (and provide detailed reports on the circumstances that you found them in). Go though and find typos and mark where they appeared. Provide detailed feedback on the game. Say what you liked and what you didn’t like and then be detailed as to why you felt that way about it. What mechanics added to this feeling.

If you go out of the way to provide a service for a developer, they’re going to be a million percent more likely to ask for help testing in the future.

But the more people you have test it, the more likely you’ll find people who are able to give usable feedback.

Its up to the dev to decide if they feel this is going to be helpful or not helpful. I see the sentiment a lot, and if we’re all being honest, its not coming from a place of wanting to actually help the development 9 times out of 10, its coming from a place of wanting to get access to new content faster. And that’s setting aside the fact that this started with a discussion of helping produce content for the game, not testing it. Most devs aren’t too willing to give up the reigns to randos on the internet, especially since, much like the previous point, many of the aforementioned randos are just doing it to get their fantasy fetish content into a game without doing the hard work of actually making a game.

Is this all very cynical, yes, yes it is, but be honest with yourself. Do you actually want to help someone else create their game, or do you want to add your own page to someone else’s book or get an early peak?

Haven’t you heard of casting a wider net? And yes, I would like to help him.