Hey, so I’m working on a race of sentient humanoid cheeseburger people for Dungeons & Dragons. I’m looking for ideas and critique so feel free to tell me whatever comes to mind! 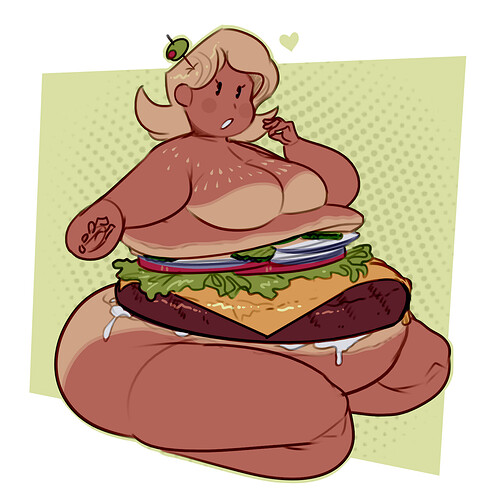 I don’t mean to be negative, it’s just…other races where one’s own form would be theoretically consumable - marshmallow, slimes, cheese golems, any other miscellaneous race one might normally expect to see or imagine - are more of a homogenous ‘construction,’ and could more feasibly be imagined as able to be ‘alive’ and to be capable of regeneration. Even without normally imagined ‘organs,’ something like a slime could have structures and functions similar to an organism like a fungus. You’re talking about a being comprised of the various processed and reformatted parts of other organisms, with theoretically no actual permanent connection between whole sections and/or systems of their biology. And, I do say (but loosely) “biology,” as the picture above suggests a humanoid that functions and appears at though organic, despite apparently having to have the animation and characteristics of a magically-animated golem - yet, unlike golems, is both so close and far from being ‘human’ that they’re very squarely in the realm of the Uncanny Valley.

Maybe this doesn’t seem as bad to others (which is weird, as I thought I am the abomination in most places), but I can mostly just picture seeing her with the patty and toppings scattered to the floor, her top half crawling at someone with hand outstretched, asking to be reassembled or consumed…and it’s more chilling than a frozen White Castle slider on one’s neck.

Whereas seeing such a scene with a cake golem, while functionally the same, evokes more thoughts of ‘well, I can just plop them back together, and they should theoretically be able to fuse back into one whole,’ this one makes me think 'while they already weren’t whole to begin with, they…weren’t whole to begin with, and I’m basically just stacking their constituent parts on each other.

Far be it for me to say ‘do no do this,’ because chase your bliss. But, I feel like it should be made clear that some people will see this concept as I do, and why. If you’re bothered by this, perhaps a re-design to something more akin to a burger-themed pocket sandwich, or a looser golem of mixed burger ingredients (maybe you did that, I haven’t even read the document yet). That way, you can actually picture a more uniform being that’s able to actually ‘heal’ and repair in at least a pseudo-organic way.

…that picture legitimately makes me wonder if, even as a magical golem, she’s actually a colony of symbiotic organisms, and not a single one…

Dungeons and Dragons is a world of magic. I didn’t intend to go for the body horror angle. All of the ingredients are intrinsically linked together through magic, and can regenerate/reassemble themselves if they get into an accident that would make them fall apart. While they resist slashing damage, piercing and blunt damage are fair game.

I would imagine resisting blunt damage, as the bun would be soft, and many of the other ingredients bouncy/pliable. I’d think they’d be vulnerable to slashing, if anything off of standard, due to incisors and knives normally being how one takes apart a burger. Toothpicks are obviously fair game, so piercing follows it would be, too.

You might want to take it off as a rider on their ability to give people parts of themselves, and make it its own trait (I still need to look more, just skimmed for what you were looking for). Maybe make it something like ‘pliable/resilient form,’ and describe it as ‘being made entirely of spongy and resilient parts, Burger-Folk are naturally resistant to bludgeoning damage’. Mind you, looking at it, I guess I can see why you originally proposed resistance to slashing, since they theoretically aren’t ‘harmed’ by having bits cut off. That said, it does make them kind of broken (I imagine much of this does, if I read through it); even slimes, which resist slashing and piercing due to their unstable anatomy, do not regenerate damage.

Social status based on how well arranged the ingredients are, with them often asking people to taste them to refine the best combination. Sometimes several times a day and often with all the ingredients.

The bread part is all that is required, the rest is regular food that gets grown to big burger size when they put it into the gap.

If someone tried to eat all of them, they change the composition of the bread to become more and more stale and hard, to the point of an actually very well defensible shell. To recover from this, they need to get the more liquid dough ingredients fed to them in a well mixed “potion” of sorts, but they can at least survive anything that does not consume on a molecular level or is big enough to take them in one bite.

They could live in farm-villages that have whole families dedicated to one type of ingredient, where the players could earn a lot by mediating the ingredient trade between the more presitigious families. This would result in regular honorary taste tests, which have obvious results after 3 ingame days at least.

They could have the magical ability to turn anything into food eventually, if it is placed inbetween their slices. It just does not taste very well and is stressful, but it should be cost efficient to feed them the dough-potions while they turn flat rocks and random leaves into patties and salads.

Though, the overuse of the potion could cause additional bread slices to be formed, causing them to slowly gain the urge to grow and feed more and more people as they turn into somewhat monstrous burger-centipedes.
Whole forests are under these creatures “protection” as they hold captive farmer humans to gather ingredients and make them organize big parties that often end with a couple especially hungry people disappearing for months on end.
If these people are ever found, it is at least 10x heavier.

Updated Stats
Happy Meal
Burger-Folk may offer part of their body as food for others, regenerating during a short rest and suffering reduced pain. This gives them the fringe benefit of halved resistance to slashing and bludgeoning damage.

I am also expanding the description of the race a bit to incorporate some ideas I found here.

They could have the magical ability to turn anything into food eventually, if it is placed inbetween their slices. It just does not taste very well and is stressful, but it should be cost efficient to feed them the dough-potions while they turn flat rocks and random leaves into patties and salads.

You just gave me a great idea for a new feat! Not sure how I feel about the dough-potion thing, but here’s what I came up with:
Ingredient Assimilation
At tenth level, you can convert non-food objects into edible toppings during a long rest so long as they are non-living and not magic items.

You might want to stipulate the mechanical benefit of creating those toppings. Perhaps allowing you to spend hit dice to heal (which can become too powerful pretty easy, without limits) without actually expending the hit dice - but how much you can convert should probably be limited to a certain amount (functionally, how many hit die the ingredients would be worth) per long rest.

Also, if this is supposed to be based on 5E, there is no such thing as “halved resistance.” You either have resistance, immunity, or neither. I’m not sure there are even instances of immunity becoming resistance under certain circumstances (such as coming from a magical source). It’s part of the design of 5E to help with crunch and simplicity.

Ingredient Assimilation
At tenth level, you can convert non-food objects into edible toppings during a long rest so long as they are non-living and not magic items.

Let’s add to this now:
You can convert as many objects as half your player level rounded down. For every object you convert, you gain 10 temporary hit points.

Also I removed the halved resistance stipulation from Happy Meal and replaced it with normal resistance.