Howdy gentlemen and women !
As a matter of fact, I played a lot of Failmuseum’s WG mod for CK2 recently, and I thought it could be nice to give y’all an aperçu of my current playthrough with an After Action Report (AAR). Bear in mind that CK2 is not, at its core, a WG game, and as such actual fetish-related progress might be slow. But it is a good game, with a lot of shenanigans on it, and I hope my little personal experience will give you the urge to actually try it for yourself, while giving Fail some good feedback about his creations.
I will also use the opportunity to remind y’all that CK2 is actually free to play on Steam, although you’ll need to buy a heckton of DLCs to make it truly enjoyable to its full extent. I do have all the major add-ons, so what you’ll see in my game won’t be the same for someone who only has the free version.
And now, without further ado, let us begin !
PS PLEASE OPEN THE SCREESHOTS IN ANOTHER TAB ! It’s really hard to read CK2’s ant-like writing when it’s only a small part of the screen.

The County of Poitiers, 769 (nice)
Aaah, The Poitou… Its castles, its beautiful landscape, its occasional viking invasions, its complete lack of actual administrative centralisation due to the total collapse of any form of governance higher than a mere duchy… What would be better to use as the start of a new, mighty, totally not fatty kingdom ? 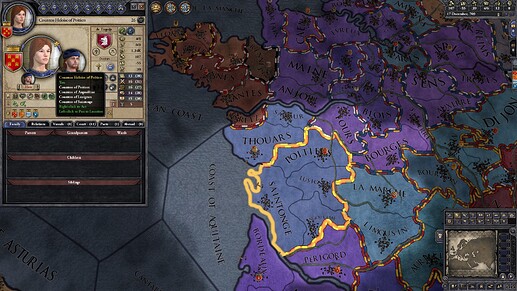 pic11920×1080 665 KB
Yeah, I put the world on Random AND Shattered. the blue territory circled in yellow is mine. Note the County of Thouars, right up to Poitiers, in blue, we’ll talk about it later.
Today’s main character is Heloise de Taquije, Countess of Poitiers, Saintonge, and some other stuff we don’t really need to care as of now. Blessed with a Supreme™ intelligence, she starts her long journey toward total domination and complete ingurgitation as a pretty strong leader in the west of Western Francia. We’ve got good cities, a lot of territories, no vassals, and some weak neighbors to bully : a perfect starting point.
(Also I only really enjoy female WG and it was one of the only good female start okthxxbye)
Our first step is to progress in the nobles’ hierarchy. Even if we don’t actually have any kings in the world, we still need to rise in the ranks if we hope to actually become a queen one day. And by rising, I don’t mean “literally getting fat enough to sit on our own weight” (or maybe I do). 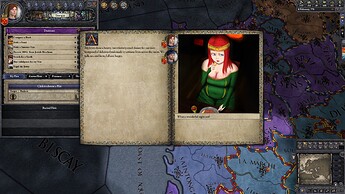 Our first actual step will be to “acquire” the county of Thouars (see first screenshot for reference). By conquering it, we will make sure to be the sole contesters for the Duchy of Poitou, which would be a good start for actually trying to unify France. It doesn’t mean we can’t have fun though, and I decide, since Heloise isn’t exactly a great athlete, to let her indulge in food and delicacies while avoiding too much exercise. I also take as a focus to raise a family : we’re gonna need some kids to perpetuate our dynasty. 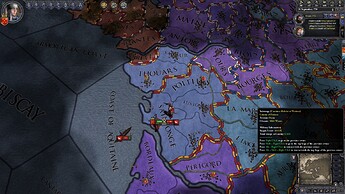 The visit of our very nice northern not-so-neighbors (they’re from Sweden) is quickly dispatched through the use of polite but armed force (which might have implied a very very moderate use of cheating to get some mercenaries quickly, but this is only speculation). Once this matter is settled, we go back to preparing for war (which means accumulating money and baking, obviously). Some diseases spread in the region, but they never actually reach Poitiers, so I don’t really have to quarantine myself. 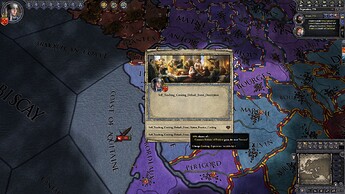 20200607140948_11920×1080 590 KB
As a suggestion, maybe adding some flavor text here would be nice ? At least to hide the ugly coding text
The next few months are uneventful, until I recieve some very good news : I finally have a kid ! The little Charles de Taquije is born a genius, like his mother, which is excellent news. I now have an heir, and a very good one with that. 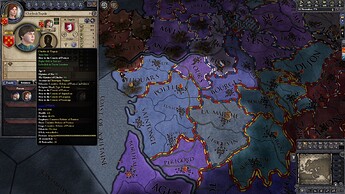 Charles’ birth goes very well, and Heloise’s husband even invites her to dinner a few months after that. I decide it’s the perfect moment to see how much our dear ruler weighs exactly. 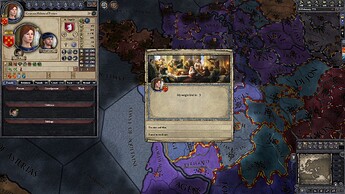 I choose not to exercise, obviously. We’re not here to become athletes, we’re here to become duchesses.
And here we go again for a pretty uneventful few months. Heloise gives birth to another child around December 772, approximately a year after Charles. Since I’m playing in France, I decide to abandon any originality and to call her second son Louis. Seems appropriate. Louis isn’t a genius or anything, and I’m in gavelkind, so as far as I’m concerned he’s more of a nuisance than anything, but he shouldn’t be a problem right now. Heloise isn’t of my opinion : she loves both of her kids and breastfed them, giving them some bonuses.
Now that the dynastic situation is somewhat resolved and that I have enough money and piety, let’s start a war ! 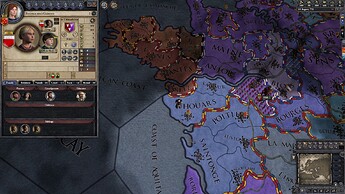 The first actual step is to create an alliance with the Count of Nantes, a small five-year old kid. I betroth Charles with his sister, and I ensure his support in case of a war. I guess I’ll have to take “goodoogabagoo” as a yes.
Next step is pretty simple : I go see the Countess of Thouars (another child), and I declare war. Immediately after that, mobilization orders are given.
The war is actually very uneventful. The Count of Nantes accepts my call to arms and starts besieging the County of Thouars, while my forces intercept the enemy army in Saintonge and quickly dispatch them. Then, I redirect north, towards the County of Saumur, and start besieging it until the little girl capitulates and gives me Thouars. And just like that, Heloise literally bullied two kids to get some lands.

But something far worse than a mere war is coming, and almost completely destroyed my plans. 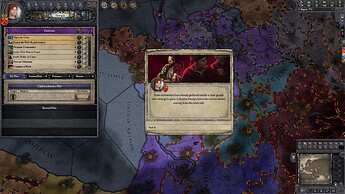 20200607142415_11920×1080 658 KB
At this point, it was already too late.
During the last weeks of the war, an outburst of Camp fever happened. People started to die as the disease quickly spread out, going as far as Saintonge and, unfortunately, Poitiers. I tried to seal the gates, but since I only did it after the end of the war, the disease had already entered the castle. Even worse, it was at a time when Heloise was actually pregnant !
So, let’s say that when the event to define my diet triggered, I decided to take the lightest option available : gonna need to avoid consuming all the food in one go… Although, Heloise didn’t took it very well, and started eating A LOT, mostly because she was craving for her kid. So I guess she couldn’t really follow the diet I fixed to her after all. 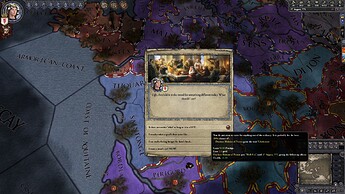 But, if you’ve got good eyes, you might notice Heloise’s hat changed : that’s because she’s no longer a Countess, she’s the Duchess of Poitou now ! \o/

With the first step of our long journey completed, I looked forward where this adventure would get us, and then the real problem appeared. 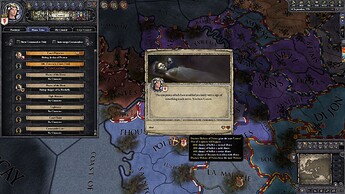 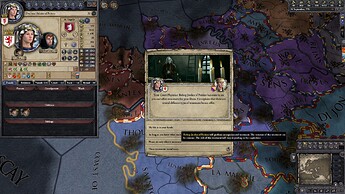 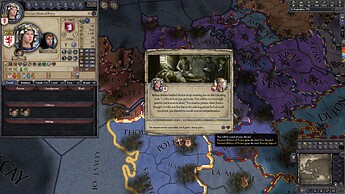 20200607142753_11920×1080 669 KB
Motherfucker CUT HELOISE’S HAND TO CURE CANCER. AND IT WORKED.
So, now that hand cancer was dealt with (don’t forget to always wash your hands after fapping ! OR ELSE), I could finally get ready to see Heloise give birth to her third son !
Motherfucker had a son right after her doctor cured cancer by cutting her hand, while they were in quarantine. Fucking legend. 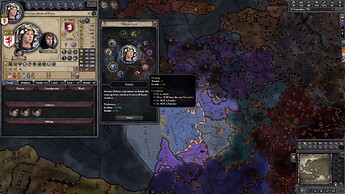 And with that, folks, ends my first AAR ! Hoped you enjoyed reading it.
In term of feedback for Failmuseum, I would say several things : 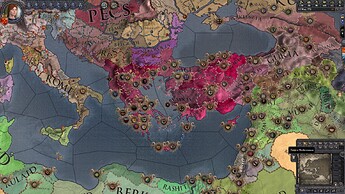 Since SOMEBODY needs to make a reply, I’m going to.
I love your narration. Though I honestly haven’t looked through most AARs on the paradox forums. It works and I’m eager to see this dynasty grow and conquer.

You want a good female start? Be a Hausa matriarch in Africa.

Thanks ! Unfortunately I forgot to add a mod (Luxuria Fantasia) to actually get everything the mod has to offer since some of its mecanics are tied to this mod, so I’ll probably have to start again this AAR with a new dynasty. I think I’ll try to post like once or twice a week, so stay tuned because this new part is probably coming very soon™ !