Hi, the Name’s Mad’N Evil, been a longtime artist, and trying to become a bit of a game developer. And thus, I thought it’d be a good idea to come onto this forum and pitch this idea as well as look for help so I can get past some technical issues/hurdles since I’m a complete noob at the programming aspect.

So, as you can see, this is currently unnamed atm, and I know that doesn’t sound totally original lol, but I don’t plan on keeping it unnamed forever, but here’s the idea for you guys to see:

Welcome to the world of Broken Havens, a place filled with countless races of people - Foxes, dragons, deer, rabbits - Countless races that live in varying countries and creatures that roam the land. With magic and technology mixed together, the citizens of the world try to survive and thrive.

We follow the three following characters:
Cherry:
An alchemist guild member apart of the Gear Daze Guild, who’s got one goal - to pay her rent of her apartment. As such, she takes quests that pay a lot of money but subsequentially have a lot of danger to them, and it’s not unheard of that she comes back a bit battered and bruised sometimes, but that’s part of the job in order to maintain her life style

Gameplay: Standard fair for RPG maker games, dungeon crawling, exp, some overly complex and parodied story that makes fun of tropes and such (or I hope so), but the real idea is where you and your partners gain abilities that can expand certain enemies, or expand yourself -

I’m not expecting this to be done within a week, I’ve got a lot of work to do especially considering how much I want the game to look good and have a bit more fun with the designing. I do need a little help, since no matter where I go, I can’t find a tutorial for this:

How do I change an enemy’s sprite when you inflict a status effect in RPGMaker MV? Do you require a specific plugin or something? When I attempted to do this, I wasn’t able to do it since there aren’t any tutorials that I could find that explain this.
And I’ve got the sprites ready, like here’s an example: 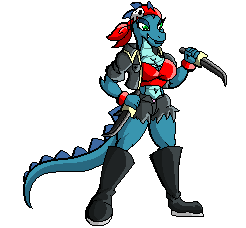 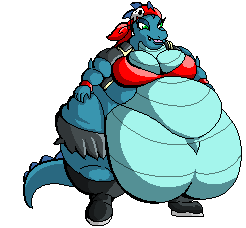 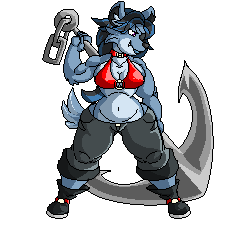 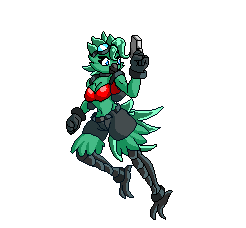 I will have more questions and such since this is one of my first… actual attempts at making a game, outside of messing around and making visual novels (and no, I will not link you to those, those are probably the most cringiest things I’ve ever made, and considering that I’m a fetish artist, that’s saying a lot lol).

This forum and me announcing this is to light a fire under me, so I can actually get work done. thanks again.

Duuude, it looks amazing! I’m totes hoping it becomes something legit in the future! Best of luck!

wow, i really enjoyed it, I miss a good fat fur rpg,but if you allow me to ask, will it be strictly focused on women? or is there any chubby guy out there? whatever the answer i can’t wait to play it sounds great !

I’m not against the idea of there being fat guys in the game, and I did plan on a male party member later on, but I’d like to get the first build done before I set anything in stone.

would their be any “permanent” weight gain?
by the I mean weght gain that dosn’t go away like a status affect but has to be lose over time or diet and could have the reverse done and more gained.

I understand, take your time. but it’s good to know that. the game is looking great anyway and I know it will be good

Let me put it like this, I’ve made overworld sprites where the characters are bigger, they are status effects, but they can stick after battle. Of course, that’s the idea that I have planned, I still need help with the programming and hopefully someone can help me understand the more difficult aspects of RPGMaker MV.

To answer a question since I have to wait 8 hours to actually reply again, the characters Cherry, Club and Lime are the following species:

ah cool. thanks for explaining

if you don’t mind me asking?
will their be a customized player character or just some premade.
either is fine I am just asking becuase being the dragon fanatic I am I would love to play as a dragon

It’s awesome to see another artist I love trying to get into games, and this already looks quite promising~

@rocketshark5089’s game features changing battle sprites, so if they’re willing, they’d be a good person to ask; I presume that the general flow between VX Ace and MV, change from Ruby to JavaScript not withstanding.

I’d look into plugins, too. Yanfly’s got a nice selection that all generally play nice with each-other. He’s also got a lot of videos and documentation available for them.

I do need a little help, since no matter where I go, I can’t find a tutorial for this:

How do I change an enemy’s sprite when you inflict a status effect in RPGMaker MV? Do you require a specific plugin or something? When I attempted to do this, I wasn’t able to do it since there aren’t any tutorials that I could find that explain this.

When it comes to technical knowledge of RPGMaker @PeachClamNine tends to be quite knowledgeable. @Grimimic and @ShinDirafeh might also have some resources that might help you. They tend to be quite active on our Discord so you might be able to get into contact with them there if not here.

I would also suggest to ask this question in the Programming Help section as a separate topic. It will tend to draw the attention of any programmers a bit better.

Thanks man, I appreciate that, I’ll think about doing that in the next couple days. I got a few resources of my own to look too, but I’ll definitely hit them up when I get the chance.

Yup, I found that one, thanks!

I would also suggest to ask this question in the Programming Help section as a separate topic. It will tend to draw the attention of any programmers a bit better.

Sure, I’ll get on that later today, thanks for the help.

You can go ahead and use Weak Enemy Poses

Oooh, thanks! I’ll give this a test immediately!

I’ve followed your work for a while and I’m really excited for this! Can’t “weight” to play! =D