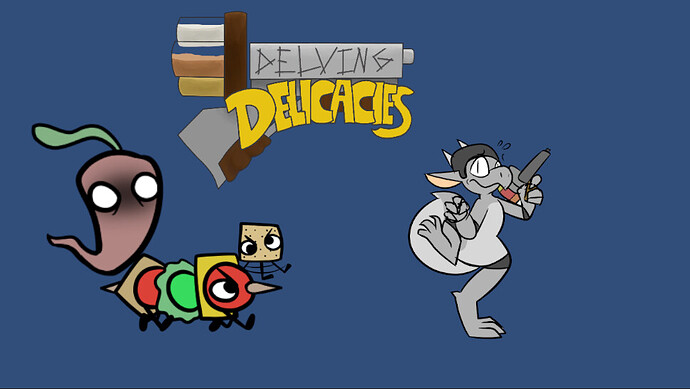 image968×546 73.6 KB
Kobolds and… other… kobolds! It’s time to watch your favorite gameshow, live on Goelthe-Vision! (The only divination device broadcasting classics such as Raiderz, Tiffy the Torturer, and Late Nite with Goelthe!) 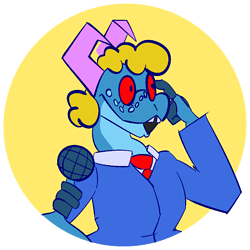 Five lucky contestants have been trained and prepared to hunt down the more dangerous delicious game there is: sentient food. Their objective? Bring back a feast worthy for the greatest draconic ruler in the world - who is also your very best friend: Goelthe!!

Kobolds will scurry down hallways, dodge food-oriented projectiles, and make off with cursed treasure! (Wait did I read that right? It’s cursed?) With Goelthe’s prized weapon the Spice Girl in their mitts, no slightly-dangerous food monster stands a chance! Any lizard can grab a few bits of food and run like a coward out the front door… but a truly dedicated Delver will make it through to the very end of this deadly obstacle course - and then back out with it!

But as you know, Delving Delicacies isn’t without its fair share of twists and turns… If a contestant is kil- erm, escorted off stage, then they leave behind all the food they carried. And as you also know that food’s value is DOUBLED! (Warning: food piles are known to disappear if not retrieved by the next contestant) Add that up with a growing final multiplier, and watch Goelthe’s famous grin widen with delight! But remember dear viewers: as good as it is to fail in Goelthe’s glory, someone still has to walk out the front door with the full haul!

Delving Delicacies is the ONLY gameshow to promise:

Sign up for a free trial of Goelthe-Vision today and watch an episode of Delving Delicacies IMMEDIATELY!

Link to the game!

This episode of Delving Delicacies has been made and produced by…

Wildcards used:
Progress through Failure - Player’s final multiplier stays the same between kobolds/lives. If you want the best ending…

Great game with some good gags along the way. The monster artwork and animations are actually hilarious. I loved the use of the wildcard, both from the multiplier and food drop on death, and the bad ending. It’s got a fun gameplay loop of learning the rooms / traps and coming back more prepared the next time. I loved that the red fork traps became more relevant while being chased back to the start by the carolina reaper pepper lol.

A couple items of feedback:

Let me start by saying that this is my favorite game form this years jam, there’s so many things that are fantastic about it, from the games theme to the HUD looking like a gameshow, to ALL character designs; the monsters, the kobold and Goelthe, its all GREAT! I never expected a game to be like Smash TV from this years jam or for the concept to work so well either!

I also got some feedback for ya

I’d love to see either this idea get worked on some more after the jam!