Before he pulled Boundless down and quit, Roy/leupai had several other small projects he was working on. One of them was a very short text-based choose your own adventure that took place in the leupai universe he created (it centered around eating chocolate cake until you almost exploded), another was a leupai character creator of his that may or may not still be around in some form, and the last was a resource management text game called Elflands, which focused on creating a wilderness settlement with elves and fattening the general population up to ludicrious proportions.

Resources to construct buildings and expansions with included some rather interesting and unique things like Trees, Marble, and Roses, and the primary jobs you could assign citizens to were very elfy, such as Druids, Rangers, Hunters, and Sunblades. Various wild animals such as deer could be captured, fattened up, bred, and butchered to create meat, and it was also possible to capture dragons (which served no purpose yet to my knowledge) and humans (which could be fattened up, bred, and butchered like deer but doing so would bring humans after you). You were encouraged to fatten the population to well beyond immobility levels (they can still do their jobs because magic), but winters were harsh and real effort had to be invested into creating a system that could maintain the grossly decadent lifestyle the elven population wanted. Turns progressed in ticks, measured in days, and it was actually a really solid resource management sim in addition to being a weight gain fetish game. It could also be turned into a pseudo-idle game by automating ticks, but the game wasn’t really meant to handle that and getting everything sustainable enough so you could walk away from it wasn’t really possible given the structure of the game itself.

Elflands was by far the best and most fleshed out of Roy’s side projects, but it was also a hosted, in-browser game. When he took everything down, he didn’t renew any of his domains, and Elflands went with their expiration. Boundless still exists and can be downloaded and played, thanks to venturega.me, but to my knowledge, Elflands isn’t being hosted anywhere. I actually had a working version of it saved that could be opened and played in Firefox, but recently suffered a hard-drive failure and lost it. I was wondering if anyone ELSE saved the game, or knows of someone who did, so copies of it could still be passed around and played?

Never tried this one before, but now I’m curious about Roy’s other works.

y’know, while we’re on the topic of lost stuff made by leupai, i distinctly recall some kind of tech demo thing that i once had in a folder that came with this. think someone on a wg related discord passed it my way. think it was just named “sfx” or something along those lines? anyone got that?

Assuming you mean this: 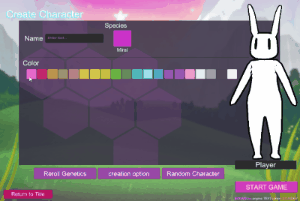 I’m pretty sure that it was hosted on revecroir.net, however I don’t remember the subdomain that it was under so if there is a way to search that you could probably find it.

EDIT: Or the “path” of the URL IDK

EDIT 2: Think I found it: http://www.revecroir.net/dreamshard/

shame we cannot petition him to start it back up

Thank you so much for posting this. I’m actually amazed anyone still had a copy. Roy never really advertised Elflands, and it was one of the projects he started near the end. As far as I can tell, this is the latest version of the game to exist. It has dragons and unicorns, but they serve no purpose I can tell and are obviously not fully implimented, the Bakery exists but you can’t actually assign elves to work there (it just deletes them), and it caps you at 500 pop and demands you construct a building which doesn’t actually exist to progress. Those are the outstanding bugs and additions that the very latest release of the game had before he rage-quit development of everything. I believe that is the last version that was released.

Roy was always somewhat unstable, but the one thing I always liked about his games was the general lack of documentation or instruction. You were just expected to discover and find things out on your own. Which is why I say things like “I don’t believe the dragons or unicorns served a purpose yet,” because I’m only somewhat sure that’s even true. His flagship game, Boundless, is pretty much the flagship example of that philosophy, but you can see it in Elflands as well. It’s hard to tell exactly how much content any of his games actually have, because it’s always possible that you’re missing something. And you usually are.

I don’t know if anyone in interested in picking up Elflands where Roy left off, but it is, in my opinion, one of the better weight gain games in terms of just idle background entertainment. The problem is that his programming was always rather strange, and more than once people have remarked on how much more difficult he made things for himself by choosing to do some things in certain ways.

yeah, his games were pretty good, it was stupid for him to stop development on them, wish we could find where he is and get him to start them back up

It’s weird, and I don’t know the exact trigger for it, but at some point after loading a save, I was able to start assigning Bakers without them being deleted.

yeah, his games were pretty good, it was stupid for him to stop development on them, wish we could find where he is and get him to start them back up

You miss the part where Dasho said that Roy was unstable? Tracking them down and demanding they start working on these games again is the last thing they need.

I did not mean force them to start their games back up, I mean convince them to do so

You may mean well, but there’s no nice way to convince someone who’s burned out on a project to return to it from an outsider. It has to be something they come to on their own.

Given the way he left, I doubt very much that he’s coming back. Roy was always a bit of a prima donna, and he was often ridiculed by the broader fetish game community for certain quirks of his, like his obsession with claiming that every single thing he ever posted or talked about belonged exclusively to him and anything that had anything in common with it at all was theft even if it came first, or his insistence that all of his games are “horror” games and not actually fetish games at all, which is a blatant and bald-faced lie. Not only did he seem to think his ideas were going to make him rich and famous, but he was pretty deep in denial about what the games even really were.

The pushback he got for certain attitudes and behaviors, combined with his own predilection for drama mongering, eventually reached a breaking point, and he had a massive blowup/meltdown. I doubt VERY much that he’s coming back, and if he does, it will be under a different name and identity doing something totally different. I’m not a fan of psychoanalysis, but I think Roy is honestly too prideful to go back to Revix/Leupai now, after everything that’s happened to sour that pot.

If Boundless or Elflands ever get expanded on, it would have to be from third party people like us doing it for free because we want to do it, as always. I’m decent at writing but trash at programming, which is one of the reasons I’m interested in Roy’s projects in general and Elflands in particular. It’s simple enough that I think I might be able to do something with it, if I could understand what the hell he was even doing to start with. I honestly know nothing about Twine, though.

Fetish material and Horror aren’t mutually exclusive. I certainly found the horror angle more interesting than the fetish-friendly stuff in his work half the time. After all, in the eyes of someone without a specific fetish it IS pretty horrifying. That applies to a lot of fetishes, not just WG and doubly so if it’s non-consensual.

My problem with it was more how his OC Do Not Steal races were presented and treated (which iirc was a personal thing for them and related with their management of mental health issues). It really seemed to undercut the whole thing, as did the insistence on pseudo-french conlang to obfuscate everything.

still, he overreacted over something petty and shut down his work for no reason

My favorite part was spending 5 minutes trying to roll a specific arka, but still ending up turning into a goddamn leupai like 8 minutes later.

How do we feel about Engine Nineteen?
http://www.revecroir.net/dreamshard/

I actually try to become a Leupai intentionally for the powers, but I always have trouble trying to get the right number of eyes and limbs that I want because dang randomization

I think that kinda harkens back to cheddar’s “Original Race, Do Not Steal” comment: Leupai are made to be too powerful. I mean, it’s just kinda “whatever” in the lore that they’re essentially all-powerful, all-knowing, can-do-no-wrong, etc., and I can appreciate what would usually be relegated to “lost precursor race” being allowed to actually exist in the game, but… This is probably why they usually don’t as-is.

Roy probably justifies their power level by railroading all characters to become leupai. It was kind of interesting in the lore, I guess, but it doesn’t play well; or, rather, it’s not satisfying. I might as well have not actually chosen a race. Maybe that’s the point, I guess?

yeah, when you put it in terms of lore like that they are awfully powerful, and you can’t really tell what is a leupai because they come in all shapes and sizes and can even alter their appearance at will, shame the appearance altering power is not in the game to allow us to decide how many of each body part (arms, legs, ears, and eyes) we have as a leupai

One of the big challenges I ran into was becoming a Somnian instead of a Leupai. I was rather irritated when I finally succeeded. On the wiki, it was said Somnians had access to some fairly potent spell-like abilities, but there was nothing. Perhaps it was something to be added later, but it certainly wasn’t present at the time.

And, to be very honest, playing a Leupai in that game was fairly dull. Not as bad as the fyynmorph, but still. A lot of the stress of exploring that strange world just wasn’t there once you crossed that point.

yeah, becoming a Somnian instead of a Leupai is a waste because the powers for Somnians weren’t added in before Roy foolishly stopped his work, though he could have used the Leupai powers as a placeholder