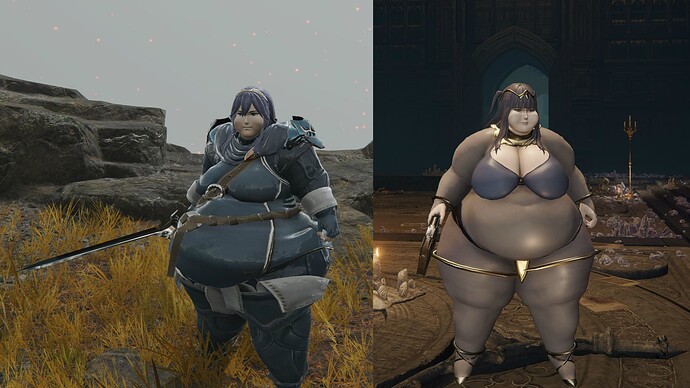 Lucina’s basic outfit replaces the Vagabond set, the “armor broken” version replaces the Knight set that can be bought from the Twin maiden husks, and the promoted and masked version is Radahn’s armor. Her sword replaces the LordSworn sword.

No Scabbards mod is recommended, but make sure to paste and override Lucina’s sword wpn file AFTER pasting the files from that mod.

For some reason my character’s ER face shows through the face of Tharja, but besides that solid work on this mod. I’ll have a look at the regulation bin you mentioned in the Nexus Mod reply. You did great on Tharja’s arms, they look very nice and soft. Could you share the blender file with the Elden ring skeleton so I could have a look at how you did your weight painting? I have a similarly sized character I am working on.

Sure I don’t mind dropping them here: Lucyina-TharjaShare.zip - Google Drive They’re version 3.0. You might just be able to just transfer the vertex group data from these to your model, it’s not perfect but it works pretty well. Also, keep in mind that there’s a limit to how many vertex groups a vertex can have so you have to do “limit total” mostly this doesn’t mess with the weights, but it can mess it up a little depending on the model, the hair is a little messy because of that.