Howllo Everyone and welcome to my entry!

Run a business that may be selling fattening products 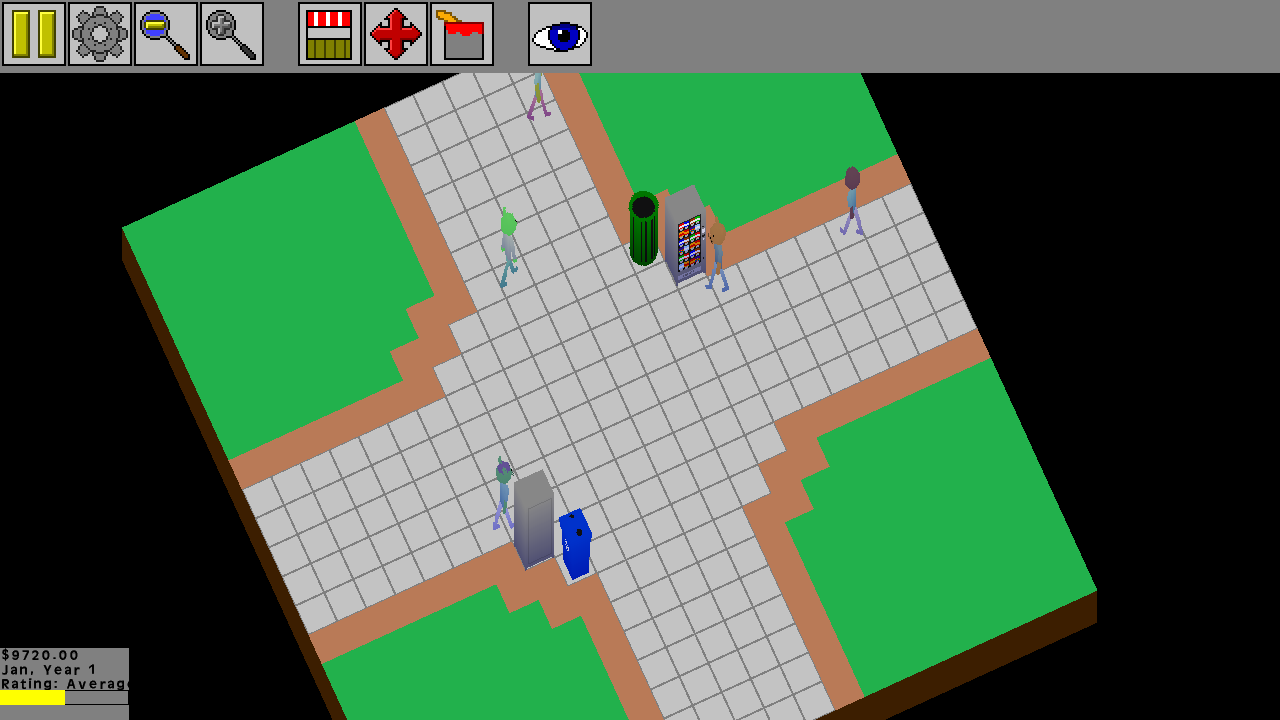 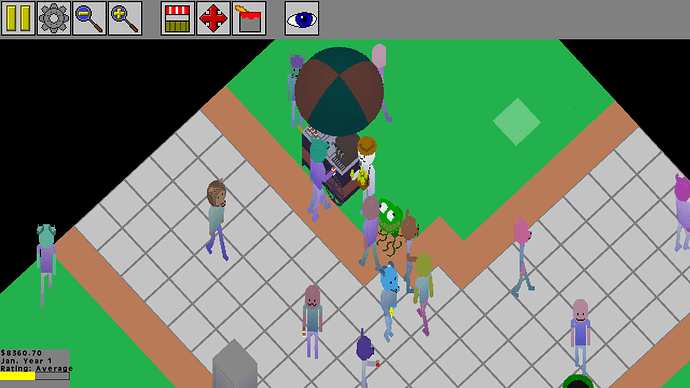 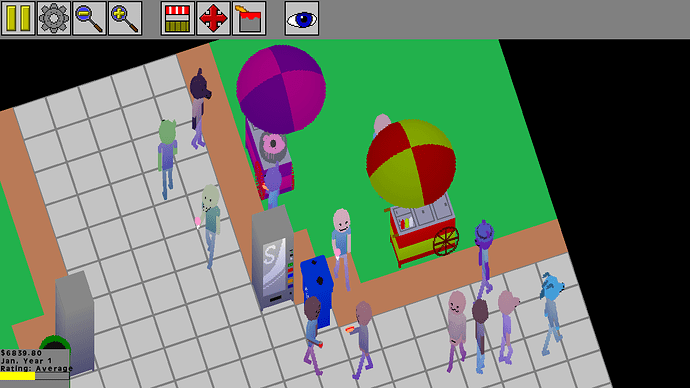 Credits: This game was created by me alone, sounds were found on freesound.org and the music was generated from Strofe.

If you find the Easter Egg in the Void, here is the controls for them. I didn’t get enough time to work on it, but I didn’t want it to go unseen.

chill little idle-y game, wish there was more game to it but the graphical system clearly ate a lot of dev time; the menu and navigation are unusually accessible for a game here, overall great work

I really liked this entry, it has great potential for expansion and further development (i say as a lover of tycoon style games)

The furries don’t have have tails 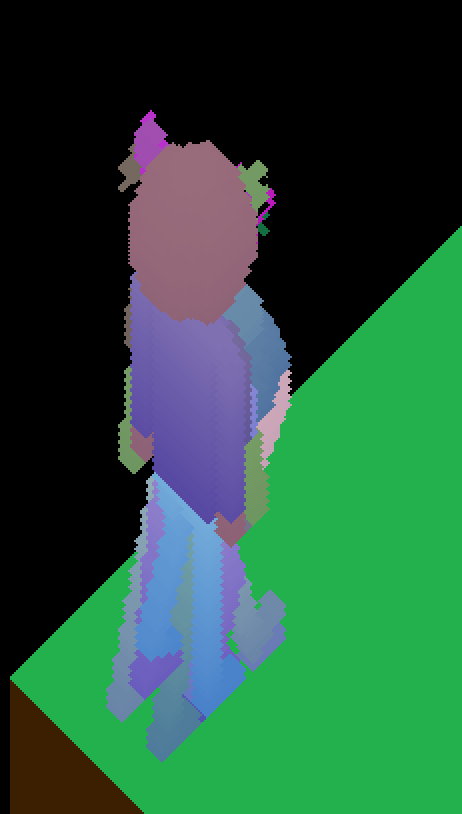 First of all, i want to thank you for having all kind of options, from human to furry, from male to female. As it can allow someone with a more niche preference to enjoy it in how they like. As for the game, i like the concept a lot and i think downsizing for the jam was a good idea and i hope you return to it and make it grow. As from what i played, i left the game going, only checking the beeps to see if there was a need but most of the time, it said i was doing good and the plus size was the new norm, i left it for almost a year going but would only see 1 or 2 fatties at best, they seemed big but not as big as 17 weight sizes big, also the rating only climbe a bit to okay at best. So would like to know if it was something on my part or something that can be fixed for future.

Apologies for the delayed response, I had to catch up on irl demands after the jam ended. So now I can properly respond to y’all :3

@plubber
Thank you, the game idea had a more active loop for the player but it took longer to develop than I originally thought. I finally got to give it a proper play test (which I should have done instead of adding hats, but live and learn) and found that my game may have evolved into something else that I wasn’t even considering. The intent was a tycoon style game but I accidentally created a sort of “people watcher” style game once it finally gets up and running. Which begs the question, who doesn’t love watching folk slowly getting fat

@Snaccaca
Thank you, and this game TOTALLY has room to expand and become something bigger XP I hope to update this game sometime soon after the jam judging is over.

@ARKLYWaT
Add tails in the future, got it. And I’m glad to hear that its running fine in wine, I have the license to export to Mac, but I don’t have the environment to create it. (I’m assuming your using MacOS, unless the Linux build is doing something stupid). As for the bug, that’s starting to become one of the bigger issues I need to fix. I had a small patch for it, but by the look of your pic the bug is more serious than I initially thought

The game will be getting an update to iron out bugs and hope to get this one squashed as best I can.

@Kaiser.1
Your welcome, I thought the game would have been more fun and catering with a variety of options for a custom experience. I’m slowly getting better at the creation strategy for games, start small and go from there :3
And you had it running for about a year, now that’s a level of dedication since that’s over an hour of game time XP The play loop is unfortunately borked for the jam version as some values were misread, so what folk need to know (if their reading this luckily) is that “Okay” is the highest rating that can be achieved, there is something called ambient/atmosphere rating and you get bonuses for having sets on the map, however atmo is borked and reads theme IDs, so that creates the problem for ratings to suddenly dive bomb as there is the theme ID = -1. So the only things with theme ID is “Red Round”, “Stands”, and “Machine”. (The atmo bonuses are still working, so some objects help with that). Now why bring up invisible atmo variable? Because it also influences the chances of characters getting fatter, and how much money you make. As for the weight level concern, the weight stages are very minute and require a little observation on the player’s part, usually you can tell their weight level by looking at them from the side. If there belly looks like it lines up with the tile’s edge behind it, then they are probably max weight. I do want to mess around with a render system to make weight variance more visible, yet still subtle. I’ll be releasing a patch sometime soon so you and others can just spend a month getting it up and running rather than an entire year XP

Thank you all for your feedback, supportive words, and bug reporting! I just have a question for y’all: Have you found and played with the Easter egg I mentioned in the post yet?

Fun little game though, I mostly lose money consistently but that’s not exactly novel for me in tycoon games lol

Not bad, I hope this gets a sequel.

There are certain things I’m not entirely sure about in this game, like why the vendors occasionally vanish and take 400$ with them, or what walls and decorations do. I suppose this is simply down to how early of a version this game is. Regardless it’s pretty fun watching people trot arround and buy stuff.

Time to respond to more comments!

@MightyHalberd
Sokay that you didn’t find it yet, its hidden in the void kinda well. So as another hint, I suggest picking a direction relative to the map, and move that way with the middle mouse movement. Should be able to find it in about two+ strokes of the mouse. Remember that to return to the map quickly from the void, you can press [Backspace], [Home], or [Number Pad 7] to hop back there. You could be losing money to Vendors, they are employees that require payment.

@Axxis
Just watched recently and must tell you to press R to Rotate objects XP Something I forgot to mention in my lengthy comment for the vid was that I was slightly sad but understood why you would miss it, you never clicked on the party hats which basically meant all characters wear hats. It was the last icon in options, but again that was more my fault for placing it after audio settings and not with custom settings. Xp One more thing, the first icon in the view settings is to toggle walls to either be visible or invisible. Also, a sequel? I haven’t even begun to finish this game with a myriad of updates XP

@Tombot
I tried indicating that Vendors were an employee type and would require a paycheck, and if you don’t have enough money to pay them then they will otherwise quit and incur debt on you. If they are vanishing why you still have money to pay them, then let me know as it could be another bug I didn’t catch. Walls were originally implemented for constructing buildings, but I ran out of time implementing that system as I hadn’t had the game loop installed when they got implemented. Decorations were to help increase the “atmosphere” rating, but got borked in this initial version as theme id was being read instead of the atmopoints. So theme items and set bonuses will benefit you in this version, while the coming update will fixed the system entirely and have the game play as intended (with some extra features hopefully~)

Thank you all for your time and responses! Have a nice, safe, and fun day everybody!

Howdy there! Had to make an account for this, kinda just let the game run after getting a system going; on Year 3 now, and just wanted to let you know the yellow Rating bar goes past the border if it gets high enough, and as far as I can tell doesnt stop! But otherwise enjoyed what there is so far :3

A fun little idle game! It was nice being able mostly chill as the passive income came in and focus more on the aesthetics of what I wanted my food court to look like (I also ended up devoting a corner to “the orb”). It would definitely be fun to see larger maps and more things to build, and maybe a challenge mode or two a la roller coaster tycoon.

And the comments keep coming!

@Kemonodad
Thank you! And thank you for giving it such am extensive test run. The rating bar was not properly limited so its sorta fun and silly to see it keep going (they must REALLY like your place

@Chubberdy
Thank you! I went with a semi-small map (23x23) since I wasn’t sure how well the game would run frame rate wise, but as I improve the rendering logic, bigger maps shouldn’t become an issue :3 I’m quite curious what “the orb” is and would like to see it sometime :oc

Thank you for your suggestions and bug reports! I hope the next version will be pleasant :3 Have a nice, safe, and fun day!

amazing game, just had one question: does the female/male option make any visual difference?

Just have to ask- is the engine based on any old projects you had on hand? reminds me of GtG from a while back.

@tovarishchwater
The game does borrow some drawing techniques from the GtG Pseudo 3D version, but other than a few utility functions I use for most/all of my games and some pre-existing sprite stack code (which I learned from a few online tutorials), the game was made from scratch. I used the art styling as an excuse to try and revisit the sprite stacking technique as I do want to continue development on that GtG version. So once I comfortably have a nice library and understanding of using it, I’ll revisit Pseudo 3D Grain to Gain and give it some much needed love~<3