Hey, remember me from the Chubby Cultist Girls idea? Well now I have an idea for what is essentially an open-source setting with a strong super hero and weight gain theme! By open source, I mean you can pretty much use this concept wholesale for whatever chubby super heroism you want to write for. This can mostly work for tabletop games, but if you want to adapt it to other game mediums, go right on ahead!
So, here’s an introductory paragraph or two:

Welcome to Monopolis, the biggest Mega City in the world! Located somewhere in the Pacific ocean, this sprawling metropolis is officially the largest city in the world, easily 1,000,000 square miles of pure big city action, segmented into many themed districts. It is here that many of the biggest corporations have come together to construct a commercial wonderland or consumerism and luxury. The people who live here live and eat like kings; eat especially, because Monopolis is not just the biggest city, it’s also the fattest city. Obesity is such a problem that, instead of losing the weight, they built the city to accommodate it’s ever expanding waistline. Medical science, instead of researching weight loss, decided to research weight gain, and alleviating the downsides of it, like shortness of breath and heart problems.
It is here that a legion of super villains, known as The Foul League of Atrocious Belligerents (The F.L.A.B.) perform their dirty work. Led by megalomaniac super genius Dr. Lipidious, they seek to turn this city upside-down in their bid for domination, by any means necessary. Luckily for Monopolis, an elite agency of super heroes, called The Weights of the World, has arisen to meet the challenge. Founded by veteran heavyweight hero Adipose Rex, they seek to protect this city in the name of truth, law, justice, and all things that come with a side of fries!
Will you join the fight against evil and stand for what’s right and chubby, or will you spit in the face of heroism as you bring this city to gasp for breath? Your fate determines the future of Monopolis, its waistline, and the corporations that made it possible!

So there’s the starting concept. I’m gonna keep this here as a place for everyone to expand on the concept, come up with interesting characters and situations, and come back every so often to see what’s become of it.
K thnx bye

Question. I’m wondering if furry will fit in, because Adipose Rex already makes me imagine an anthro T-rex of this world.

Also, I can think of one of the villainous plots being a sort of energy-sapping machine that makes anyone hit extremely tired. Having to eat to regain their energy, they find that they have to eat literally ten-fold of their body weight just to keep themselves standing. And they won’t be standing for long, until a reversal ray cures them. And only the evil inventor of that energy-sapping machine knows how to do just that.

To be fair, Adipose Rex is a writer who’s done vore, hyper-pregnant, and weight gain; human only.

Look him up on DeviantArt, he’s really good.

Oh, I didn’t know that. I looked him up, he seems interesting.

I still wanna imagine an anthro t-rex in my headcanon, though. Oh well.

By open source, I mean you can pretty much use this concept wholesale for whatever chubby super heroism you want to write for.

Since it’s open source, it’d obviously depend on a person to person basis if the characters are furry or not, you could have different multiverses of the same city where it’s either only anthro characters, only humans, or a mix of both.

Furry would most certainly fit, if that’s what you’re into. Humans are great and so are animals! Go bonkers, man!

you could have different multiverses of the same city where it’s either only anthro characters, only humans, or a mix of both.

Absolutely my friend! Come up with whatever heavyset heroes your heart can muster! GO HOG WILD!

I agree, that would be a much better image imo

Just to clarify, the super hero Adipose Rex is a substantially distinct individual from the DeviantArtist of the same name. He is fat, kingly, and a tyrannosaurus man. You’re welcome.

Sounds campy. I could see this being a fun setting for the Supertoon genre in Toon RPG, or throw out the superhero/villain stuff and the city could be good for Shadowrun/waddle.

throw out the superhero/villain stuff and the city could be good for Shadowrun/waddle.

I suppose so. If that’s what you want to do with it, then you can very well go ahead with that.

I believe this should illuminate a few things: 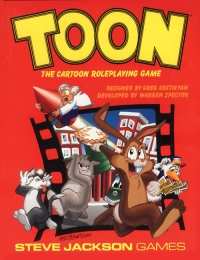 Toon is a comedy tabletop role-playing game in which the players take the roles of cartoon characters. It is subtitled The Cartoon Roleplaying Game. Toon was designed by Greg Costikyan and developed by Warren Spector, and first published in 1984 by Steve Jackson Games. Jeff Dee came up with the idea of creating a role-playing game based on cartoons when he, Greg Costikyan, and several other designers were talking about genres for which game systems had not yet been designed; although they agreed...

Huh, upon further inspection, I’ve deduced that this setting would work exceedingly well for the Toon RPG system. Specifically if you’re leaning towards a more Saturday Morning Action Adventure sort of bend.

That’s cool. Although when I first read it, my first thoughts were kinda like a lighthearted weightgain-themed version of My Hero Academia.

Ooh, that could be another lore point. How common would superheroes and supervillains be? How much of the populace or what percentage of them would be like regular people, and the other side people with special powers?

How common would superheroes and supervillains be?

As common as you want, dude!

Well I mean, quite frankly it’s kind of unavoidable.

Okay, so, potential idea for an adventure if anyone wants one. A mad sorceress goes around the city cursing its citizens with the worst case of bad gas anyone’s ever seen! It’s a level of flatulence that’s so intense it threatens the city’s infrastructure! This sorceress is known as Fartaba, and she is taking out her anger on everyone else because her husband was murdered by a different villain. It’s up to your team of heroes to put a stop to her gassy terror and discover more about her husband’s tragic death.

Adipose Rex is a term used by TV Tropes to refer to fat royalty. Is that an accurate description of the character?