So I’m told this got eaten in the data loss backy uppy thing, so here’s this again; 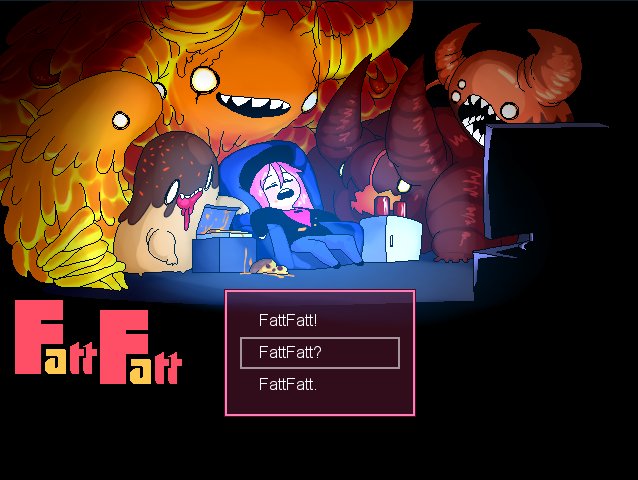 FattFatt is a simple action RPG by the talented arist ‘뎁뎁이’. Defeat various food demons or they will feed Cherry.

I’ve taken the liberty of converting all the filenames, text, etc. into ASCII characters only so any computer can run and play it. I’ve also fixed a few minor annoyances from the original (the MIDI driver taking a while to load on modern machines, leading to a three second pause in the middle of the action, and such like that).

You can find the game uploaded here.
You can find more work by the artist on tiwtter and on Pixiv.

Added the unclaimed tag since you are not the original creator of the game. Thanks for the translation though.

I suppose this belongs here now

So I realized there’s a second ending in this, thanks to peeking at the sprite files.

At the very end, after the final save, once you get the white door to spawn you can backtrack a tiny bit to find a new red door.

Considering how simple the game is, this is something I would never had thought to try if I didn’t see the files for it lmao.

Also there’s a few unused sprites in there that are pretty cute, obviously from earlier attempts at the game. I put them together in one sheet here:

This game was short…But also Very entertaining for at least 15 minutes on it.

I wonder if the Artist making more games like this. It was very good…short but good.

Played Warrant - Cherry Pie in the background on a loop from start to finish on this game. Was NOT dissapointed. <3

There’s a great background in one of j8867bbw’s other games, Tebellyemple, with an ultra-fat Cherry watching the battle. It’s the little touches like that which makes his games so enjoyable.

No, you got it basically figured. Weight gain isn’t the primary focus of Tebellyemple, though there is a bunch of different fat endings to the game. I’ve kind of hit a bump at the end, to be honest. That one boss is a little brutal, and I’m having some trouble getting past it.

Honestly, really started playing that one because I’d already played all the other ones, and needed something new. That guy’s a machine, though, so I wouldn’t imagine it’ll be too long before another WG game hits the market.

I don’t know if you’re tried the last boss again since. It helps if you’ve fought every enemy in the game. They don’t respawn, and clearing them all helps a bunch.

It seems no one upload some sprites from this game, but sorry for bumping this thread. Here is it:

help! im on mac, and when i downlaod this and open the zip file, it puts out a file, and i dont know how to open it. any suggested ways to open it? thank you.

You cannot. It’s a Windows executable.

Without some kind of windows emulation like Wine, Bootcamp, Parallels or something else, you won’t be able to run it on a purely Mac machine. If you manage to get something like Wine running it may work, but be aware it may be buggy/not work as intended. Bootcamp is probably the cleanest option for running windows based programs on a Mac if you don’t mind the Microsoft OS though.

But can it run on Android?

Ha ha, if defeating that boss is hard then the race you have to do after is impossible…

But seriously, after defeating the boss you run towards the gate at the start of the game (with enemies spawning in your back and ahead of you like crazy) and get the ending

Thats what I want to know

Where is the link?
I can’s see the link.
Post the link