Hey, I don’t think I’ve ever seen this question. What is your favorite game? Not just here, just any of the game you’ve played. I really don’t think I have one.

I’ve been having fun on No Man’s Sky recently, it’s really changed a lot since launch. And there was a new update today. But I don’t think its my favorite game or anything. I think I spent a lot of my childhood playing Ratchet and Clank.

my contenders are tf2, megaman 2, heroes 3 and blood

tf2 is the game I have by far the most hours in (4,224). I don’t think it’s my favorite though, because of how much my enjoyment is based on the people I play with (it’s not fun to play against people that keep walking into walls)

megaman 2 is the first game that I really liked and I was considering learning to play it without taking damage (the quickman fight made me give up even though I did manage it to do it). anyone that says that 3 is better is wrong because the weapon weaknesses in 2 is way more interesting. since there are some weapons that just destroys some bosses (metal blade against metal man is the best thing ever) and most bosses have more than just the one weakness

heroes 3 is really good and I always think that I should play more of but it takes so long to play a game. I do have a rule though that whenever I get a new computer it is the first game that I play on it just cause I find it funny to get a new computer capable of playing the newest things and going back to a game released in 2000

blood is the best of the build engine games and the best single player fps game I have ever played. I think it is my favorite of them all (it’s the only game I made a serious attempt on speedrunning). if it had some less “cheesable” enemies it would no doubt be my favorite. as it is now only 3 out of the 11 enemies (counting all cultists types as one) are fun to fight, I think the developers knew that considering how many cultist there are and how few of the others there are

For me, what constitutes a “favourite game” for me is a game that I would always be willing to play no matter how many times I’ve played it before. Currently the games that fit that bill for me:

I mean, all Civ games are like, infinitely replayable. And I don’t think I’ve played final fantasy, but Myst and RE are incredibly replayable. I guess like the most replayable game that exists is like…Minecraft.

I’ve spent too much time in tf2…way too much time. Megaman was fun as a kid, but now as I play as an adult I ask myself, if it was even as fun as I remember it. I don’t think I’ve played the Heroes series.

I don’t necessarily have a favorite game, but I have been playing a lot of Rimworld lately.

I think my favorite game right now is Noita, anyone else play it? Someone should get on a weight gain mod.

I’ve played so many games over the years that I don’t think I could pick an all time favourite.

I haven’t played many games at all over the past 18 months, but if I had to pick a current favourite, They are billions on Steam. Insanely hard, but utterly compulsive!

Mine has to be Chrono Trigger, Banjo-Kazooie/Tooie, Breath of Fire 2, Final Fantasy 6, and Donkey Kong 64.

Each for has that sense of adventure and exploration that makes playing them again always a treat (heck I even made game notebooks on each to note anything different of to get useful items.

Megaman was fun as a kid, but now as I play as an adult I ask myself, if it was even as fun as I remember it

I think that only 2 is good the rest are kind of meh (I don’t remember what I think about 9 and 10).

My favorite videogame is Halo 3, posibly a of shoters more dinamics that exist, reasons:

These are no all the games than i like me.
I will never say that all this games I like than halo 3 and I could create a orden list of game that I like more until the game that I like less. But I do no have time for this.

You…you went all out on this.

I’d already gotten into Dark Souls games and loved them and their approach to worldbuilding, but even when I saw the first trailer for it I knew I’d be into Bloodborne way more. It just hit so many things I love about fiction. I mean absurdly huge cities, werewolves, and cosmic horror all rolled into one? That’s like the dream setting I didn’t even know I wanted. Beyond the aesthetics and lore, the gameplay is pretty fun too, and I like the more fast-paced combat and the great sense of exploration and level design that reminded me of the best parts of the first Dark Souls.

Before that and still my second fave would have to be Bioshock. Really fun shooter that avoided a lot of the crummy gameplay mechanics most FPS games were falling into at the time and an amazing setting and story. Last third kinda fell flat in terms of the narrative, but the game was still fantastic enough to offset all that.

Favorite game’s always a tough question for me to answer, so I usually answer with multiple things:

Nostalgically, it’s Majora’s Mask- one of the first games I’ve ever played, and is what introduced me to what has effectively become my religion, that being the Zelda games.

Current favorite is definitely is the first Xenoblade Chronicles- one of the best games I own on my Switch, and I really wish I could’ve tried it sooner.

And my favorite upcoming is Monster Hunter Rise- I’ve sunk 25 hours into the demo and I still had lots of fun fighting the same two monsters over and over. Can’t wait for March!

Probably just Minecraft. I know, I know, it’s mostly seen as childish, but it’s been a giant favourite ever since it came out. There’s a lot of close seconds and thirds though, such as Terraria, Starbound, Wizard101, etc.

I like to think of myself as a rather well rounded (Ha) person when it comes to my favorite games, as I play pretty much every genre.
I do have my favorites though, and RPG’s are probably my tippy top fave genre.

My favorite game has swip swapped over the years, and probably still will in the future, but for now my favorite is probably Bloodborne.

There’s just so much replayability in that game, and with the chalice dungeons, it’s pretty much unlimited. The versatility between builds is better than any game I’ve personally played, and pretty much everything in the game can work as long as you know what you’re doing. You can even beat the final boss with the starting setup.

Aside from that, I’ve gotta mention the SMT games for being the most rewardingly punishing games ever, and for each individual game just oozing their own unique style.
And Kirby for just pure wholesome fun (and also eldritch horror, but let’s not talk about that.)

System Shock 2
I’d say it’s the best game you’ve never played, but everyone’s played it a million times without ever realizing it. 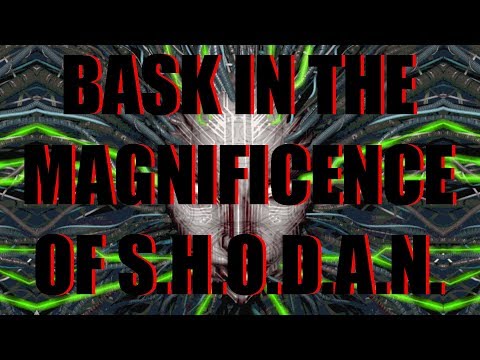