I decided to start working on a set of extra quests for the Muffin Top questline. I have no idea if I am going to release a completed version of the mod anytime soon, however. I may just forget about it in a week. Either way, I started around a day ago out of boredom and got fairly far into it. Here is the current plan so far, as well as how far I’ve completed each concept.

· Adding a way to farm calories for Vicky (Completed, may be refined)
· Option to weigh and measure Vicky after a certain point in the questline (Completed)
· New descriptions inside Muffin Top based on Vicky’s body fat percent (Refining)
· New sprites for Vicky based on her body fat percent, replacing the old ones (Completed)
· New recepie quest to be placed between eclairs and pancakes (Testing Phase)
· Job at Muffin Top
· Augmented Vicky weight curve that allows for a longer questline (Concepted, will likely be added)
· New Vicky sprites to add more progression to her gain (Concepted, partly implemented)
· Task to feed Vicky, rather than requiring you to go to Muffin Top (Concepted, may not be able to be implemented)

Some way to progress the eclair quest through Vicky and not the Sex Cafe would be nice.

Man, it’s been awhile since I’ve played this game lol, I think I’ll have to get back into it to check out this mod

Originally the Cafe is where you have to memorize the recipes right? So instead maybe we could help her experiment with recipes or something.

As for OP, what about items like new foods, maybe some with special effects?

Sorry about the delay on the update. I took a small break, since I did a huge chunk of the mod in the first two days.

I found going through the cafe a bit odd too, but I also don’t want to lock people out of doing that, so I may make an alternative route based moreso on Vicky while still keeping the cafe route open.

I have an idea for an item and respective quest already, so developments on that’ll be started here soon. That being said, I’m thinking that I will only add one recepies in the main quest and scatter the rest around the sidequests, if at all. I feel like having more than 3 needed in a row may just make the whole thing a slog. That being said, if I feel like the amount of content isn’t apt before the full release, I’ll add one or two more.

I’ve never been able to figure out vickeys quest, anyone able to help with a guide?

Your mod sounds truly cool. Hope you’re able to develop it further in the future… I just finished a similar one, but it’s more of a “lite version/bootleg.” You can check it here for sprite ideas: Feedee Paradise mod v.1.4.10 (01-11-19) - #3 by WingedSpider

I’ve decided I’m just going to use to Kisekae and GIMP to make the sprites for Vicky, as to keep with the original feel of the game. That being said, your mod looks neat, albeit I haven’t tried it out yet in full. I wouldn’t really call it a bootleg.

There’s one written by someone else here,. It’s really long and complex.I usually just cheat my way to the current end when I want to test out the mod.

Here’s a sample of what I have so far. I may be able to make a partial release here soon, but it won’t have all the features I have planned so far. 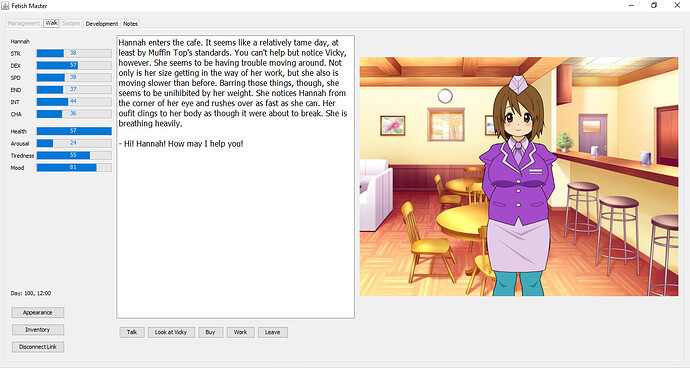 · Vicky’s weight can now has a can be farmed infinitely after the completion of a the last major quest. Eclairs will probably be the last quest, but more intermediate quests will be added. One quest is currently based around the calorie farming system.
· Muffin Top now has different descriptions depending on Vicky’s weight
· A Vicky sprite between 4 and 5 was added, sprites 4 and 5 were slightly reworked, and sprite 6 was completely overhauled. Spite 7 is currently still unused
· A job system with weight gain elements is implemented using placeholder images
· You can weigh Vicky after the completion of the entire questline, but doing so may be reworked, as it is a bit awkward to do.
· Quests and items planned to the point of near-completion, but need to be added to the game itself
· Lore will be added to Vicky’s backstory, using character(s) already present in the game, as well as the possibility of new ones.
· Increasing Vicky’s weight outside of the walk system seemingly impossible, but I am not the best at working my way about the modding interface, so we’ll see

I may have a partial build by this time next week, but I am doing this mostly in leisure when I’m bored, so we’ll see what I get done.

New:
· Slight adjustments inside Muffin Top (E.G: Buying has been moved to a separate menu)
· Partial quest added after the completion of the first quest. The quest itself is unfinished- as it is planned to be quite long- but it is also cut off early, as to preserve the rest of the quest for the next update

*Requires the completion of the original questline to access, up to the second Vicky’s Needs check. An alternative route is planned, and will progressively be added. A save that is already to that point will be provided shortly, if desired.

Notes:
· The current state of the mod includes several small errors. I don’t have the best eyes, so I certainly missed a few during my test run. I will make an attempt to weed as many of these out as possible as I update further
· The current focus is expanding the current plotline up until the bulk of the content, followed by a minor overhaul of the eclair quest

If anything does not work, tell me. I streamlined the mod by removing all my debugging events, but may’ve accidentally deleted something important that I missed during my test run. It’s unlikely, but it’s notable enough.

That post you linked was taking down, I just started playing the game again. How do you cheat though it?

If you’re in the developer mode, you can go from the base to the debug menu, then go to “Progress Story.” It doesn’t skip all of Vicky’s quest, or any of it, for that matter, but Vicky’s quest is integrated into one or two other questlines that do get skipped. That being said, I can just give you a save at the current threshold. Honestly, I forgot to do it.

Also, the link is still up for me. Are you sure it’s down?

The link doesn’t work for me either, so it does seem that the guide’s down.

It isn’t, it’s just that the link isn’t directing to the proper part of the site for some reason. Try this.