so i was wondering, as a noob internet forum user such as myself, if theres already a finished project topic or something of the likes of a forum which has the sole mission of archiving all the finished projects, with their respective links and short 3 lines discription, to help those eager to play said games reach them, any thoughts on the matter? i personally think it would be a neat idea to help sort things a little better. cheers!

I am pretty sure there isn’t something like that on the site, the closest thing being the “Unclaimed Projects” list, which provides a link to projects that don’t have their own topic on the site. It does sound like an interesting idea though.

I agree, it would be nice having a big master list of projects depending on whether their status is finished, ongoing or unknown rather than having to scroll through each section on the site. Could be cool to incorporate different categories of games too!

That’s actually a really great idea! I’d love to be able to see what games are fully complete, as playing half-finished demos just isn’t the same.

There are problems with this above system, as you can see the tags are not very well used, and depend on the devs to properly tag their posts. The badges are better but they are manually maintained by our staff and are labor intensive to maintain. It is also not always obvious to us what is in alpha, beta, or full release and we have many other things on top of moderating the site that makes this even harder.

Now there are a few things we can do.

The problem here is these fall into about the same traps as the above and some more (mainly the topic falling off the radar, see our unclaimed list topic). Also, the forums are more of a temporary dumping ground atm. We are currently working on a full website similar to itch.io that will hopefully fix (or at least relieve) these issues and more. Due to this we have chosen to not make such a list a high priority and instead work on the new site.

hey grot, is this the link to the tags? I don’t see full release under that page

When I click on your links in the post you made, it doesn’t show up for me, it is an empty page.

Its under the Release category but no one is using it right now. 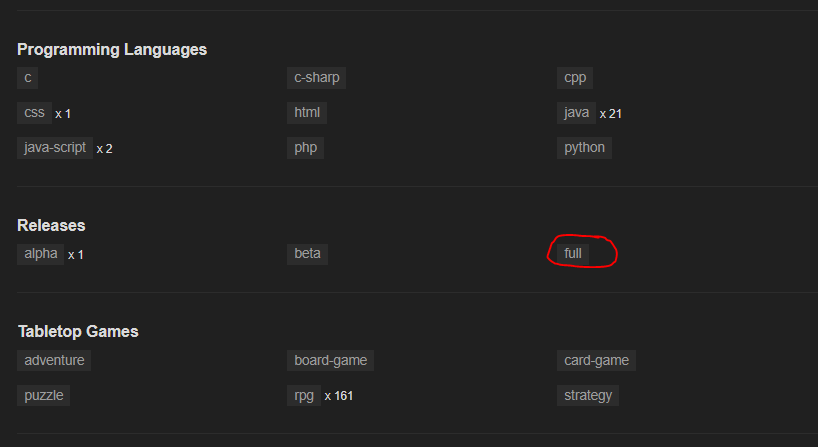 One issue that could be with using these tags is you have to mark the post as a release first to gain access to these tags.

I did this originally so users can search for all games with a release by looking for the release tag, but if its use is confusing it may be better to remove that restriction.

For some reason, we are not allowed to add “full” tag to the category for Game Jam submissions. (I can add it to JA just fine)

Maybe during your site tutorial you could also mention that in order to have your game show up under the full release tags, you have to add both “full” and “release” to the post.

Thats not a bad Idea. We will have to consider doing that when we have time.