Forks: A Weight Gain Visual Novel (Cancelled, all assets posted for everyone)

Cancelled due to life changes, but here are all the assets:

After way too much time and a lot of life’s wacky curveballs, the first significant update’s finally out!

Forks is a first-of-its-kind visual novel made with Ren’Py, which hopes to combine a familiar kink with high production values and a long-form narrative. Join Alex as she works to balance her wants, relationships, and responsibilities as she enters the wild world of adulthood.

Forks is and will always be a community-driven project, and so will not be tied to our team Patreon. This thread will be the best place for Forks news!

Please let us know either below or in a message to myself or @e123b if you experience any issues or if something is behaving strangely. There’s a lot going on under the hood and we may have missed something! 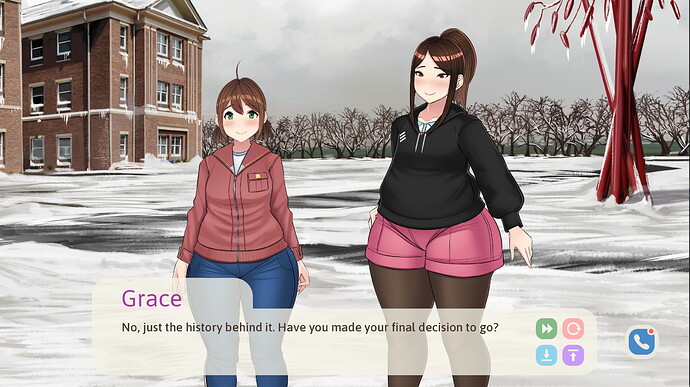 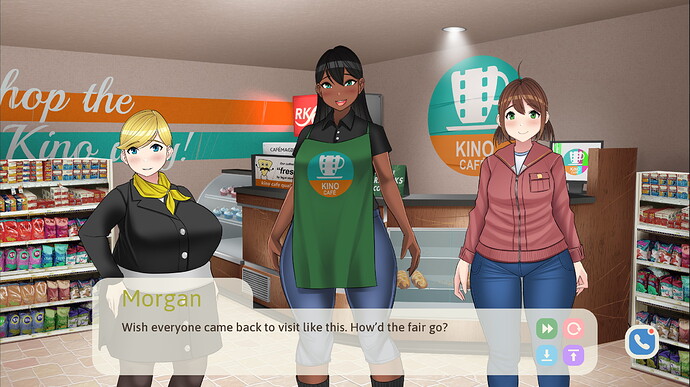 Forks: A Weight Gain Visual Novel (Cancelled, all assets posted for everyone) Projects

Here is a Guide, warning massive spoilers below! If someone would like for me to remove it just let me know!

I’m interested; always a fan of more VNs, and even medium-length stuff that indulges in WG content is pretty hard to find. The slow-burn aspect of it is kind of refreshing too. Decent sense of wit, and not too reliant on memes or inside references, either.

I haven’t been on bbw-chan in a while (didn’t even know it was in danger of shutting down), so I’m not familiar with the project at all. I’d like to see it continue past what’s there, but I’m guessing you’d need to find a new artist if it were to continue? The character sprites look like FoxFire’s work, and he kinda vanished a few months ago after getting a new job or something.

Welcome first of all! Loving what I played so far! The characters are interesting, the story is sweet too! Everything is made to a very high standard too, left me craving for more! especially since its hard to find weight gain themed visual novels (especially ones of this quality!) So would defiantly like to see the project continued, especially since the groundwork is already underway (sometimes the hardest part!).
As @jimbobvii mentioned, the art seems to be foxfire’s talents, so not sure whats happening there, if your plan was to go onto a commercial project you could always turn this one into such? Especially with a current demo it would be easier to get people to support!

I look forward to your teams work! What you’ve managed to achieve is brill! ^^

I’m absolutely interested in more! This has tons of promise and is something that I definitely would follow for updates.

Edit: And I’d gladly throw money at any sort of a finished product. Count on my support~

A great first cut. My only suggestion is to allow the player to choose which character to play at the beginning. I suspect the weight gain is influenced by their respective body shapes.

@Tron I can’t wait to play the game!!! And please don’t let the game fall by the wayside!!

Just played through it and I’ve got to say that both the writing and the artwork is stellar, and the music is quite nice too!

If the quality of the game holds up like the demo, it’s gonna be one of the great ones for sure. Best of luck to you and the team, I hope it’s a smooth ride until the eventual release!

liking the progress so far, can’t wait to see more, though I figured I’d have to ask, are you planning on giving updates? or waiting until the game is finished before showing more?

Just finished my first playthrough, and teaser is right. I NEED more! The artwork is fantastic, and I’m really digging Alex’s gradual gain as she progresses through the story. If this ever does manage to become a complete game, it’ll be fantastic. Really looking forward to more, keep it up!

Thanks everyone! This has all been a long time coming, and I was worried I might’ve been forced to release this in too early a state. This whole thing started because I wanted to give something to the community, and I’m seriously glad that people are enjoying it.

@jimbobvii FoxFire did indeed do all the visuals, except the placeholder UI. Life’s made things much busier for us both, but if we release more Forks, he’ll still be the artist.

@madone Their gains are indeed influenced by their body shapes! Unfortunately, we only plan to have Alex be the protagonist, but she does have a story with everyone, and everyone has the option of gaining with her.

@avakann I plan for updates, but I want to wait until each can be a solid chunk of content and improvements that makes it all worth another playthrough. My freetime’s been crunched, and I don’t want to tease content that isn’t immediately playable. My biggest fear was promising that Forks would be this and that and awesome when it was still just in its conceptual stages, then never delivering anything playable.

Looking good so far. Ran through all the current intro achievements except “outsider” (couldn’t find that one). I would play more of this if it were available.

Yeah, 5+ gaining stages is a good idea, since you can always add on to the story to add even more gaining stages and sizes, for those who love massive weight gaining and stuff.

This is delightful! I love how the characters feel like real people with real concerns. It would be wonderful to see this made into a full game.

I’ve worked on ren’py games before and played quite a few over the years and the engine really carries a lot of issues with it when trying to make an engaging game. I like the overall visual style but there’s some areas of design that could make it a lot more enjoyable. Take it with a grain of salt; you might have some of these things in mind already and it is just a demo.

If there’s a jump of a couple of days in the story, a calendar system or some other visual cue would also help the reader keep track.

There’s other more advanced stuff that’d be cool to see but totally unnecessary for a good game. For example, there’s the animation systems built-in to ren’py ( eg: [Tutorial] Animation and Transforms by Example - Lemma Soft Forums ) or its ability to use movies as sprites, allowing for pre-rendered animations. A lot of the engine’s features never get used, for better or worse.

My only other real suggestion has kinda been alluded to a lot here; I feel like it’s really word-heavy for a visual novel. Another edit pass to trim those longer scenes is probably a good idea. In general, I find that a lot of small scenes is far more enjoyable than scrolling through monologues- I ended up skipping dialogue a lot and that’s probably a bad sign, even with my limited attention span.

For all that, I’m still keen to see what you come up with - it’s got a lot of potential. Even if Alex looks a little bigger than I’d expect for her weight (unless she’s super short lol), but you have certainly still left a lot of room for growth. xD

I really like this game so far, My biggest concern though is that each romance/non romantic path stays mostly the same I’ve seen it too often in VN type of games and would like some sort of difference due to who you hang out and what the others characters would do while you were with etc etc

The writing and the artwork are great.
you’ve made the main character feel like a real person, and again the art is quality.

I love the gradual gain, and I can’t wait to see how far she can go. Or all the FUN little things that can happen, like a visit from the parents.

This game is fantastic. I can’t wait to see more. You’ve already gotten some great feedback, but I’d say not to let that slow you down too much continuing with the story.

Also, please do make a patreon. I’d love to contribute.

Just played through it, with more work this can be a great game. Really hoping this turns out something great

This is excellent work so far! there is so much potential with this and I hope you can finish it someday.