What happens if all three winners refuse to accept the reward?

In the event 2nd and/or 3rd place can not or will not accept the cash prize their respective portion of the winnings will be returned to Weight Gaming.

So you’re saying if all three winners refuse to accept the reward, all the winnings will be returned to Weight Gaming?

That is what the established rules say.

We’ve made it clear up front that the winnings will delivered via paypal.

And just to be clear, its not like we’re pocketing the money. In the HIGHLY UNLIKELY EVENT that this happens, the money would be put back into the account to be used for later site expenses or future events.

First time poster here. Thanks for making this game jam event I think its going to provide the motivation I need to finally materialize ideas I’ve only had on paper.

That being said I have two questions about scoring.

Game design: if we were to simply make a text based game with some variables like in the quest engine how might one expect for game novelty to be scored, or will the score depend and vary on the novelty of the puzzles themselves?

Art assets: How might the implementation of stock art be judged? Stock art midly edited? Or just random art we find and use but which we haven’t created? What if we get permission from the artist? Does original art get preference in judging?

So I will start with Art Assets first since that is the simpler one. Not every judge will judge it the same way but in general what I look for for when judging art assets myself.

Now keep in mind each judge will score this differently and this is just what I look for. When it comes to using stock assets for me it depends on how it is used. If they are obviously just thrown in bc you need them then you wont see many points from me. But if I can see you used them as something to build off of and transformed them you will get more points. In general though original art will most likely get more points from me due to the extra effort that has to be put in to make them and that needs to be accounted for. I wouldn’t worry to much on it though since the majority of points are in the game design.

Now onto the game design this is a bit grayer. This is mainly because of how broad it is. Over all I judge the basics based on if the game feels like it was well thought out/planned, took advantage of the strengths of its genre, how well it used the imposed theme/restrictions, how ambitious was the concept, ect. To relate this to your question of a text based game I would probably be asking questions like where there branching paths or was it one fixed path, where there any good puzzles, did the choices really matter or did they effectively give the illusion of choice, and how did they use the theme.

While that is just the basics I usually give more points to games that are subversive in some way or do something novel with the overall design. Now keep in mind I said overall design. This means if you have one thing you use in your game that makes me go wow and you never use it again you wont get much points from me. It needs to be ingrained into your games overall design/structure and not something through away.

I hope this answered your questions a bit.

Thanks for taking the time to respond with so much thought. I was initially concerned about the limitations of a text based genre but considering how things are weighed and what judges may expect from any particular genre I can with greater confidence move towards action rather than stifling my thought. After all that’s why I want to partake!

All entries must be submitted as a standalone game. We should not need access to the engine the game was built on to run it and mods are not accepted entries.

Does this rule also apply to Java based applications?

technically you would be required to download Java to run a java app.

assuming you don’t have to download anything else will you consider that a standalone app?

I see no reason why java should be dis allowed. You would be well in the clear.

Yep @Juxtaterrestrial is right. Java applications are ok since it can be reasonably assumed the user has java and if not java is freely available and easy to install.

I can’t seem to create a topic even though I have a badge saying I am at TL1. This isn’t urgent as my game is not at a state I would feel comfortable submitting on time to the fat fornite competition regardless. But for future use what am I not getting here?

That is odd, you do have TL1 privileges. 1st I would try to post a new topic again to make sure it was not just a small hiccup on our system and make sure it is done under this category:

If that fails could you provide us some more information? If you end up running up against the time limit we can make a topic for you and assign you as the creator so you can edit it if needed.

It works today now, not sure what changed.

You are not the only one who had this issue. Seems to be a small glitch. Not sure what is causing it yet though.

I’m realizing now that this is all stuff I probably should have brought up beforehand, but seeing how the categories affected the scores made me think a little harder about the current scoring system. I feel like you get an automatic advantage if you’re making and rpg or visual novel, since those game types rely heavily on writing and dialog. I’m not %100 sure what would be better, maybe rolling the visual art aspect and writing into one category with less total points? Right now writing is nearly twice as important as the actual mechanics of the game, and art is literally twice as important. It just feels kind of weird to me that with this scoring sheet just having any art and writing at all is probably better for your score than having flawless game mechanics. Honestly mechanics seems low in comparison to a lot of the categories. Innovation is way more important than the game mechanics, and even more so when you consider that game concept and innovation are basically the same category. I dunno, I’m definitely a little biased but I’d like to see more emphasis on the “game” in the next game jam. 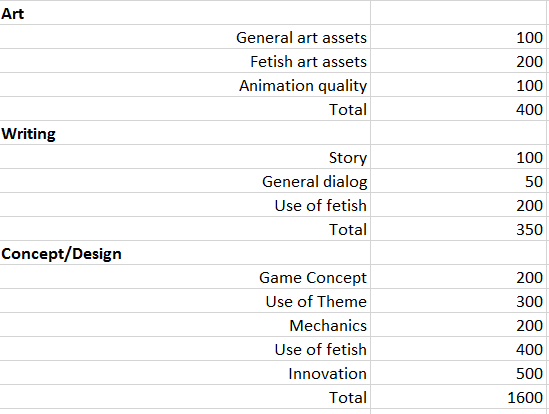 I’m not really sure what aspect you’re looking at. I’ve included the breakdown of the scores, and the Concept/Design is worth over twice what writing and art are combined. I’m actually pretty happy with how the scoring is setup currently. If someone put a lot of effort into the art/writing, they get a leg up and I feel that that is completely fair, but an overwhelmingly good game in terms of concept/design will still win out. Our one visual novel lost out largely due to other games having more fleshed out designs.