Hi there! After a long time lurking, I finally decided that I want to try and make something - even if just to try and reinvigorate my quickly-deteriorating skills in CSS/HTML/JavaScript. It’s been long enough since I’ve used any of them that I’m finding out a lot about how little I still remember from schooling. So, considering how much I paid to be taught those skills, I figure a refresher is in order.

I’m working in Twine, since my interest is primarily in getting some working practice in with the skills I already have some experience in, and the core game-loop is based around something I figure will be of actual use to ME even if the whole game doesn’t get finished. (I’m basically trying to give myself the greatest possible chance of getting something useful out of this so as to stay invested despite the fact that I absolutely KNOW this is going to be an often-frustrating experience.) In short, as far as mechanics goes I’m building a habit-tracker akin to ChoreWars or Habitica - basically something that you input having done household or self-care actions into in order to unlock in-game rewards. Do chores, get tokens; spend tokens to interact with the game world in order to win over NPCs and do things with/to them.

That’s the quick-and-dirty abstract, but the issue is… I have experience in writing and programming, and little-to-nothing on the art side of things. But this is also a “zero budget, work on it slowly over time for personal growth” project, so I can’t justify dropping money on hiring an artist either. I’ve been fiddling with Kisekae 2 whenever I started other (often-quickly-abandoned) projects, but I’ve never been quite in love with the results - I can simulate certain types of body change via messing with the slider values and pushing them past the default limits via save/load abuse, but even then there are strict limits about what you can actually do. The characters are always facing strictly forwards, and the costuming options are mostly limited to modern-anime (which means the only settings available to put your game in are adjacent to modern-anime if you’re using Kisekae figures as visuals). It’s presumably feasible to draw custom additions for both bodies and costuming, but… that adds yet another thing-to-do onto the list, which I’m trying to avoid in order to keep the scope of this thing within the range of “reasonable to expect to complete.”

I’m going to keep hammering away at the coding and mechanics of the habit-tracker first, since those have to exist in order to tie a game to them in any fashion, but are there any other sources for 2D character designers out there? I can do a limited amount of fiddling to anything as far as output, since I plan on using 16-bit style visuals to make things easier on me as far as GUI/iconography and so all character designs will be modified/simplified into pixel-style figures to match, but I don’t have the artistic skill to manage much work from scratch.

Thanks so much for reading!

It occurs to me that I should offer something in return for my ask, so… since I already mentioned that I’ve experimented with how to make weight gain/expansion work in Kisekae, I might as well show my work. 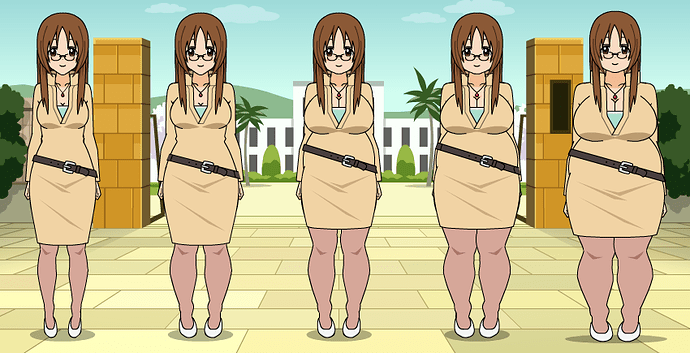 This is where I’m able to get to with Kisekae’s native setup, using a lot of little tweaks. The left is a base character, the right is the largest I can get without the model breaking or resorting to other programs to manipulate the image further.

Kisekae has a lot of sliders, and the second from the left is what happens if you just max all the weight-related-change ones out. As you can tell, while it might make the character a little “thicker” it doesn’t actually resemble a “weighty” person in any way.

The middle character is what happens when you start messing with the other settings: change face shape to be softer, use the “pregnancy” bellies (sadly there are only two torso shapes that are in any way rounded - the others just exaggerate or de-emphasize the default anime “hourglass” shape), go to a larger chest size, and adjust clothing to make it seem smaller & slightly ill-fitting.

To make figure four (second from right) happen, you have to start messing with the import/export tools. When you export in Kisekae, it spits out a chain of variables that you can copy/paste and will generate the same figure whenever you import the same variable chain. The sliders in-program only allow you to max out most appropriate variables at 100, but if you set them to a recognizable value shared by nothing else (I use “42,” but whatever works which you can pick out of the string) you can alter the value in the variable directly and thus reimport values greater than the in-program cap. This allows for much larger sizes, but you can already tell just from looking here that the model is starting to break at only a tad over 100. You can go bigger, but if you do you’ll need to fix the final result yourself in another program to make it look… well, human.

The last image, on the far right, is my current theoretical maximum which looks okay for use. At this point, since I can’t make the variables any bigger I have to directly manipulate the model size as a whole. The program scales the model based on how “close to the screen” it is, so by zooming it towards the “camera” it makes it a bit larger. Then you can fix positioning via making the character hover off the ground with another positioning slider, and correct for the missing shadow by adding a second character (in this case, the character from slot 8 - 2, 4, and 6 are disabled) and adjusting their position to have them float ABOVE the character you want to have a shadow. At this point, you adjust the head size to match your original base characters via the sizing sliders. I’ll be honest, I’m not sure if this is even worth doing - the comparative size versus the prior model may not be significant enough to be worth the work - but I wanted to test and see what the biggest I could actually manage in the program is. It’s this. Any larger and stuff starts to break.

In any case, I’m still hoping someone has other 2D options they’ve found around. I’ve been doing a good bit of diving into Google, but aside from picrew (which is HARD to find multi-size model links for - if it’s plus-size, it’s one plus-size option) there’s mostly only 3D modeling programs. Anyways, hope this helps somebody in a similar predicament!