Greed, Gluttony, and everything IMPbetween

This is my entry to the Gain Jam game jam! It’s about using imps to forward your own greed and gluttony!

Greed, Gluttony, and Everything IMPbetween by James "Kanto" Burton

An idle game of IMProbable luck!

It implements both the theme and all wildcards, where you have multiple resources you manage and gather to fuel your progress, you have a board of imp minions to do your bidding, they need to fail their duties in order to improve and rank up, and prestiging starts a new game where you spend souls collected from the last run to improve your next run!

NOTE: It has a windows executable, though I haven’t set up the new VM so I apologies to my Linux users. But on the plus side you can still play it in the browser

NOTE2: Before the deadline I’ll be continuously updating the game at random intervals as I make progress. Hopefully I can finish all the needed art and finalize some much needed polish for the game!

EDIT: In regards to Note 2, I have given what polish that I could and made what lil art I could. Though I do hope that the game is running with little to no hiccups.

A bit more explanation of the UI would be helpful… on the other hand, I do like how there’s a bit of Cultist Simulator in trying to figure out what resources and mechanics are used for.

Still feeling it out at the moment, but it does seem interesting!

Edit: Perhaps I just need to get further for another option to open up, but when you reach the point of farming brimstone for revivals of high tier imps, there ends up being rather a lot of click-spam required… a repetition-click option might help, or just a choice to ‘repeat until revive’ or even ‘repeat until revive costs brimstone’.

a short tutorial screen maybe be helpful, or at least a “How to Play”

I thought I had the game totally figured out once I got to the point I was summoning and dismissing imps for brimstone but ??? 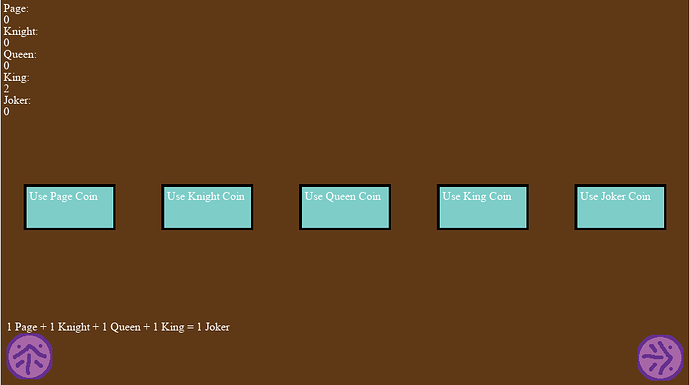 I also still don’t really know what crowns or artifacts do.

I thought I had ‘finished’ what was there (multiple max rank imps, enough soul upgrades so it was trivial to be sitting at huge piles of brimstone and cash, small piles of artifacts, and a decent pile of crowns if no way to spend them) and never encountered that screen, hah.

I’ve figured out that you earn these coins by dismissing size 11, 12, 13, and 14 imps for the coins (presumably for Page, Knight, Queen, and King respectively). But what they do is a mystery. Will try to earn a Joker.

Though sheesh some kind of way to forcefully fail duties or otherwise sizeup imps that isn’t spam clicking till failure would be nice.

EDIT: Whoops spoke too soon. I assumed I had it because size 11 gave me Page and 14 gave me King, but got nothing for 12. So I am stumped. I DID get Queen as expected for 13 though, so I assume there’s some glitchy business at play there

im gonna hold off on playing this for now

I’ve been busy trying to update the game for this last leg of the jam and I do not blame anyone for holding off until deadline day. I plan to do my best to get it into a mostly bug free and informal state. I am just one tiny developer that gets bullied by work and school, do the polish is going to have glaring rough spots. I have plans to add some form of info menu as I may not get to implementing information panels.

As for the mysterious crowns and artifacts; crowns increase gold income by a small percent but add up quickly; artifacts give various bonuses, here is what each does so far since I haven’t added their info in game yet:

Thank you to those who’ve given the game a try and responded back to me, catching these faults now will only help strengthen my game :3

Saying this right now, this is one of those games that I’ll definitely be playing for a good while. Idle games like these are rare and far between and this one is high potential, even going so far as to being usable on phones.

I like the idea behind this game but I feel the game could use serious refinement. I would swap the “click repeatedly for small incremental task” with “click once and wait for big task to be completed” because as it is now the game is giving me late stage carpal tunnel. I would look at Lobotomy Corp and Cultist Simulator for gameplay inspiration. Maybe have 4 different tasks on different objects according to 4 different imp stats like Lob Corp, or have it so tasks need to complement each other to complete some bigger more meta task like Cultist Sim.

Oh, I don’t think I mentioned anywhere that this is mobile friendly so you can play it from your phone’s browser

Game was fun to figure out how to optimize, though i agree with the maybe-too-many-clicks thing… I decided to try and count how many clicks it took to bring an imp of Crowns all the way from tier 1 to 14, and though i misjudged the brimstone cost and had to do the last ~150 in a separate chunk, the end result was absolutely in the mid-900s, if not cracking 1000. Grails may have influenced that number a bit, but even if they did i barely had any if any.

One thing i found seemed extremely efficient on the path to hitting economical equilibrium, but also felt exploitative; Even the initial starting trio of imps seemed to be worth a fair chunk of souls when left untouched. By the time i’d tried interacting with the system, they started at 10-11 and only got worth more as i bought more starting imps. If a full gamestate reset existed, i suspect it wouldn’t take long to hit the breaking points of positive net gold from duties and high-5-digit brimstone cashouts using this.

Okay, so if you played the game before this last push, here is what you need to know:

Here’s to the game’s chances of being a worthwhile game to play now and after the jam!

So, huge problem with this game: I intended on playing other games tonight and this ate 2-3 hours like nothing.

In all seriousness, you’ve got the Idle-Clicker formula down to a beautiful addicting science. It’s like an onion, every time you think you understand what the game is, boom, there’s another layer to it. On top of that? Each layer shifts the entire game’s meta expansively. First you’re struggling to get coin income and spending several runs feverishly dismissing imps of all kinds to get cheap revivals. Then money stops being an object and suddenly Brimstone generation is staring you right in the face. Then it becomes “man I sure am clicking a LOT” and there’s Auto Rank there for you. And multiplying all that? Those artifacts which make those tiny gains exponentially larger. Then you remember “oh yeah, there’s a player avatar here, how big can we make them?” to finish all that off. It WORKS REALLY WELL.

However, since 90% of the game is clicking, an auto-click option either needs to be brought in outside, or necessary to save the fingers of people in end game. I really shouldn’t have been clicking so much but… Well, it worked as it meant to. Excellent job.

I decided to write a devlog post over on itchio about some of the cut mechanics. Note: I only talked about mechanics I originally planned for the game, but new mechanics could be added to elaborate or improve current ones. (Such as clicking, as I never realized how click-intensive it would turn out to be, even with some last minute improvements 0_0 ) 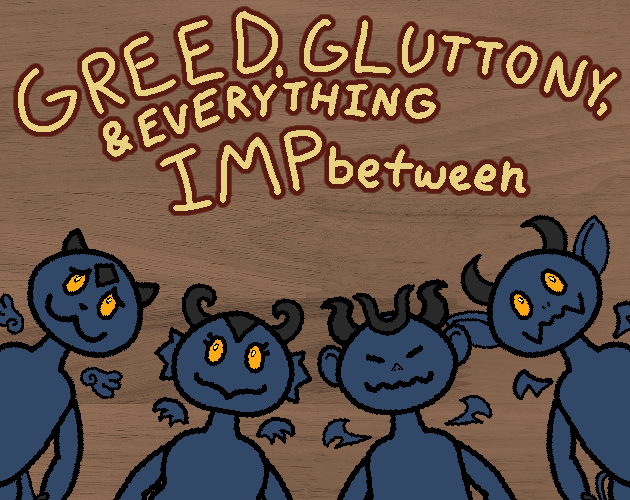 Hello everyone! What a wild 2 weeks it's been for me during WeightGaming's Gain Jam! Making an idle-eque game whilst combating the start of the school year at university, working at my job to stay ali...

I have a question to all who have played the latest version, and this comes from watching Impossiblesnail’s stream from Monday: 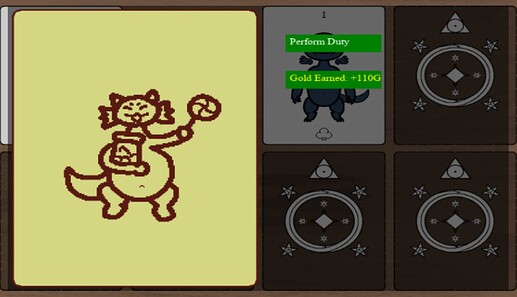 After reaching this screen from pressing “Perform Duty”, what do usually press next?

Likewise, sometimes I stopped to click away so I assured that imp would stay alive to passively gain gold while I went and did something else.

I ended up setting up an autoclick utility and turning it on while mousing over the button, as that’d spam through duties and revives. If I had enough gold coming then I’d just keep an eye until I got close to rank 7 to avoid accidentally burning brimstone if I wanted to harvest brimstone.

For real, the best way to play the game is just mashing the perform duty button until they’re dead and you can’t afford to revive them, then sacrificing them, buying a new one and repeating, I don’t even bother checking what type of imp they are or anything.
I’m still not entirely sure what else I’m supposed to do, especially after you start getting more brimstone than what it costs to get a new one, just endlessly raising and killing them over and over.