Hello all. I figured since in the coming months I will be formally creating projects on here that it would be productive to introduce myself and formally step out of the shadows of lurkdom, and step into the light of… hopefully people not making fun of me.

I am The Stranger, a (hopefully) future indie dev who hopes to use the mediums of writing and video games to tell super stories, build wonderful worlds, and write compelling characters. (I also am an abuser of amaranthine alliteration. Apologies.)

I am a Minecraft server owner with over 7 years of experience. I am not very proficient with most visual art digital or otherwise but I would consider myself to know my way around Blockbench well enough, and know some of the basic tenets of pixel art, and thusly I am also capable of designing textures that fit Minecraft’s new style well enough, but as the pixel count of the texture rises my confidence lowers.

I am a big fan of Bethesda Game Studios games such as The Elder Scrolls series, The Fallout series, and (hopefully) Starfield, and have/will (in Starfield’s case) create little mods privately for some of the newer games to suit my purposes. I might post some publicly if I can get it to my impossibly high standards (I also don’t use WeightMorphs at the moment so some people might have a problem with that.)

I am also a big fan of both Undertale and Deltarune. I consider them to be some of my biggest inspirations. I also know my way around the UndertaleModTool.

I am an amateur composer, making original music for my assorted projects, as well as derivative music (mostly Undertale related stuff).

To tell the truth I’m actually mustering up a lot of courage to post this. I’m quite an anxiety ridden person so it actually takes a lot to convince myself the world won’t explode if I post this, but I think it needs to be done.

tldr:
Hello. I am a storyteller, Minecraft server Owner and Developer, amateur composer, BGS and Paradox game modder, and an Asexual with a penchant for tig ol’ bummies. Let’s make something big together. (Pun intended.)

Welcome @The_Stranger. I would not worry too much about anything negative here. If you have been around our community enough, it should be pretty obvious that the community is a chill, positive, accepting one all are welcome. I wish you luck on your future projects or mods. I hope that the step forward will be looked back on positive for you

Welcome! That low-poly 3d modeling software looks incredible; I gotta give that a whirl. Got any examples of some projects you’ve completed using Blockbench?

I certainly have no problem with the mods people do/don’t use, but if you like modding Skyrim, you might enjoy combining the WeightMorphs + EVG Conditional Idles + Wildcat (or Cardio SE) mods. Those three together means a fat character has a tougher time in combat by having less stamina and moving more slowly. Your character typically ends a fight doubled over trying to catch their breath if they’re primarily melee

Welcome! That low-poly 3d modeling software looks incredible; I gotta give that a whirl. Got any examples of some projects you’ve completed using Blockbench?

This is a Hippo Cow from Avatar The Last Airbender/Legend of Korra for one project I was/kind of still am doing. It’s absolutely massive. Still needs some work, but most people have told me it looks neat.

This is a character from that very same project. Her hair needs a little bit of work now in my mind but I still think it was fine to show. 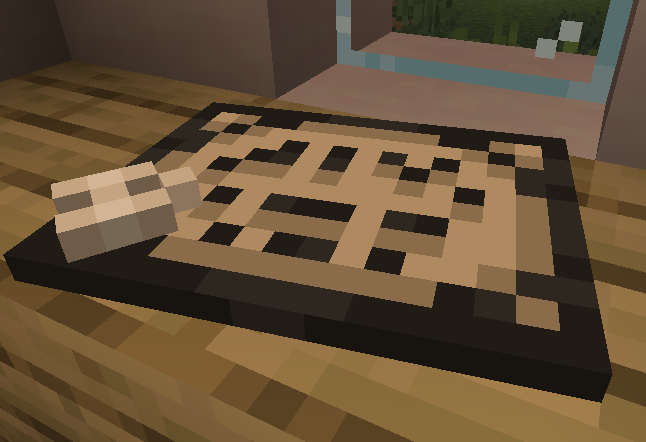 …and here’s an Ouija Board. (Actually an in game screenshot.)

It’s one of the most versatile, user friendly, and all around high quality free programs I’ve ever downloaded. The low-polyness of it in my humble opinion it makes it have a lower barrier to entry than something like Blender that very true to it’s name blended my mind the many times I’ve tried using it. You can export to all the usual formats (and probably more with it’s boat load of addons), but it’s main use that people use it for is making stuff for Minecraft since you can export directly to Minecraft’s json format and with some basic knowhow it’s basically plug and play. A bunch of server-side plugins have integrated addons for Blockbench that allow you to do what normally would be very complex things (namely completely animated custom entities) very simply, with it all being done only with a server-side plugin and resourcepack the player downloads upon joining the server. I know just by looking at screenshots that the other Minecraft guys also use it for good reason. There’s literally no other alternative when you’re working with Minecraft as much as I am. Despite me gushing about it’s uses for Minecraft, you can indeed use it for any other kind of low-poly 3d project you have, though I wouldn’t be able to tell you how convenient it is on that front.

I certainly have no problem with the mods people do/don’t use, but if you like modding Skyrim, you might enjoy combining the WeightMorphs + EVG Conditional Idles + Wildcat (or Cardio SE) mods. Those three together means a fat character has a tougher time in combat by having less stamina and moving more slowly. Your character typically ends a fight doubled over trying to catch their breath if they’re primarily melee

I’m already very familiar with all of these mods. I’m a BGS game maniac.

A screenshot of my Mod Organizer to show how many blades of grass I’ve touched in the past 2 decades.

. This is an example of one of things I said I might release publicly if it reaches my standards. The reason I don’t use WeightMorphs is that it’s more important to me to have the body, face, and a lot of animations be perfect at one size than actually have dynamic weight gain inside of the game, though I know that’s something a lot of people would want, so I don’t know if for Skyrim at least I’d release anything model related since it’s usually very much specifically tailored to me, but those animations and a tutorial on how to change some for iMmErSiOn’s sake might be what eventually comes out.

I just wish something like DAR would come out for Fallout 4 so that all the women in the game don’t walk with their arms out several feet to the side. Something similar to DAR came out for New Vegas but making/editing animations for New Vegas almost made my head explode so I can’t tell anybody how good that would be.

That’s some great work you have to show; made me download Blockbench just to mess around with. Looking forward to future content from you!