Just an idea right now, working on twine to make a pretty short story about this, but if anyone wants to make and actual semi-functional game, good on ya.

Subtle virus that is supposed to increase market inflation instead increases hunger signals. Part of its former purpose means it hides itself even from its creators.

Is it known if in CP2077 we’ll be able to change the thickness of our character even only slightly? I didn’t look at any gameplay, not even of the character creator, because I didn’t want any spoiler.

Probably, but they didn’t talk about it. They also really didn’t show the character creator.

We can only hope at this point

So far this is the best evidence we have that you can be heavier in Cyberpunk, a chubby NPC
https://amp.reddit.com/r/cyberpunkgame/comments/jbwm2d/dat_chicc_thicc/

But it might not even translate to character creation.

Yeah that’s very much possible, and honestly I’m going in expecting that we’ll be stuck as a skinny V

From what I’ve heard, the character customization will be big, so I’d be pretty surprised if they wouldn’t include the option to create heavier characters

A man can only dream… Personally I’ll be surprised if there will be a weight slider at all and at best it will have one like in Fallout 4/Saints Row: The Third (I don’t think I’ve ever seen a character creator that allowed you to create a fatter mc than Saints Row 2).

But who knows what mods might be able to do in the future!

Yeah kinda steamed about the lack of a butt slider, let alone the rest of the weak character creator. Like it’s petty but COME ON, they promised that! It was exactly as I feared, just a generic protagonist without much unique character creation options. Hell I know people have been hyped about the genital customization but that’s already been a feature in a lot of smaller games out there. Saint’s Row 3 has more options, I feel lied to honestly. Hopefully the rest of the game holds up

No chub slider I can understand barely.

No ass slider is a warcrime.

Well, I’m surprised. But not in a good way.
Who knows, maybe someone will be able to make this a reality?

Even despite there being quite a few fat people/characters, you cannot modify your own character’s weight. Not even like Skyrim where you can slightly tweak it, you straight up cannot change your character’s weight. At least let us have something even if it’s like 3-4 prefab bodies would be nice.

Its a real shame too, from what I can see, this has watchdogs levels of unfulfilled promises except no promises were made. It just is so barebones in the department of the open world that it feels just as disappointing.

If the sims 1 has you beat, you should not have bothered with the character creation at all.

Is it possible to mod in one of the fat NPCs bodies as V?

Mfw I realized that there’s no ‘fat’ option 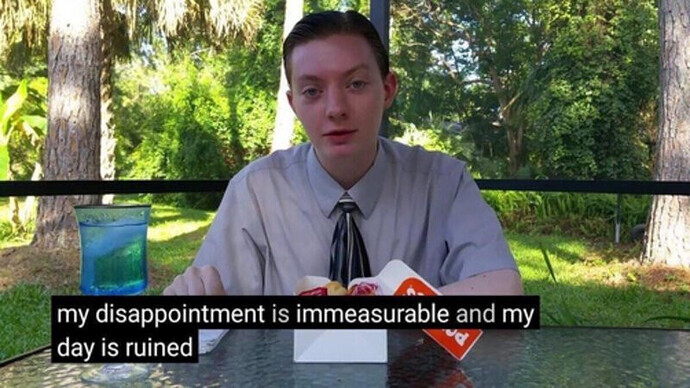 Thing is you would (depending on how you play) have to upsize clothing to fit that new size as well. Unless you can make a “cosmetic” slot or something similar you might have the outfits clipping through/interfering with the fat body