based of off Honey Combat, where you can date the various soldiers (out of the battlefield) as a male bee, you find love in a unexpected place, off the beaten path of a park

right now, its a very unsculpted idea, but here is what you can expect from this dating sim:

if you want to join the discord and make suggestions, you are encouraged to!
discord: Honey Dating (Unofficial fan game)
NOTE: this is not an official game, rather a fan game

I can’t believe you’re actually doing it, lol. All power to ya, man

wow, you should make it where the player has 1 health and gets destroyed if they do something wrong

im gonna be using a visual novel style, not an RPGMaker

A bit of trivia, if you feel like using it, male bees of the hive don’t actually do anything most of their lives, with only the female ones being workers. The males just sit around all day gorging on honey, until the queen bee wants to make a new generation, in which all the males are forced to fly with the queen, until all but one die.

In short, the male ones are the fat ones, not the females.

these are humanoid bees which I am assuming are evolved from bees and therefore more civilized, and the males work as hard as the females

Here’s hoping for a harem route, but will enjoy whatever!

there isnt gonna be one, it doesnt feel right for me to have a haram dude (I’m not religious)

Fair enough! While i disagree with that stance, it is your game.

and I thank you for respecting that fact

I know. I just thought a bit of trivia would be fun. You never know what random tidbit of information can stir up an idea. Either way, I just really like insectoids, so this is a thrill to see in the works.

Moved to project ideas and discussion 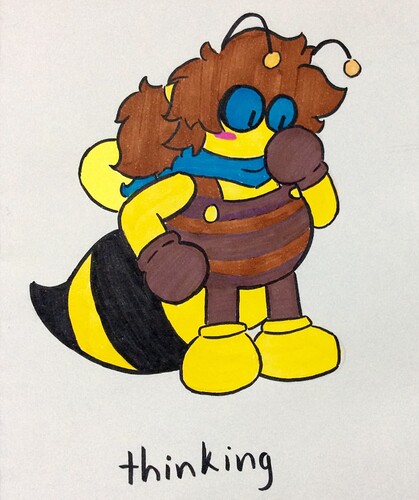 yes it is! And while I, unfortunately, work on it, but the torch has been passed down! I am exited to see where the new team will take the game

dont worry Brooks , we will revived the game , never let the torch fade away

where do I go to find the most current version of the game? There are like 8 different threads about the game on the forum but none of them seem to have a version more recent than october? (I’m probably just looking in the wrong spot…)