I was told that it might be a good idea to mention my project here so… here I am. I make chubby mods for video games and my current project is, as the title says, to make a complete chubbification of Aloy for Horizon Zero Dawn.

So far I’ve done four outfits but the plan is to mod all vanilla armors in game. With one I also tried pushing the boundary towards SSBBW, which seems to be what a lot of people want. For a better view you might want to check my twitter since I can only post one image. 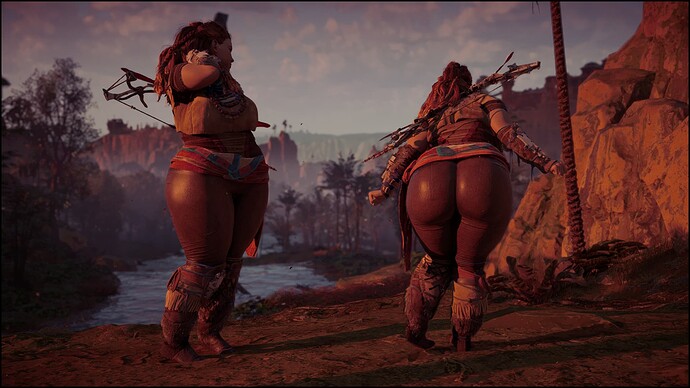 damn this looks good. Do you have a guide somewhere that you used on how to mod the game?
I am currently working on another project for another game in terms of ssbbw mods, but I may wanna try my luck with a more realistic character. (Currently modding risk of rain 2)

this is some pretty awesome work you’ve done here! I know not a lot of people are into this size, but its still really cool to see bodies that are larger than the norm in these games. I remember around the time HZ:D’s release people were getting their adult diapers in a twist about how fat and ugly aloy was AT HER VANILLA SIZE. So Im really glad to see her even bigger and cuter!!

now if only I could play the game myself…

Thank you. Pretty much everything you need can be found on Horizon Zero Dawn Modding discord.

I like to always aim for certain realism with my mods and I have this habit of using little details that I think really add to it. 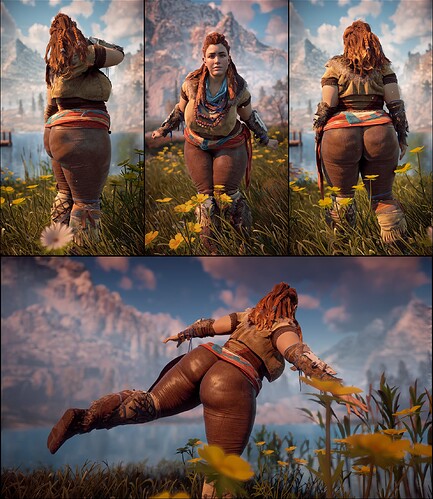 now THAT’S a reason to buy the game :o it looks wonderful, can’t wait!
PS: you said “I make chubby mods for video games” so I’d like to ask if it’s your first project? From how great is looks I’d like to know if you tried something else like that before. Btw. I’ve always dreamed of chubby / fat Cerys an Craite from Witcher 3 as there’s a quest in which she races Geralt but she’s so slow that to lose the player would have to do it on purpose.

These kinds of mods are the sort of thing that gets me to buy a game a second time on PC. Looking forward to picking this up later.

I’ve done various modding, 3D modeling and random photoshop wizardry on/off as a hobby since the 90’s so I do have some experience.

I only recently started releasing any of my work. My first publicly shared project was chubby bump maps for Honey Select 2 and this was part of the first that included 3D modeling.

Witched 3 would actually be an interesting project although some scenes might have some clipping issues with bigger models.

It all depends on what kind of modding tools there are for any specific game.

I get that, thanks! I’ve also been thinking about adding bbw / ssbbw models to squad-based games like XCOM 2. I’d be awesome to manage your own squad of fatties killing aliens for example but as far as I know, for this specific XCOM case, it’d be difficult because of armors / weapons presets. However this game has a modding tool and I’ve seen people adding “custom soldiers” from beyond the base game. But saying that, I was generally thinking about modern cRPGs / party-based games like divinity original sin 2 or upcoming baldur’s gate 3. The idea remains the same as in case of squad-based tactical games - a team of fatties for player to manage, customise, take action with.

I’m really impressed with how well the outfits are mapped to the character model! That’s some damn fine detailing you’ve got goin on here - great job on this!

Funny thing, someone just mentioned these exact same games on my twitter and patreon.

I do own Divinity OS 2 and XCom 2 and I’ll be looking into them at some point.

I’m a perfectionist which is both my blessing and a curse. I like to take my time to make sure everything is where it belongs but on the other hand I might fiddle with not so important details a bit too much.

Can you make the belly bigger, please? Would be beautiful

I feel like that exists already. At least whenever I see XCOM 2 in a sale, I think “I swear there’s a fat mod for that.”

I’m afraid there is not. I’ve been looking for one for quite a while