So I’ve been working on a side project and since it seems to have gathered some interest on my seeds of destiny thread, thought I’d make a new thread for this game. I know that this site focuses on weight gaining primarily so this may or may not be for you since the focus on this game is breast expansion/lactation. There is optional pregnancy and weight gain content as well.

I’m working on an expansion for a game called “Lacto Escape” made by Hutonts\Futon. Hutonts\Futon seems to have vanished from the internet leaving a lot of his work behind. Thought I’d expand his game a bit since it was fairly short. While the game isn’t weight gain based, thought I’d mention it if people wanted to give it a try.
(Update: I was able to get in contact with the original creator and got permission to continue to expand/develop the game

The game involves a woman who was transformed into a cowgirl and stuck in a tower. Due to her curse, as you play the game her bust will slowly grow, filling with milk. You have to find your way down to the bottom of the tower while milking yourself occasionally to reduce you bust size. Pregnancy and Weight gain have been added to the game but are completely optional. (Inflation is still in the works…)

This is stand alone game so you don’t have to have the original version to play it. 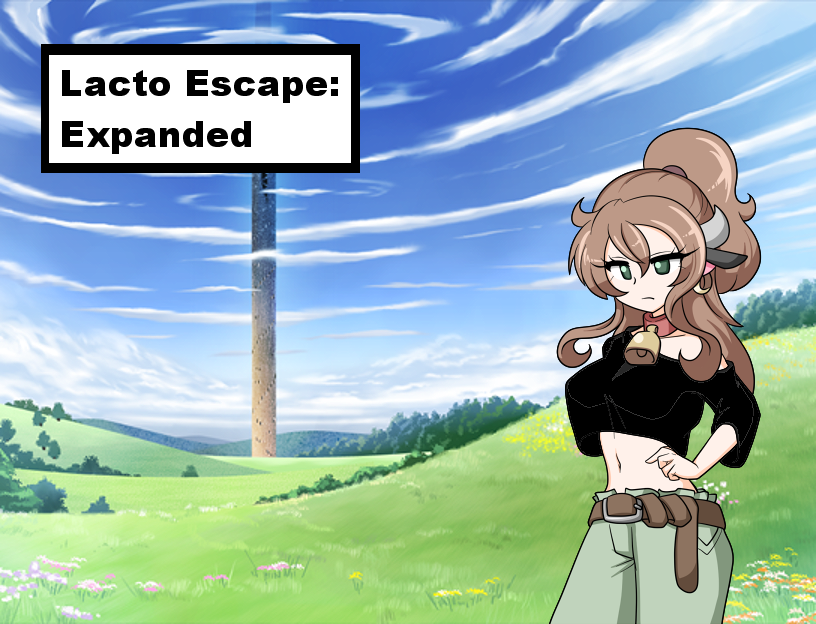 Note: This is an expansion to a game already made by Hutonts/Futon, just wanted to say that the game and art credit goes to him.
Art edits done to lacto’s character done by an artist named 912.
Also special thanks to Erronwolf for fixing grammar and editing dialogue for this game. 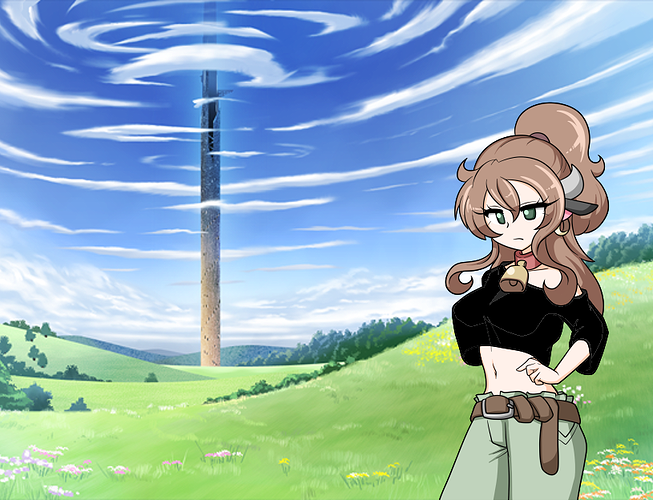 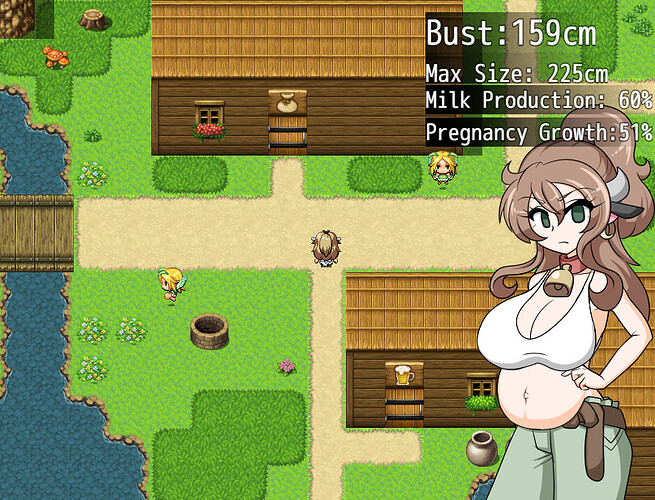 Current Build 1.20
Build Changes:
-Added in a ABS Combat System, there will be a reference in game but you press the 1 or A key to do a basic attack. Key mapping is planed in a future build.
-Added in a Pregnancy system. Once turned on your character will instantly become pregnant. You will slowly grow over time. Once you reach 100% growth, Labor will kick in. You will then have to find a bed quickly else you will give birth out in the field (Penalty in works) Once your character gives birth, your children will populate the newly implemented fairy village. Speak with your fairy children to receive gifts from time to time.
-Added a weight gain/stuffing system. You can find food scattered throughout the game, by eating said food you will become fuller. Allowing time for the food to digest will result in you body gaining xp to increase stomach capacity. Should you go over capacity, you will lose one level of stomach capacity.

-Added bras you can equip in game. Currently you can find three different types of bras, more planned to be implemented in time.
-Added four new floors to the tower each with their own puzzles. Also added one new rest floor as well.
-Added a portal in each rest area that gives the player access to the fairy village. The fairy village will give you access to several new buildings and npcs!

-Added fairy shopkeeper where you can sell your monster loot to gold as well as buy some adventuring goods.
-Added a cowgirl blacksmith who can take materials you find out in the world and craft weapons and bras for you.
-Added a hotspring where fairies and cowgirls can go to relax. (Note staying in the hotsprings for an extended period of time will result in increased milk production.)
-Added a Doctor who can offer you unique potions to increase/decrease your bust size as well as help reduce your milk production.
-Added a tavern where you can buy food supplies as well as manage/recruit companions to help you out when you explore the deep woods.

Just a heads up, I couldn’t get the Mac version working. I just get the error message, “the application ‘Game’ can’t be opened.”

Thanks, I’ll see what I can do. It’s hard for me to test since I dont have a mac.

It works for macs, you just have to disable the mac safety filter. In terminal type this: NOTE: This removes all gatekeeper restrictions. The app worked on my mac after I did this.

Forgot to add that there is another way to be a little more restrictive on macs is in systems preferences->security&privacy. But in Mojave on OS’s the universal opening option has been removed. This method only removes restrictions on identified developers recognized by Apple but don’t have the Apple developer license.

In that Privacy&Security window look for Allow apps downloaded from: (select your option)

Just wanted to mention, mac wise, I forgot to add in a plugin that helps out with saves. I’ll add it in sometime soonish.

Aye lad, nice job! Just wanted to let ya know that some of the books in the old endgame still have their old… well… that.
Anyway, the new levels are pretty nice, but ya forgot to add the skill that allows you to “empty the bags” (i got stuck in the hot springs room inbetween the two holes) and (the others are gonna hate me for reporting this exploit) when you drink you own milk the quantity doesn’t go down, allowing the player to drink an infinite amount of it.
One question though: you said that you may add the weight gain/pregnancy mechanics, could you make them something that you choose? Like, picking it or leaving it there? I’m not too much of a preggo fan myself, and i tought there may be other lads with my tastes (i hope i didn’t sound too “imperative”, english isn’t my first language so i tend to sound “threatening” from time to time, just look at my comment as a simple suggestion).

Thanks for the bug report, yeah I left the old room somewhat as it was but I may adjust it, the original game was a bit more lewder than the revamp I’m making. As for the weight gain and pregnancy thing, I plan to make it an option so for those who just want breast expansion only they can play without the belly expansion. As for the belly expansion themes, I haven’t decided on how I want to approach it. I think for now I may plan on it being attached to how much MP you have, with the idea similar to the fairies that the more magic you have, the larger your belly grows. As for the pregnancy aspect, I may not add it in since it would be difficult to work with that concept in this sort of game.

I would like you to add preggo things to the game, because y like those pregancy things

Hhmmm, you could put it as a second effect(?)
Instead of making it raise with your breast expansion you could make it raise with food.
Like, i dunno, placing one type of food on some floors (like you did with the gold) or making some traps about it, that make you gain weight, or make it gain when you drink your breastmilk.
You could also put it as a “encreased milk production factor”, since those would be, like, more nutrients for the milk(?)
Even if, thinking about it, that would be a lot of work to do for a single person, wouldn’t it?
Anyway I’m just dropping ideas, if that’s too much for you to handle don’t feel forced to do so, by far the game’s already good enough with it’s main mechanic (even if bigger boobs wouldn’t hurt IMO) and adding too much in it might be stressful for the player (and the developer making it).

Im always up for ideas, it will be bit since seeds of destiny is my main focus. I could look into a possible stuffing mechanic, maybe I might make it a choice on how you want belly expansion in game via options such as magic inflation, stuffing belly, or growing preg. The game is small enough I could look into it. 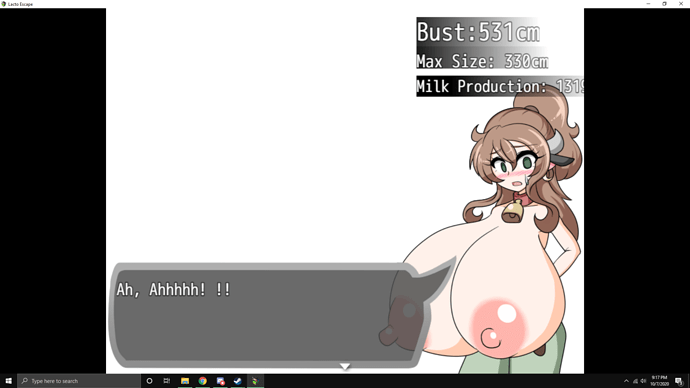 Just wanna say the game is really cute and fun, also i think the story and puzzles are solid and great. i found one bug: i can use the bottle milk endles. maybe you can let lacto produce more bottles of milk when she has bigger breasts, and you can feed fairys with her milk and get rewards from them. by that you have also some weight gain in it.

owhyea i forget to mention i you like breastexpansion you can try this game from the designer from vale city. the game i really like to. its about a girl who must defeat monster and get a gift from a wizard to store mana in her breasts to use magic.

I feel I have seen him somewhere recently, never knew he had a game though

edit after looking into it: he was hunted off by certain groups in pixiv and twitter early this year over what I assume if translations are right was over some TF content, so not really a “vanish” per say

Yeah, it seems like all of his profiles were taken down, otherwise I’d ask him first about the mod. I just thought for a great game, it was a shame it was so short. In any case, i’m still going to give him credit for making the game, just building upon what he made.

Haven’t gotten around to playing it yet, but I had heard great things about the original, so I have no doubts that this will be even better based on your other game. By the way, I agree that the belly stuff should be an option. That way if someone doesn’t like WG or stuffing, but does like preg, they could just toggle on the preg option and not toggle on the WG or stuffing options.

It’s an interesting demo, at least, and I’m interested in seeing how it grows. Some thoughts I had:

I might poke around at the images and scripts this weekend, maybe see how much of that I can do on my own or add a puzzle or two. If you’re interested in any of it, let me know and I’ll send my changes your way.