A little odd for sure, but this new thread will be specifically for the gameplay aspects of Lysithea’s Sweet Escapades: Redux.

Please post all questions concerning certain aspects of the gameplay, be it difficulty with bosses, finding items, etc. here and other players (or myself of course) will try to help you out.

We are aware of how difficult the game could be, so I felt it necessary to make this separate thread specifically to address these issues for all players.
Thank you all for playing our game and we hope this can make it a little easier for everyone that wants it to be!

Quick question, are we supposed to find a way to get the mercenary with us before we get the armor to the girl - forgot her name - or is he just meant to die?

As long as you fought all the mimics in the tent that you can kill from the start (not the first one) you should have just enough money to hire the mercenary as well as some good equipment for Lysithea. The idea was to make the player choose either the mercenary or items to stock up on.

Also make sure to check out the shelves in the necromancer’s tent for some extra healing and mana items.

i see, thanks for the hints!

So I’ve defeated Carol and saved Hilda, then woke up the next morning in the Inn. After I get Hilda, go downstairs, and talk to the Innkeeper about the Witch and Carol’s backstory I can’t leave the Inn. If I try to, I get a message saying it’s getting too late and it’s time to turn in. After that, I can’t sleep or leave, have no further dialogue with the Innkeeper, and can’t go to the store room to see Carol.

Anyone know what I should do?

Oof that’s a real problem, and unfortunately that’s a rather massive bug.
I’m not sure there’s a way to get around it in game yet due to the time stuff.
It’ll be fixed by the next update for sure.
I’m sorry for the trouble regarding this event. 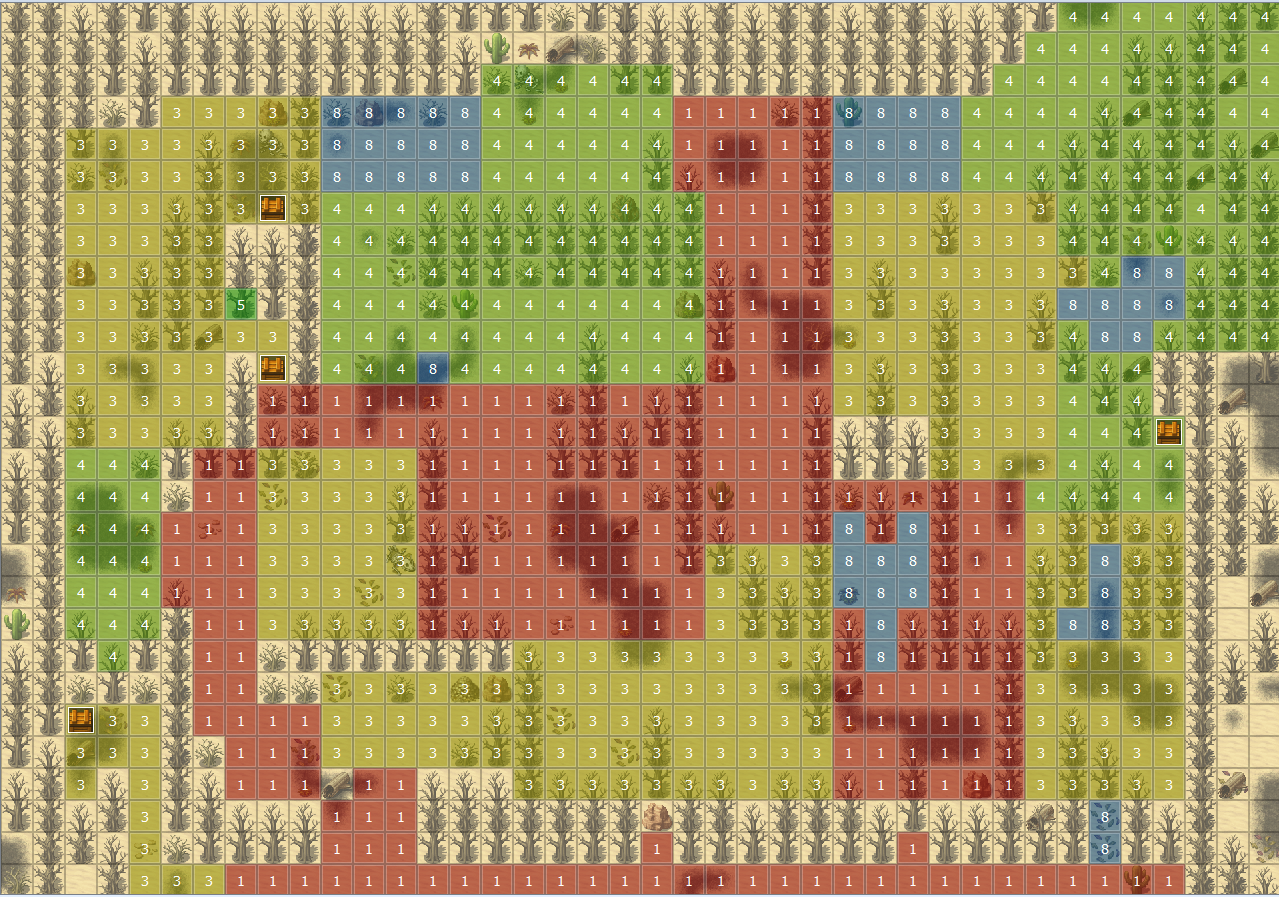 The areas marked 8 are where the Chimeras spawn since I’ve received many questions about where they appear.
By the next update, expect all N.M.Es to be shown through on map enemy sprites and for all N.M.Es to have their own unique movement A.I. upon spotting the player.

So I’m up to the point where you fight Carol, and I’ve no idea how to get rid of the silence. How do we go about not being silenced?

That’s a special state especially for this boss, you cannot remove it.
There is a way to beat that boss even with it.

This is probably a bug I encountered also. You can cheat yourself out by modifying variable “Time” (e.g. in Save Editor https://www.saveeditonline.com/ ) to some small value (it will be more than thousand, you can put it to zero). (Maybe before you first try to go out of the Inn.) This variable drives time of a day after you talk with the witch. If you get it high (as did I) before that event, you are stuck, because you cannot sleep and you cannot leave the Inn. This variable increments itself when you are in town and maybe in some other places as well.

That’s it.
I’ll be fixing that this update.

Wondering if anyone had any tips for the slime depths. I’m having trouble getting my way around the place (and also keeping Hilda from being firmly in the ‘fat’ category all the time, and thus not being able to get into the entrances and such).

I didn’t think about the map part, but that’d probably help me a fair bit in figuring out where to go. I keep getting turned around and get frustrated (and usually end up getting walloped by the giant slime while trying to get my bearings), so I’ll give that a try.

okay, so! first of all, thank you for the physical map suggestion. besides being very useful, it was very satisfying to make. that said, I know I’m missing some things on it because while I have not found a way to the 2F. I’ve found a few 3F basement entry points, but with only notes there. also, the 1F NW map doesn’t have points of interest (either green dots or large slimes) come up on the minimap.

Sorry for the post but I may just be being daft. I don’t really understand the Weight Gain System that keeps being mentioned? Do I have to actively do something to increase the weight of my characters or is it in response to story decisions? I may have just overlooked something but I’d appreciate a heads up.

Ignore my question, turns out I just wasn’t far enough in the game

a lot of it is timing and practice, unfortunately - any particular of the sailors that you’re having a hard time getting past?