Hey all, if nothing else this (which is my first new post), is to try and spread the knowledge of a game I’ve fallen in love with called Project Zomboid. It’s a survival game in a zombie apocalypse, and despite the genre being oversaturated, it’s still a very good entry. There’s a lot of detail in stats, skills, and character creation, and the ground work is already there for some interesting mods as far as this site’s purposes go. The mod workshop is through steam, which is generally not that difficult to deal with, and in the game by default there is already a character weight that is modified by diet and exercise, as well as traits that are applied to your character based on their current weight, or how much they’ve recently eaten. The biggest shortcoming is that I don’t believe there’s any sort of visual change as far as the character model goes, but I’d also argue the game isn’t really about graphics. So, I would absolutely love to see more experimentation with this game, like mods to change player model based on weight, growing curves, or more “interesting” dialogue when stuffing yourself/gaining weight.

I remember a previous thread somewhere mentioning sprites being hardcoded or something among those lines, and so the interest on a possible Project Zomboid mod has quickly dwindled.

Hopefully someone makes something interesting in this thread though, even if it’s just adding stomach noises and burps with no visual change.

i believe the game was updated at some point to include actual 3D models.
But those might also be hardcoded.

The new 3D models are not hardcoded. There are about 2 mods on the workshop that change the female body model. 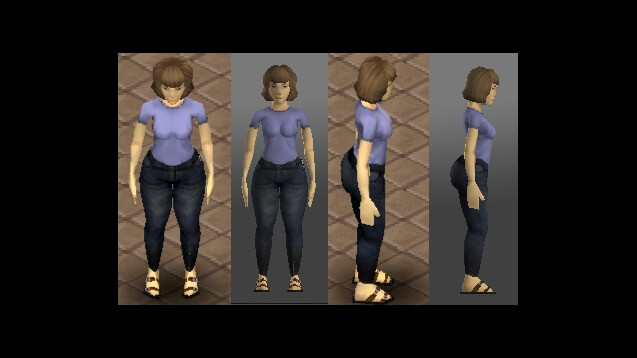 I still haven’t played the game much yet, but it does look like the recent patch may have opened up the possibility of improved weight-gain visuals. The base player model can apparently be changed now, as well clothes & wearables. While you may not be able to change the in-game player model dynamically for weight gain/loss, it’s possible you could script wearables (with big/small variants) to simulate it much like other games (like Starbound Big Fatties) does.

If anyone knows how to implement it, i can rig, animate and model.

in the description of the mod

I’ve got a passing interest at least! Can’t guarantee anything but I’ve decompiled the code and am digging through it to see what I can find. I haven’t messed around in Java or Lua but I’ve heard Java is pretty close to C#.

If we were to make a mod like this how ought it to work? I own the game but I’ve never really played it. It seems like there’s already diet management so maybe that could work. Otherwise there’s always character select options though that’s less interesting.

Well in the game already there’s a weight system increased and decreased based on how much you eat, and possibly even what you eat, as food items have values like calories. So it could be dynamic, based on current weight/your character’s diet and exercise.

I’ve messed around a bit and think there may be a way to swap models at runtime. I was able to get a rudimentary mod made, though all it did was absolutely wreck the poor survivor haha (gif attached)

I’ll look more into what I can do tomorrow and see if I can make this work.

Any progress with the mod? Also is there a tutorial on how to mod project zomboid that you’re following or just winging it?

wgtest1849×332 213 KB
Its totally possible to have a rudimentary wg system that uses clothing like the Starbound BF mod. There are some problems though. You can’t see skinned clothes like shirts and pants. Modeled clothing works, but would need a system to also be swapped.

I think a playermodel swap would be better since it applies to all clothing modded or not. I know model swapping is possible since I was able to change the players mesh and have it update in real time. I think the best way to do this would be to replace the femalebody.x with another model for whatever stage the players weight is at.