NEW UPDATE! Version 1.5 is here! In addition to bugfixes for the remaining softlocks and skill inconsistencies, this patch includes a number of tweaks to skills and items, as well as four new minibosses that can only be found after unlocking Tartarus’ Cradle in a New Game + run! Grab the update here: Pandara’s Sphere, v. 1.5

I’ve uploaded a new zip file for Joiplay users, which you can download via MEGA

Please note that I’ve had to change the exe name back to ‘PG’ due to bugs caused by renaming it which caused the game to not extract properly. To avoid confusion, please be sure you’ve copied your saves to somewhere safe and deleted the old game folder before downloading and extracting the new version. 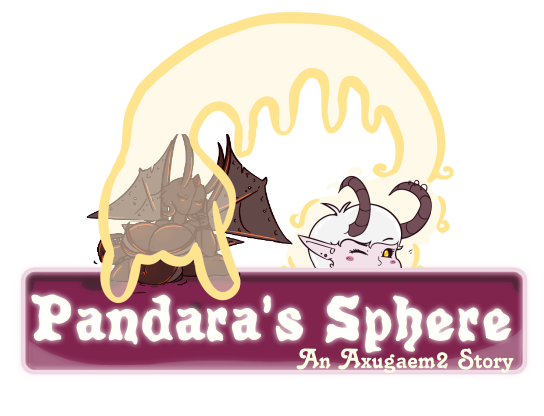 Hi all! Axlwisp here saying… surprise! I’ve got a brand new standalone RPG project to submit for this year’s gain jam! Pandara’s Sphere, v. 1.5 (working title: Pandara’s Gut) is a spinoff story that picks up a few threads from my larger fetish RPG project, Axugaem2, but you don’t need to have played any of Axu2 to pick it up and play through it!

Note that due to the limited timeframe in which I slapped this game together, there may still be quite a few bugs lurking within. I’ve tried my best to ensure everything works smoothly, but I’ll be updating the game over the next few weeks to try and catch any residual issues. Thanks for your patience, and I hope you enjoy the game!

Or via Mediafire: PG

-To play the game, download the exe via one of the provided links and extract it to wherever you keep your fat of she RPGs. Open the extracted folder and click the game exe (the dragon head icon), and you should be good to go!- 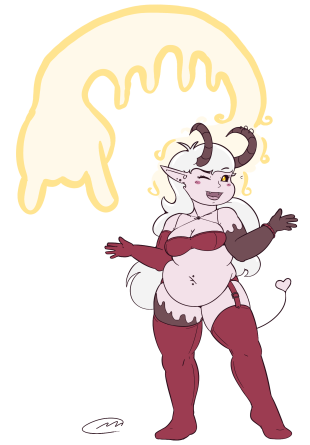 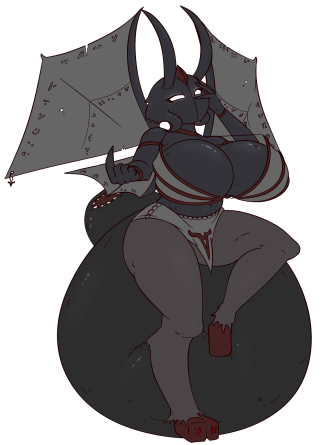 Pandara’s Sphere is the story of Ifri, an aging cherrypicker imp who has lived by the seat of her panties and survived the soul-sucking drudgery of life at the very bottom of the Underworld’s pecking order with her wild, loving spirit intact… much to the vexation of the other demons. It is also the story of Pandara, Elemental Lady of Chaos and undisputed ruler of the planet Imperium’s designated corner of the Underworld. When the lives of these two strong-willed women collide, an unlikely deal is struck, and the demonic chain of power will never again be the same…

Guide Ifri and her unwitting minions through waves of merciless monsters as she seeks to cobble together the ingredients for a repertoire of hellish dishes, from molten-hot magma curry to ectoplasmic gumbo, all in hopes of sating the appetite of the ever-more demanding Pandara. Succeed, and climb the ladder from lowly cherrypicker to trusted hand of Chaos. Can you tough it out and discover the path that leads Ifri through the madness with her spirit intact? or will she end up -either figuratively or literally- forever a helpless addition to Pandara’s growing sphere?

Oh, also you can just say fuck it to the pretentious story and have Ifri eat everything she can get her hands on until she weighs a literal tonne. No judgement either way~

um…all the links are gone

Thank you!! So nice to see a familiar face! I’ve always really liked your work! ^^

Heyo, just a heads up, you dont actually get exp from running from the encounters, been hardstuck at lvl 1 with 12 exp for a while now

Shoot, sorry about that. I’ll put out a bugfix patch for that issue tonight!

Not sure what is up, but I can’t continue the game. Played a bit, got strong enough to take on some of the enemies in the first zone, got a little overconfident and died, tried loading my save that I made, but clicking on Continue of the main menu just closes the game. Tried multiple times with the same result. Is this supposed to happen, am I missing something?

Edit: Realized I am a moron, didn’t notice the cursor was on Shutdown, not Continue, so that is entirely my bad.

I’m really liking this game! There are a few issues I found however. First running from battle doesn’t give exp, to fix this all you have to do is change the common event to exit battle processing at the end instead of the beginning. Next mass decompose is accidentally set to single target instead of all enemies. Lastly, and this may just be a personal thing, holy water is way too rare, 1/15 drop chance is too low I think. Really nice game and artwork this is one of my favorites.

For Flee not providing XP, make sure that you download the updated version at the very top of the first post. It seems to work for me when I play with that version.

Am I missing something or does Hell Spice have a really low drop rate? Loving the game, but I just hit level 5 and the only Hell Spice I’ve found was in a box in the kitchen

It drops from the plant enemies

Well that kinda explains it. I have yet to encounter any plant enemies, just knights, gremlins, goats, and flayers.

Aight, finally found one. Those guys are crazy rare lol

Noted regarding the holy water drop rate! You can also buy it from Bolero at any camp for 250P, if that helps!

Thanks for your feedback regarding the drop rate! I’ll increase the encounter rate for the underworld sprouts in bleak rock at the start of the game, along with the lost souls in the swamp of souls (Ectoplasm also seems unreasonably hard to come by), for next patch!

The underworld sprouts need to show up WAY more often. It’s SO tedious when you have 3 times the amount of ingredients that you need except for Hell Spices because they only show up like 1 out of 20 times.

i just started ng+. are there any hints on how to get the good ending or is it just guess work?

Understood! I’ll buff up their rate of appearance (along with the lost souls in the swamp of souls and the ice elementals in Tartarus’ cradle) for the next patch, which I’ll try to have posted in the next day or two.

Definitely isn’t guess work,
Even if it is certainly possible to miss,
Mostly just make sure that you’re thorough as possible with the second run through!
I.e, do everything you possibly can,
Talk to everyone,
Help them with their requests,
And you should have a new option replacing the ‘worse ending’ option in the final cutscene!
Realistically, if it ends up being too obscure or unintuitive, I’ll add more hints in game.

Should also state again more for the sake of others that the good ending is only available in new game +, just so there’s no confusion there!