Disclamer. This is just a random thought I have no idea if will ever be made in to a game or story. I just opted to share a random idea I had.

So the Basic of the idea is. the player is a “feral” creature. aka just a creature closer to nature like how you can have a anthro fox living in a house and a “feral” fox living in the woods. but your not playing a fox or something your playing a more powerful monster like beast. my default (but If I did make it in to a game I would add more) is a dragon. you just try to hunt expand your den (living space) and gain in power and size. and of course weight. you start off as a much smaller dragon (or other) and as you hunt you get both larger in straight size and weight. likely you gain the weight and then use that weight to grow in size. I was also thinking you could do things to affect the area like a spell that makes the fertility of the area better. more food=bigger prey

I’m not sure there’s much else to say. It’s an interesting idea and I don’t believe I’ve seen something exactly like it but it does bring thoughts of Noone’s and Krishonk’s games.

fair point I was just hoping some people may be able to help be better this idea. Like do I want the main player/monster to form a hoard and why? I don’t think they could have much use in buying stuff but it could attract raiders. or in other words fast food

yeah that could work. fat could be used for magic or at least special magic aka a upgrade system but with a cost weight itself to a point buffs the player (way to much relative to your size is bad. you should not way like 100 pounds if your the size of a small dog kind of thing but when your as tall as a two story building your more like 10 tons on average) with the gain more size being a upgrade
thus fat is both a fuel and xp

Another thing to think of would be of how scale affects everything. For instance:

Looking back on this after finishing writing it and actually proofreading it, I realized I got way into brainstorming ideas for it. If only I could do that for college essays lmao.

Looking back on this after finishing writing it and actually proofreading it, I realized I got way into brainstorming ideas for it. If only I could do that for college essays lmao.

dude I do the same thing alll the time. I have in fact thought of at least the concepts of three sequels to SFRPG well two the third is a remaster and combo of all three. its fine to “over” brainstorm as long as you don’t get stuck with the idea that those ideas HAVE to happen that way.
also I will try to answer all your posts and stuff when I get a chance to write it all down on a proper doc. though do keep in mind this is just a brainstorm I can’r program or art anything and I am still trying to work on my writing and getting comfortable with the idea of writing fetish content. I make these idea post to work out the idea. for either the time I do learn how to program and make the game or can Pay someone else to do what I can’t. that and I find the whole planing thing fun in the first place

Don’t worry yourself too hard about trying to get back to me with answers to those questions. It was mostly just to help add more depth to the conversation. Get the gears turning in someone’s head and hope an epiphany is reached, ya know? If neither of us get anything done with it, maybe someone else sees it and runs with it.

hey every one reading mind helping with one question that’s been on my mind.while I did and do want to go with the idea of well not playing a normal character anthro or other wise in a city and gain weight buy like buying food. its been on my mind that well I don’t know enough to really design the character weight gain in a purely animal style. I mean in context if/when this is every done it can be attempted. but would it be wrong to while still being “feral” they characters are anthro? this came up when I thought of adding some insect based starter characters. mostly spider queen,ant queen and scorpion. (note all the insects would be female since I have the idea they are more minion based class) but insect based weight is hard out side taur or anthro forms.

I think it could look a bit out of place with anthro/taur creatures. if they would look like a Godzilla monster it would be fine.

after reading about fat insects I needed to try to make one. of course insects don’t actually get fat because of their exoskeleton but realism have never stopped me before. 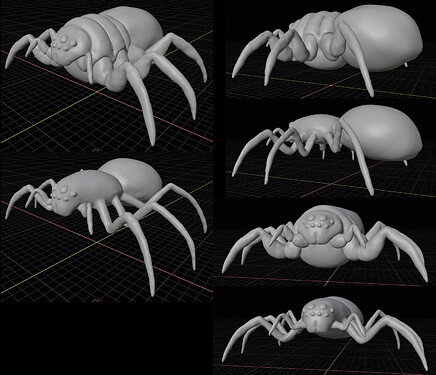 I thought it would be harder but it was relatively straight forward (others would have to judge the quality thought since I’m biased). so I think fat insects wouldn’t be that much of a problem.

Now that I think about it, what creatures are added to the game may be severely limited but type of game it is. If you don’t know how to describe and put into words the process of the insect classes getting fatter, then it maybe it wouldn’t be the best idea to do a text based design. If you were to go with something more visual like the rogue-like suggestion, how would you give the player a sense of being big? Do you make the player character take up more of the screen or just shrink the environment down around them? How would gameplay be affected by your increase in size? If a slime character was added would it just end up being Tasty Planet?

to answer a few questions.

I’m not sure I understand what style of game you are going for or how the game world would look.

both are still being devoloped. this was just a random thought I had not a game but with all the work you and Yamhead have done with the discussion Im trying to turn it in to a game

ok so current ideas. the game as as RPG Survival game. I’m not sure on the rougelike I don’t think I fully understand the term. in a medieval fantasy world. since I don’t know for sure If i can find a artist I am aiming for text based first and thus will need anthro character to better describe anything. So I have decided to use two forms of anthros “tame” anthro, the human with some animal like features, fur/scales/feathers on limbs animal ears and tails that kind of thing. And “Feral” anthro, feral anthro is the animal with a few bipedal traits full body fur/scales/feathers/chitin etc muzzles when appropriate beaks and the like

note you play as a “Feral” anthro

maybe this will no longer a idea in the future

ahh yeah I like the random level not the Biggest fan on permadeath if the game is but it depends on how its handled. also long as the game gives ways to avoid it and its not just you pulled the wrong lever get shot it the head kind of thing its ok