My name’s SeymourCox, fat/fetish artist on FA and twitter. I’m a HUGE fan of platformers and older games, absolutely adore the NES Mega Man games. Though I don’t really play fetish games all too much, I started brainstorming one recently and have had a lot of ideas so far and would love some feedback, to learn if there’s interest in playing and making a game like this, so on.

What’s the game?
The idea for this game is a metroidvania setup, exploring one large area and opening up paths with newfound abilities; with a very Mega Man inspired style jump-and-shoot gameplay.

What’s the plot?
A research lab’s robotics department has suffered a major series of errors, resulting in the robots turning hostile and running amok in the whole building. Answering to their alarm, you arrive on the scene to take out the robots and rescue any employees in hiding along the way. However, robotics aren’t the only project that were in development at this lab…

How does weight factor in? 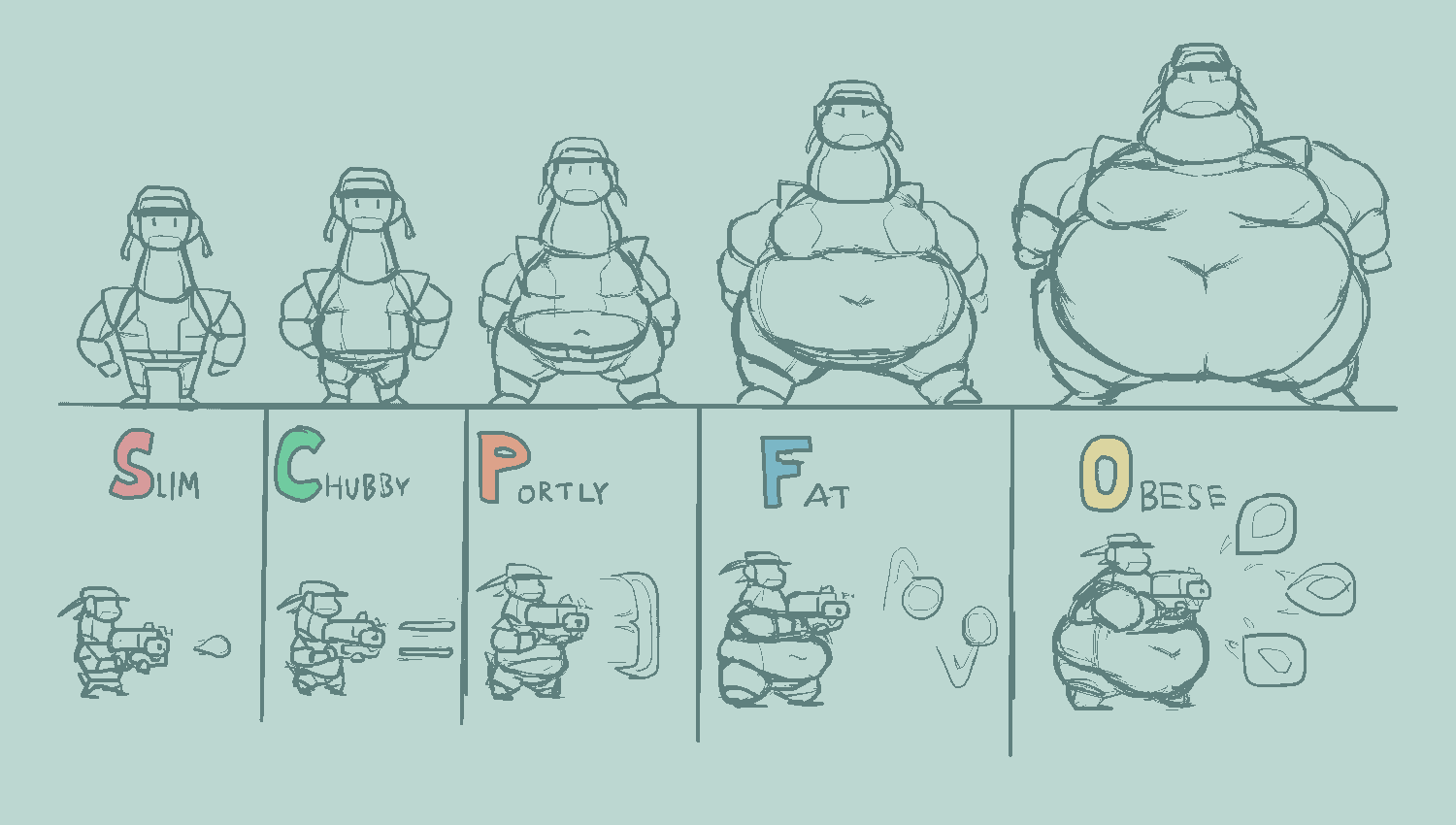 Instead of new abilities that let you open new areas, you permanently gain weight at several points that allow you to interact with certain objects and features in new ways; weighing down platforms, ceiling-mounted pulleys, resisting strong wind, and even just crashing right through floors at times!

Each boss in the game locks you into their boss room, and when beaten, a door to a connected supply room is opened up. Each post-boss supply room contains a gun upgrade chip; and an accidentally created, experimental, hyper-caloric food created by the lab. Both are simultaneously grabbed, and your newfound weight is used to exit the boss room to introduce how to use it elsewhere.

As you gain weight, you start to become a bigger target and your jump height starts to be reduced; so to balance this some you gain more health each time and as mentioned, your gun becomes stronger. Since your agility decreases as you progress, you not only reach new areas; but sometimes must find alternate routes in order to reach some already traveled areas as well.

Other notes?
I imagine that the game should have a focus on showing not telling; avoiding written tutorials or button prompts to instead visually showing what to do. Like in these rough, intro storyboard sketches; where the secondary grenade-launch is shown in animation after the protagonist fails to shoot open a door. 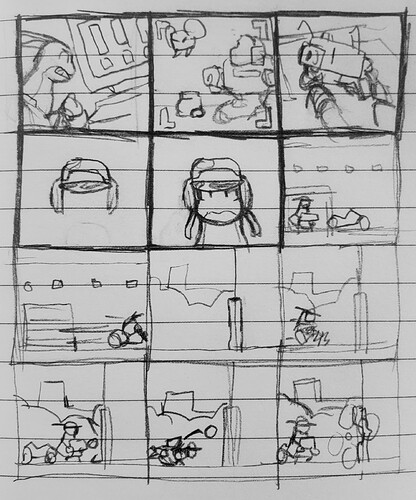 The weight gain has a permanent focus to the gameplay; so no rapid fluctuations in weight gain and loss, nor “lose/do poorly to see the fetish parts” here.

Several employees are scattered throughout the building, but are not mentioned until rescuing an easier to find one early in the game. Finding all of them would, ideally, reward a bonus end screen picture!

That’s the gist of my idea, I hope anyone who comes across it likes it. Of course feel free to ask about it, and if anyone has interest in helping to actually get it started as a project please let me know! At this time I have somewhat minimal programming knowledge but if there truly is a solid interest for this game I’d love to have a programmer involved, but I can certainly try to make the effort to learn that myself and research an engine/platform for this (most likely) NES/Mega Man 9 & 10 styled game.

Thanks for taking a look!

this sounds and looks amazing! the idea that the weight gain actually levels you up instead of hinder you is a good call. also refreshing to see a male focused game on here as a gay man! hope this project goes somewhere!

it would be nice to see something like this.

it might be a bit ambitious for a first game though (I am assuming you haven’t really made a game before because you mention not having much coding experience). the coding itself shouldn’t be to hard since it is not the hardest thing to code (anything on the NES is easy to make now since we have way better tools to make games) and tutorials on mega man like stuff are pretty common. it is more the metoidvania part that makes me think it might be to ambitious.

I do like the idea of being restricted in areas you have already been in after you have made progress (environmental station alpha did something similar and it worked well).

I have been wanting to make something mega man-esque so I might be interested in helping you out. I have to think about it

It doesn’t necessarily have to be a true NES game so much as just styled a lot like one; mostly cause it’s something I find very familiar and would be simpler graphics-wise and such than some other options.
Definitely ambitious yes, it was a bit of a sudden thought and I do have a BIT of experience with some visual/graphical based, simple programming. There’s certainly no timeframe or such in place yet so I hope others will understand if this project’s development would involve some learning time and getting through smaller games first and such, if needed!
Perhaps the Metroidvania-esque aspect is ambitious as well, but I’d think in the long run it wouldn’t be so bad if approached right. It doesn’t have to be super complex after all, more of just a large Mega Man level with backtracking; especially since your core character doesn’t change all THAT much. You know; no ice beam, no shinespark, etc; you get heavier and your gun gets bigger, stronger shots to simply kill more things, faster. And I’m not trying to push it as anything like a massive symphony of the night-like map, or such either yeah

I’m glad you like the idea! Definitely keep it in mind if it’s somethin you’d wanna be a part of and we could try and see what’s next

I’d say the first part of the game, when you’re slim, is probably pretty short so that you can get to the first boss and get introduced to the weight aspect pretty quick. So yeah I’d say the game is something like one kinda short mega man level; with four longer ones basically diced up and mixed in after it yep!

maybe it can work like cave story where the more you kill, the more weight you gain and the better your weapons become

I do understand the appeal of a more “dynamic” weight gain system; but for the sake of this game’s structure and how it’d be set up to play it’s sort of a matter of the more “static” weight gain bein kinda central to it
Though your weapons do improve at the same points that you gain more weight, yes!

something that might be fun to do is having mega man style re-fights with the bosses (though maybe buffed a bit because you have better weapons). it might be an interesting twist on the usual re-fights because in ways you are weaker than you were when you first fought them.
just a though I had

Oh yes yes, I was thinking of something similar before! The first (or first couple) bosses would be relatively easy if approached with your gun upgrades; so by the time you get to the later weapons and bigger sizes they could probably start popping up as enemies.
Full-on rematches though, I could may see working as mid-bosses and the like yeah. Like locking you in a room with two instead of one boss, adding even more pressure on you since now the bosses AND you take up more of the room; or having a boss with different speed to some of what it does, or even the room/floor layout itself making for a harder challenge!

At that rate too, there could (and this is a HUGE “could” to only think about more waaaaay later) be a sort of Kirby arena-style boss rush challenge of sorts that you unlock post-game featuring some remixed rematches

There’s also an interesting opportunity for gating based on weight/size, since you can make it so an area is only enter able when you’re smaller, but then only exitable several weight stages later to help keep the player from getting too lost. I’m imagining a wall made of breakable blocks with a small gap in it.

If you need a pixel artist for this project, I might be able to lend a small hand!

I’m unsure on that front; for now I’m sort of planning on taking on the artwork myself to keep a consistent style and all that!

Certainly going to be plans on how the weight/size will open up (and close off!) the paths you can take and areas you can access yeah, and some definite road blocks to make players know they can’t go somewhere yet. Like an early portion of the game may become inaccessible after passing through it, until you’re big enough to get your way in through a different hall or such! 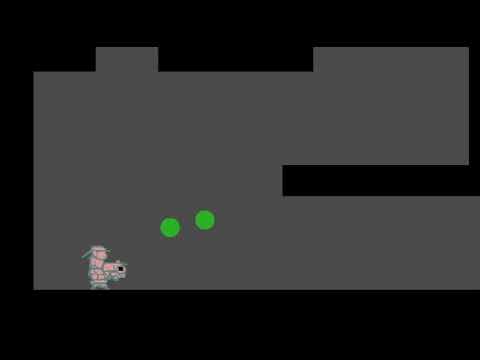 it is still very early so the visuals are all placeholders. this post is more just to let people know that work is being done on this

I know not much has been said as of late BUT discussion and conceptualizing has still been going on, we are planning and working on the game

So, have some enemy concept sketches! 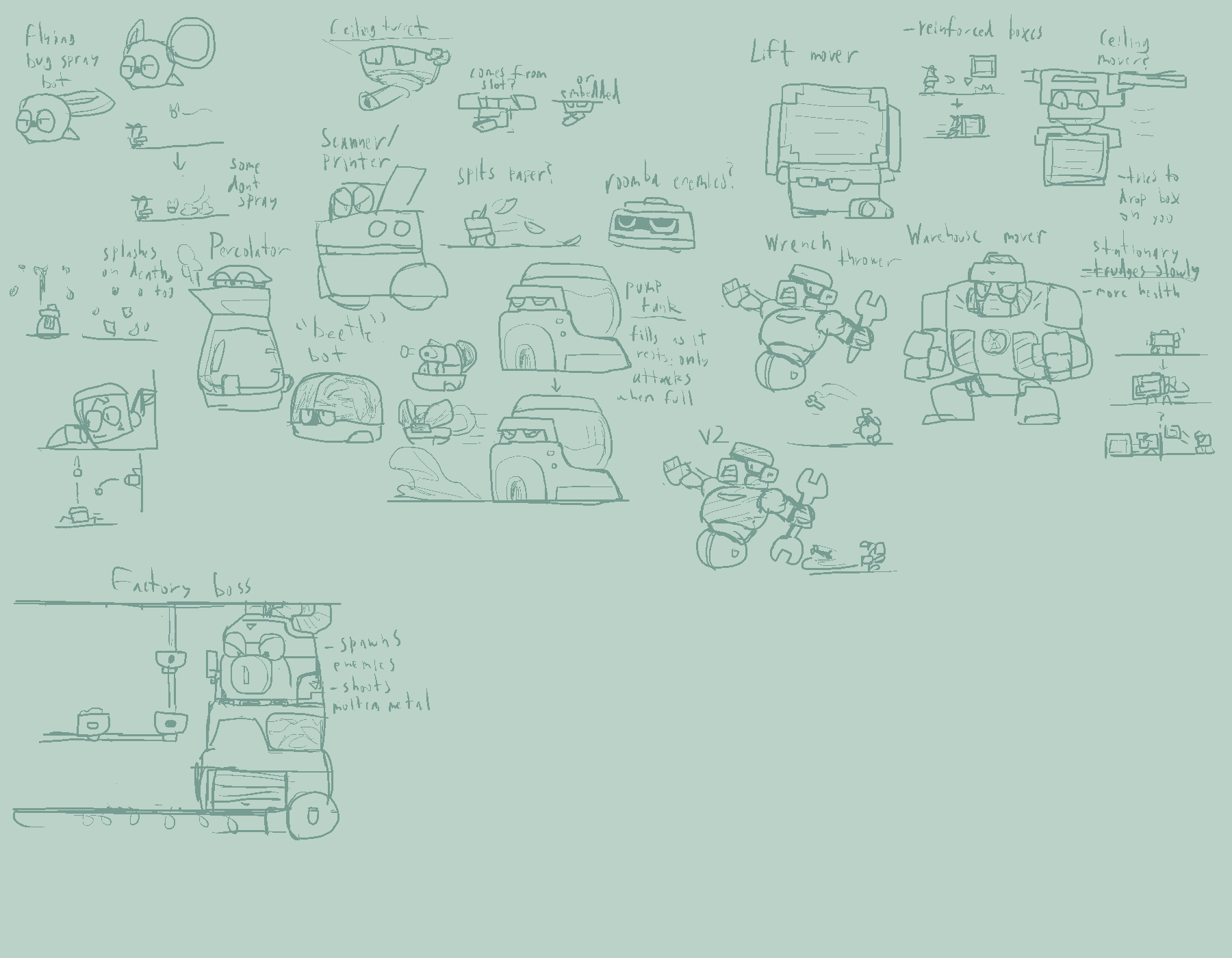 I’m getting a Whispy Woods vibe from the boss. Mecha-Whispy!

Funny you say that, there IS a concept I’ve got going for a tree-themed boss… but more on that later when I can get a visualization sketched up for it!