So for those of you who know me, I am pretty much the only person to make sims 4 weight gain mods. That being said, i’m kind of low on ideas considering i’ve made about 5-6 now. Please let me know what you’d like to see. Chances are, if you suggest something doable I will end up making it. 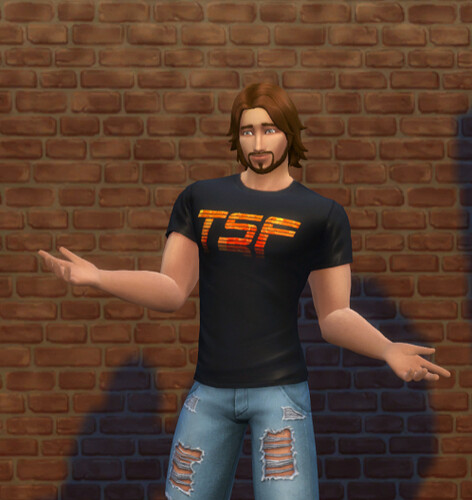 Edit: I decided to change the title so this could serve as a forum for general mod ideas. I am no longer making Sims 4 mods because I am just too busy, but there are certainly still a lot of people interested!

Depends on how big of a project you’d want next, I have no idea if that’s quite a handful to pull off or not.

This has actually been something i’ve been working on, there are just some slight bugs with the career actions. 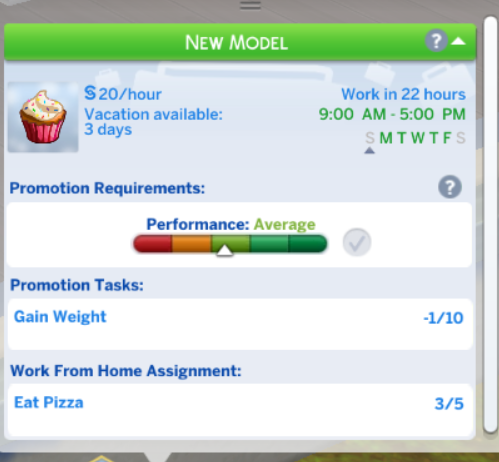 Awesome work, I’ll for sure keep an eye on your developments if you’re planning to complete that. If I find the time I could also build a lot with some CC bundled together and throw that up somewhere so it could be used if you plan for it to be a visitable career.

Not enough Sims 4 weight content out there, so it’s nice to see that you’re looking to introduce a variety.

It works, there are just no daily actions, I suppose I could still release it

You’ve already got the promotion tasks there which is what most people would want out of a custom career mod orientated around gaining weight. The daily actions can always be a work in progress depending on how much time you want to spend on continued development.

Another idea if you’d like one on top of that is perhaps an overstuffed or engorged buff, could cause passive effects like burping or belly rubbing.

Now this, I can get behind

It has been a while since I have played Sims 4, but I don’t think the Glutton trait made eating another way to get Fun, right? I was thinking that a true Glutton would get at least some minimal entertainment from eating. I don’t know if the AI would do it autonomously or what else would be part of a new trait, but it is something I wish was incorporated in the original Glutton trait in some shape or form.

On a similar train of thought, would a Stuffer trait make a sim gain Fun from eating while full?

Yep. Besides, there’s not enough diversity when it comes to food. Adding potatoes and bees will give that. Oh, and try not to get stung…

I’m not sure if anyone has come up with similar ideas, but I have one suggestion. In sims 4 there is fat slider, belly slider and pregnant belly slider. Maybe with those sliders would be real to create more realistic weight gain system: when character eat food her/his belly slider increases on some amount to show belly fullness level. After some time belly slider move back to show that food was diggested and fat slider move up. Pregnancy belly slider may be used to create bigger belly size. So, I am just talking about similar weight gain mod which I made for Fallout 4 ( Weight Gain mod v1.8 (Fallout 4) - YouTube )
P.S. Sorry for my bad english.

I have considered doing that, creating a stuffed moodlet that temporarily extends a sims stomach, also I have always wanted to play with your mods but sadly I play on console lol.

Well everybody, I figured it’s about time for a new mod, and boy I hope you guys like this one. This mod adds an immersive gainer career where you work as a model, you go into work every other day and work about 3 hours this is your photoshoot/filming session. There are not any daily tasks that come with this career, only promotion taks. Promotion tasks: -Eat x amount of pizza (depending on career level) -Eat x amount of cake (depending on level) -Reach a certain weight, yes that’s right my …

how about a mod that instead makes most careers give players a slight weight increase for when they get a promotion?

Thats an interesting idea, but I am not sure how many people would want that.

RIP.
sucks seeing as that’s the main way I prefer to play the sims when it comes to weight gain.
a bit off topic, but I think ravenous is kinda just eh. as it really doesn’t seem like an uptick in hungriness or basic sim autonomy from when I play normally.

More routine weight stuff. I remember that if celeb sim in sims 3 got fat, journalists would gossip about it and there will be a “shame” moodlet.

In sims 4 there are no differences if character is fat or slim. A mod, that adds such miscellaneous things would be perfect. Sims should actually react to weight changes, get moodlets, have preferences etc.

I asked for ideas on new mods, not critique on my current ones, lol.

Yeah thats a good idea, they removed those things im guessing because they got complaints about how being fat shouldn’t be shameful

True. It’s pretty much an engine wide issue and not mod wise seeing as traits pretty much mean nothing in sims 4.