I have just finished the first round of development on the biggest mod I have ever attempted, and I am so excited to be able to share it for the first time! This mod is the first in Sims 4 history to add a Feedist trait: a trait that causes sims to be attracted to fat sims and want to gain weight.

I am treating this release as an open beta; I’ve come about as far as I can without community input, and I’m really excited to hear what people think!

As of right now for simplicity’s sake I have combined feeder/feedee into a single trait. If there is a lot of demand, I would consider breaking them into two separate traits, but that will be a decent amount of work that I’d like to spend on improving the mod first.

Below is a breakdown of the features of the mod:

The main feature of this mod is the Feedist trait: a new trait for sims who prefer to be fat and see others grow. The trait is based on the Glutton trait, and shares most of the same features (this is why you can’t take both, it would be redundant). Feedist sims can also add sugar and bacon to goods like those with the junk food devourer trait (if you have the Snowy Escape expansion, I don’t know if this feature will work without it). 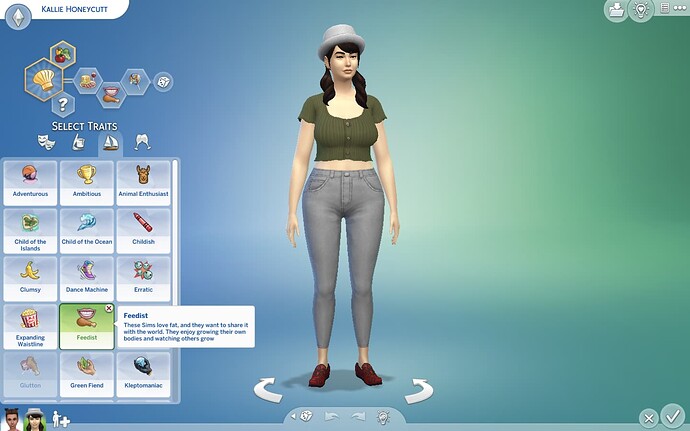 Feedist sims can Enthuse about weight gain and flirt with others based on their preference. Active sims won’t respond well!

One of the other major changes introduced in this mod is the stuffing system. Eating too much junk food (it has to be unhealthy) in a short amount of time will now result in a “stuffed” moodlet. This affects feedist sims, active sims, and regular sims differently. Right now you have to eat about 3 or 4 plates in the course of an hour to build up enough points to get the moodlet and it decays after a few hours; this is subject to balancing based on your input. If sims keep eating you may see another buff as well…

Active sims, in addition to their normal features, are now the opposites of Feedists: they think feedism is an abomination, and they certainly don’t want to get fat themselves! This relationship will be further expanded in subsequent updates.

Weight of the World Ice Cream

The latest feature added is a small one, but the buffs for the Weight of the World and Taste of Diet Ice Creams from the Kitchen Stuff pack have been modified for Feedist, Active, and normal sims.

There are some other things I want to put in the mod but I haven’t been able to figure them out yet. I’ll be working on them in the near future. These include:

If anyone has suggestions for how to improve this mod I’d love to hear it. I’m particularly interested to hear a) if you think there are any balance issues that I should address, particularly with the stuffing system, and b) if you think the mod is fun and if there are other things that would make it more fun. Please keep in mind that I cannot add new animations, character modeling, game systems, or other very complex features.

If there are any problems you experience with the mod let me know and I’ll do my best to fix them in subsequent updates!

At this point I’m also starting work on an even more ambitious weight related mod (which will allow me to further expand the Feedist mod), and if anyone has any experience with or interest in modding I could use your help! Message me if you’re interested.

As always thanks again to @TheSimFattener for his amazing work in this community. I would not be making mods if it weren’t for him.

Download the mod at the link below. To install just put the two packages in your mod folder.

i had a similar idea, however im not too sure if it possible to make. The idea’s that i had was that there are a series of different traits, From every spectrum of feederism, even the dark ones. TLDR
Feeder traits get new abilities(depending on the type), you can feed someone, force-feed or persuade to overeat. Whereas the feedee trait (depending on the type) gets new abilities fitting for a feedee.

Do you think you could find a way to modify one of the pregnacy buff to be the stuffed stage? Of course this would require it to not move up to the later pregnancy stages but instead revert back to normal once the buff has run out

random sims sending food to the sims? Text messages encouraging sims to eat more, random packages of food being sent to the sims.

a dark one would be a sim getting kidnap and stuffed up by some random sim that would take new animations it’s a idea.

a fan who stalks the sim win they get ‘fatter’ and gives them random food like the ‘obsessed fan’ and fights other ‘fans’ who show up that’s a idea for now.

them getting a food withdraw buff win they haven’t eat anything in a bit. having ‘whim to eat’ show up in the whims they have.

OH MY LORD, THANK YOU!

Now to wait on a clothing size mod…that’s prob out of reach tho.

Most likely out of reach. It seems (sims lol) like the game treats pieces of clothing as individual models, except for the few ‘skin tight’ clothing which looks like just a texture. Still, most clothing would have to be modelled/remodelled

This is super cool! I am super hyped to test it out. I’ve been away from the community so long i’ve missed out on a lot of stuff going on here apparently. I am super thrilled to see other people creating sims 4 mods in my absence. Keep up the great work! I will try and test this out and provide feedback and ideas (that are actually feasible) when I get the chance.

Thanks, I’m super excited to hear what you think!

Not sure if you have the capacity but like I said in my main post I have another mod idea that is even more ambitious and will allow even greater things to come out of the Feedist trait, would love to collaborate on it/pick your brain sometime!

Yea, I am sorry I have never gotten back to you on that. I just haven’t been super active on this site any more, as well as I just rarely play The Sims 4 anymore. If you have any specific questions you can always send me a message and I will try and reply, but to be honest I am fresh out of ideas for mods.

the feedist trait is corrupted… apparently.

Well I liked the first part about the content and I would like to see this mod evolve further but I won’t try it just jet because the two households I play with have my simself as a husband and I wouldn’t like my wife to dislike my sim just because he’s not fat. So if there could be a feeder/feedee trait in the future, that would be perfect and would open up a lot of possibilities in the game’s story, at least for me. but i like the direction of the mod so far, so keep the good work

Thanks! At this point the attraction part of it hasn’t been implemented, and I don’t think I’ll ever make it that a feedist sim dislikes another for being thin (may have misspoke in my OP), just that they want them to get fat.

Would like to see wg type of force feed option for people with the feedist trait, prob have others with the same trait enjoy the force feeding and others being obviously against it.

Something like that is much easier said then done, assuming you mean have actual animations and all that.

Doesn’t one of the addons have a force feed animation (fed person suffocates to death).

Hello! I have a question, this mod still works for the lastest patch? Meaning that it’s not broken or something. Thank you!

I think so, if it is let me know and I will try to fix it!

Do you have XML injector installed along with the mod? It was recently brought to my attention that not having it may cause problems. Also is your game set to use English? It should still work with other languages but that may also be it.