Decided to try my hand at making a Quest game, since making sprites for RPG or renders for Ren’Py aren’t really my thing. This is a college wg game, inspired by Sara Goes to College, Amanda’s College Journey, and Kate’s Uni Days, all of which were really fun to play. My favorite part was how you got to play and control the character for about a day at a time and your actions then impacted your weight over a time skip, which I categorized as an “episode”. For version number, the second number is the current episode while the third is each subsequent version with bugfixes, etc.

So this release is the first episode, and not going to lie there isn’t that much content. I’m more of a programmer than a writer so I spent a lot of time making a somewhat complex framework to the game and planning. There are a couple small secrets to maximizing the weight gain but that’s pretty much it.

You play as Sylvia and start during her summer break before college. Sylvia is ambivalent at best about her weight, participating in sports and having a mom that is mildly controlling about her diet (primarily because she participates in sports) kept her at a pretty healthy weight with little to no effort.

I intend for there to be 2 relevant stats, obviously Sylvia’s weight and a more hidden stat I named gluttony. Gluttony is going to be used as a requirement for certain choices, for instance choosing to really pig out at a buffet or gaining the maximum amount of weight.

As of episode 1, you play through your older sister’s birthday party and will finish being able to see the results of your choices for the summer. The maximum you can gain is 10 pounds. Feedback would be appreciated as this is a very barebones start to the game. Other than bugs I didn’t catch, some of the characters are missing dialogue at certain points but I felt like I had enough proof of concept to share. 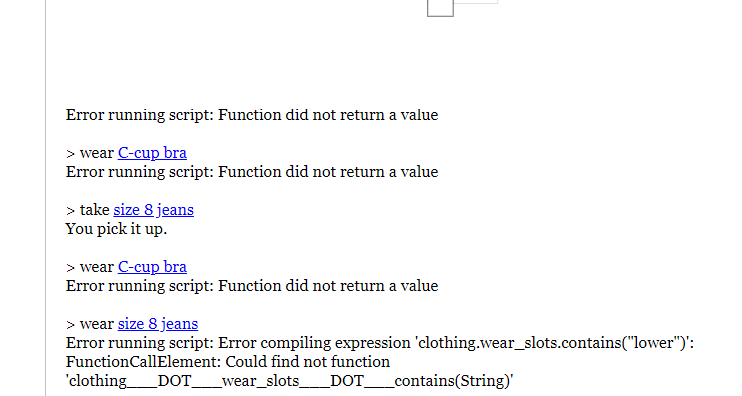 image742×396 9.9 KB
This seemed to occur after I explored the whole house, opened and closed everything that could be opened and closed, went up to the bedroom, and then promptly stopped wearing all of the clothing before going to bed. I can now no longer leave the room nor put on clothes, which is a wild sentence.
1 Like
Moo_Cow July 3, 2022, 12:28am #3

Game just freezes in the bathroom when trying to remove every piece of clothing for the mandatory shower, which is tedious by the way.

This seemed to occur after I explored the whole house, opened and closed everything that could be opened and closed, went up to the bedroom, and then promptly stopped wearing all of the clothing before going to bed. I can now no longer leave the room nor put on clothes, which is a wild sentence.

This is a result of me trying to make something more complicated than the game even needs, and then forgetting to test it. You actually don’t need to change out of the towel to leave the bathroom which is how I missed this.

Regardless, I think I’m going to be reducing the significance of clothing to something that only needs to be managed once or twice per episode, as I agree with what @Moo_Cow said about it being tedious.

I updated the file and probably fixed both issues

i approve of this game.

Seems like you can put the leftovers away again, retriggering the ending(?) and breaking a few things, like the scale. Excited to see what you do with this, though!

Yea i havn’t been able to complete the game without experiencing progression bugs. I like the format tho.

Fixed this, minor oversight on my part. I’m also excited for my plans for this, so hopefully they’ll play out!

What kind of progression bugs?

Errors with the scale not working, Can’t progress beyond the second sleep session, I believe it’s the day that the mom has the appointment. Unless I just can’t figure it out.

When you go to bed the second time it tells you that this is the end of episode 1, which is as far as I have made the game.

What about the scale isn’t working?

It will either show the starting weight, 131, or an error. I’ve not managed to get it to show anything after the end of content check.

Similar issues apply to the shower and mirror: they don’t appear to update for the ‘epilogue’ section, and sometimes they seem to not update for the post-dinner section prior.

Thanks for letting me know, I just forgot to write the descriptions for the player at these points in time. I’m probably going to rework some of how the descriptions work in the future, but for now I believe both the scale and mirror should display properly at the end of the time skip.

I actually decided to log in to write this, and I don’t do that very much.

Your game isn’t big, it isn’t much, the writing isn’t wonderful… Actually there isn’t anything to play right now.

BUT there is a concept. A really good and interesting concept. Some may think that there are too many college themed games out there, on this forum. Well, maybe that’s true, but this game seems different. I really love that you have a more advanced mechanics in mind and that you don’t start directly in college, but in your own house, and there you have some choices before attending the university.

AND there is something more about the wolrd. It actually has some lore. It isn’t much, but it is here. There is something that is different from any other college themed text-game on this forum. Personally, I don’t like werewolves, but half-elves? I hope you’ll think about some interesting and pretty characters!

Good job so far, man. Keep doing and don’t give up, you can achieve something different and amazing.

Oh no, now there are expectations. Thanks for the kind words though, it is definitely still going to be a college themed game, but I am trying to have my own unique spins on it. For instance, I don’t think there’s anything wrong with the other games that default to you choosing a meal plan, but I would like to try to have something different for the first semester that’s still on theme.

I’m still not sure about how much lore I want to put in the game, I had a couple ideas for events/action sequences that add more to the lore but I figured not everybody cares about that kind of stuff.

I also figured I’d mention this, the game is very much a side project to me as I am both a student and working part time. I work on it when I can but with the complexity of some of the things I code/plan to code, updates will take some time unfortunately.

I think most of us on this forum are used to long waits before updates. Take your time and do whatever you can do, just not push yourself too hard, alright?

just played and it looks like its gonna be fun

I also figured I’d mention this, the game is very much a side project to me as I am both a student and working part time. I work on it when I can but with the complexity of some of the things I code/plan to code, updates will take some time unfortunately.

I think most of us on this forum are used to long waits before updates. Take your time and do whatever you can do, just not push yourself too hard, alright?

ya we are lol

For the life of me I cant figure out how to gain 10 pounds instead of just 5.

I tried everything but i couldn´t do it.
If someone knows feel free to tell me.

Hey, it’s a good start so far. I’m stuck though and not sure if I’m the only one/being dumb - after the time skip and giving Megan her gift, what am I meant to do? I’ve explored the entire house, looked/interacted with everything (I think) but when I try to drive, it says there’s no need for me to and I can’t find any way to progress. My weight is still showing as 130.

I tested this to make sure I didn’t break something, all you should have to do is Go for donuts after picking up Megan at the airport and accept the job by calling Samantha and then the manager with the phone