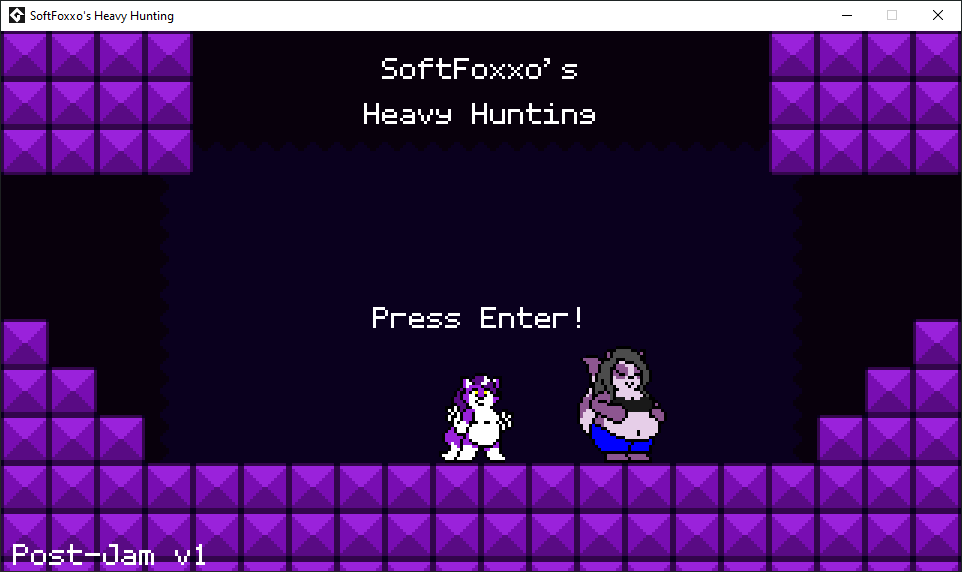 I’ve been chipping away at this little-by-little and since the Jam, I’ve added 3 more levels, a second playable character (just for fun), and I tried my best to improve upon the game’s performance. I’m unsure if I’ll continue much further with it, since I’m planning on working on something that isn’t a platformer.
This has been up on itch for a while now, but I’ve had it hidden from searches since I planned on posting it here for everyone.

The game is “Pay what you want” on Itch, so if you want to play for free, just hit “Take me to the downloads, please”.

The game’s changelog, controls and download page can be found here:

If you’d like to look at the Jam version, here’s the thread (but be aware that it’s locked):

[image] This was a short project I started on Saturday, and pushed through to finish quickly. Feel free to post your high scores on here! There’s 5 levels, so plenty of opportunity to do the best you can! If you have any trouble with the levels, there’s a handy-dandy reset button - just press “R” or the Left Trigger. Revision 4 adds WASD for movement, and JK for jumping/running, respectively. Revision 3 adds a (skippable by pressing Start on your gamepad, or anything on the keyboard) intro …

Played it. Beat it.
Controls are annoying up to the point you remember sprint exists then they are fun.

A cool thing would be to make the level select be a level itself and each level when beat will open up the path to access more levels. it’s an idea.

Oh cool, you know Zell too. She is so cute.

Bug report, I sprint-jumped and hit the corner of the horizontal moving platform in level 6, this lead to me getting clipped inside the platform and being zipped into the wall next to it, getting stuck.

Took about 15 minutes of attempts to get it to happen.

I have a bug report, a request regarding design and mechanics, and a request regarding keyboard controls
As for the bug: When at the smallest size (mini mode? Whatever), the character often still only jumps just under four blocks instead of six.
As for the mechanic request: It’d be great if in the thin-but-not-short weight class, the character could actually jump a full four blocks instead of barely missing the cut off. This can cause the character to get stuck in level three if they choose to explore the stairwell-type-area.
As for the keyboard request: Allow the player to use Up/W to jump, Down/S to use the fat vats and exit levels, and Shift or double-pressing a directional key to sprint. This would be so much more intuitive than trying to use Z and X or J and K for various actions.
Some indicator of what the controls are being shown in-game would be nice too.
Edit: There’s also a lovely little pop up when you start the game that just says “here”. Pop-ups are annoying in all contexts and that one in particular should be removed.

Edit 2: I just realized that I was going to leave this comment without any positive stuff. I actually really like this game, including that lovely pixel art and the themes and mechanics, so I also want to say thank you for making it!

@Secret314159:
The intended jump height is for under four blocks when you’re not running. If you run at full speed (which is shown by the arrows), the jump height should be a little over five blocks. I noticed that error in level three, and I’ll modify it so the player’s smaller beforehand and so it’s impossible to get stuck after getting bigger, and I’ll look into adjusting that weight size’s jump height. I’ll check to see if that’s a possibility in other levels too, before uploading a new version.
I’ll look into the usage of that control scheme you suggested. I think the double-pressing of a directional key might cause problems, though. I’ll add a controls screen later, after fixing some bugs today.
The pop-up is actually a small goof on my part, though! I left that in by mistake, as a way to test the save data. It’ll happen if you hit “Reset Data” in the Options screen too, if you’re curious. I’ll make a small fix for that later today, with any level edits and other bugfixes.

Also, thank you for playing the game! I appreciate the feedback.

It’s hard to replicate, but I remember this happening while working on the Jam version so I’ll try fixing it later today.

I uploaded version 2a just now! This includes a few collision bug fixes (untested, but it should keep you from getting stuck in the floor), and some level modifications to make it harder to get stuck in level 3.

Just put a few full timers worth of attempts into getting stuck there again, never got stuck, was the fix just making the floor eject players upwards? because that is what it looked like happened when I hit the corner just right.

Yeah. It’s a simple fix while I try to work it out so you don’t get stuck in the first place. It shouldn’t be too jarring if you’re just stuck a little bit, like how it looked in that video.

Played the Jam version too and loved it.
Great sprites and cool NES style mechanics