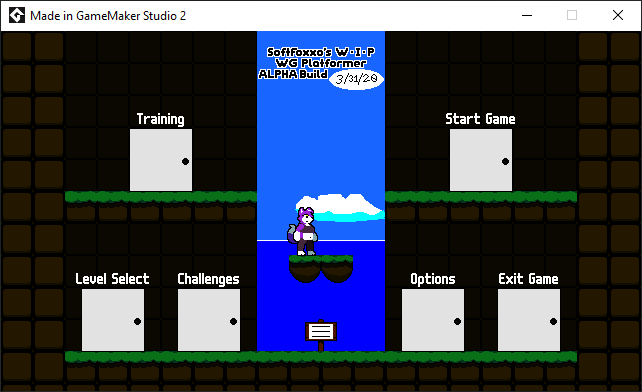 This project hasn’t been worked on in months, and I’m extremely sorry for it. Most of the project’s files got corrupted in the transition to Game Maker Studio 2.3+, and I’ve made some developments on how to program the game better (I learned and used them during this year’s Gain Jam). Right now, I’m working on a few levels (and some back-end stuff) for an update to my Gain Jam submission as a post-Jam update, and I’ll make a new thread for that. It’s a different kind of platformer since its mo…

UPDATE (3/31/2020): Just some small bugfixes at the moment! You can also try out the “open” level I’m working on, but it’s very incomplete - you can’t even complete it, so be sure to hit “Esc” to quick-end the game, or press Pause to exit via the menu.

Make sure to fully extract the zip file into a folder!
There’s also no sound yet, so don’t worry about your sound setup.
The game will boot into the “Options” menu by default when you first launch it, which is where you can read the controls you have set for the keyboard or gamepad, re-bind either one, change the screen size, or even change the icons used for hints! The only thing that saves, however, is your control binds. this has some good potential. the spin-dash is fun to use and if you could jump out of it would be even more fun.

jumping off the moving platform in level 2 is a bit inconsistent, I couldn’t jump off it and run at the same time. I don’t see why the timer is there. it’s too long for it to force the player to pick up the pace, so why have it timed at all (unless it will be relevant in newer versions)

the player character is cute. also, not bouncing on enemies when you are fat is a nice touch

Can you send me sprite sheets, I want to redwaw some things, pls?
P.S. A floatable platform is too short.

I like what I see so far, lots of potential here I think. So far all I can really say from a gameplay perspective is to do some adjustments on player movement. Jumping and walking feels sort of “sticky”.

I understand what it’s just a demo, but I’ll say it. Mechanics from SMB doen’t suitable for this character, however because she can just stuck in pipes, so they are unwanted. Exist more acceptable variants:

As a character can break bricks horizontaly, the main environment should be a castle with traps, mazes, puzzles & challenges(trials).
I have a pare of ideas about trials with Butt Smash :

In general this project has much to strive for, because it looks like a clean slate.

It literally was just me tossing together a bunch of ideas, so it’s definitely a clean slate. I started it on Saturday, with the only re-used code being my system for drawing to the screen, and the camera system. It can actually scroll vertically, or move like a MegaMan-style sliding transition between screens. I just did a “Super Mario”-like because it was quick for testing out the ideas I wanted to do.
I’ll take these ideas into account for later! I kept it simple just for a quick challenge. The spritework can also be reworked at a later date, when things are closer to what I want. (also the black outlines are done in-engine, just for reference)

And by the mechanics of SMB, do you mean the powerups in general?

A cute demo. Too bad I hate playing platformers xD

On the topic of sound effects, have you looked into something like https://www.bfxr.net/ at all? This program, though not particularly straightforward, is capable of making a pretty good variety of sounds. And according to the page, any sounds you make belong to you.

No, I hadn’t! I’ll look into this for the next update (not the one I’m about to update the post with, though).

Updated the main post! Check out the new update, with added Gamepad support and a proper tutorial!

I’l keep an eye on you. I once worked on a platformer and failed due to a mix of overwhelming myself and being “stunned” by a surgery. Hope your project goes far!

Cool stuff! I feel like you’ve gotten the most important and difficult part out of the way, making appealing sprites! Seriously, this is too cute. I feel like there is some good puzzle platforming opportunity here.

The controls feel somewhat unrefined and it’s pretty short, but that’s what happens when it’s a demo. Otherwise, the character is adorable and the game’s got potential! hope you keep it up

I put in a big update today! I’m working towards keeping these updates no further away than two weeks from each other.
I updated the control schemes for keyboard and gamepad, because the old run button is going to be an “Action” button based on the form you’re in. Powerups have been removed in favor of “forms”, which have yet to be fully functional (but are planned to be like Wario Land 4’s abilities). The idea is that they’d work for puzzle-solving and exploring through bigger levels, but sometimes there will be smaller levels (such as the one in tonight’s build) that scroll more like a MegaMan level.

Oooooh more of a megaman/ shovel knight style game I see! Not gonna lie, this is really starting to get alluring~

Dumb question, but how do I get to level 2? Every time I ring the bell it seems like I just restart the first level over again.

There currently is no level 2