Hi, I’m reallyexists. I made Super Juice Tycoon for this year’s Gain Jam. This is a project I started earlier this year, and have recently returned to.

It’s a wrestling game (simulator?) which will focus on fat lady wrestlers using their bodies to crush their opponents! You play as an up-and-coming wrestler seeking to make a name for yourself. Wrestling is just for entertainment, though, so you have to put yourself (or your opponents) over, put on a good show, and try not to actually hurt anybody. 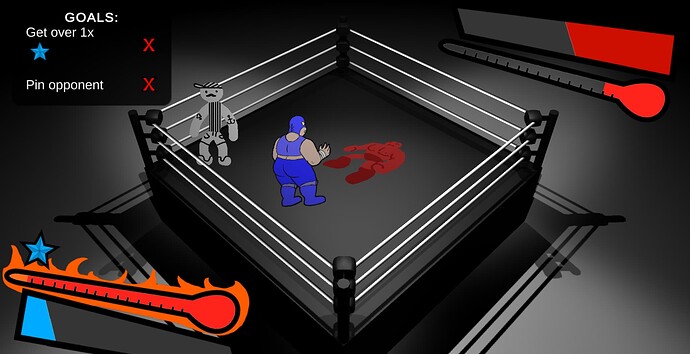 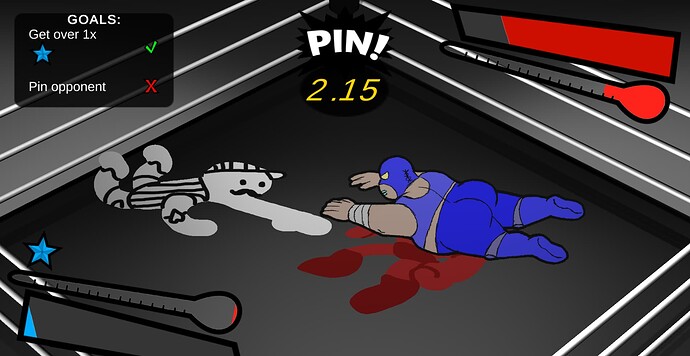 What I have so far is a rough demo. It’s a proof of concept where you’re booked to squash a jobber, in the form of the enigmatic Test Wrestler. All references to real-life wrestling are over 30 years old, including the commentators, who might not make it out of this demo.

Gameplay is turn-based: you select a move, then complete a quick time event with the left mouse button to pull it off. You do a QTE with the right mouse button to sell for your opponent’s attacks. You can make the QTEs auto-succeed or slow them down in the Options menu.

In this demo, you have to fill your Heat Meter up one time and then pin Test Wrestler.

The plan is to implement a series of matches (and re-matches) against a stable of opponents, bookended by a visual-novel style story featuring out-of-ring interactions with each of them. Maybe some stat management type stuff. The story will involve clawing your way up from the bottom of the card, winning a title and defending it while developing relationships in the fed and getting ever bigger and stronger.

Let me know how it feels to play and if it’s a convincing facsimile of wrasslin’ goings-on! I only just got interested in it this year and my knowledge is… not the widest.

Here’s hoping the Pig Queen from the Super Juice series makes a special appearance as a secret unlockable wrestler!

All whimsy aside, I look forward to giving this a try later to get a feel for the gameplay.