Are we allowed to drink Coca-Cola while we play?

Will there be an itch version? 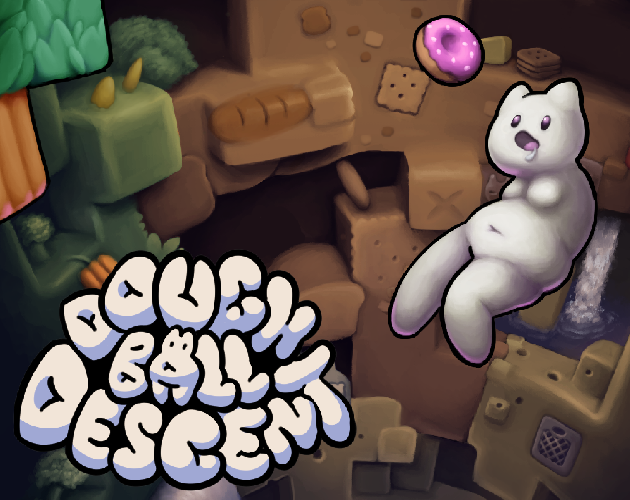 So long as it isn’t diet coke

yep… can afford it.

played a couple of rounds and boy i managed to eventually get past 1 loop of the stages. the only reason i couldn’t get further was because i got stuck. but my build was really busted.

had a decent pool of hearts that often got healed by defeating foes, and with food giving brief invunerability at rapid intervals i avoided a lot of things that would’ve hit, and even if it did due to how quickly the pounds were adding up it got negated a lot of times. it was insane just how litterally nothing could stop me (expect for getting stuck) and i would’ve been curious how far i would’ve gone with that build.

I got so many pounds at the end of that run I got an image that litteraly said: Stop playing.

i’ll be waiting for the next update to come. but so far it’s been a good time

Is there a plan for a native Linux version? Looks pretty cool!

I’ve looked into it a little while attempting to do Steam Deck support, I’m unsure if simply doing a linux-targeted export on GMS would work but I’d be willing to try it

it’s possible i may have a problem… 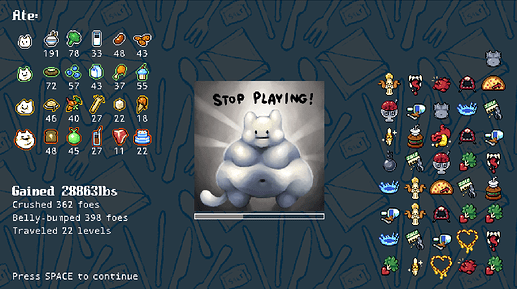 Only reason i stopped was because i got stuck

but… that’s a PB for me at least

I’m kind of disappointed that that’s the highest size image. I was expecting… bigger than that.

Also I keep having trouble at either the dairy section or the meat section. Even with the spin-bump it’s hard to really dodge most of the cannonballs in the dairy section, and if I’m lucky enough to reach the meat section, I’m so worn out that I don’t reach the 3rd area of that section. Though I am thankful for the update that eased the difficulty of the fruit/veggie section by a small bit. Most of my deaths were due to either those durian slugs or the peashooters.

what usualy worked for me was reacting to the danger zone the cannonballs have and taking the shortest route, and maybe it’s easier to avoid because i often opted out of getting the spin bump because for me it gives good horizontal movement, but due to the cool down going down while switching direction is very hard, i found it a bit of a nuisance so i avoided it every time.

as long as you aren’t rushing too much and give time to scout the lower blocks, you can often plan your next move and where to descent next.

the moment those cannonballs come into play, descent as quickly as possible. the faster you have those ships off screen the less cannonballs you have to deal with overall

as for sizes There’s a chance more might be added in future updates, if scores like mine are possible then maybe it can be considered

(also funny you mention this being the highest size, the score was so high that it repeated this image at least 3 times in a row, got to hear that stock fart that many times too. i really hope new sizes get added.)

i agree with your first line

be me
think to themselves: okay let me play one round to pass the time
The run: 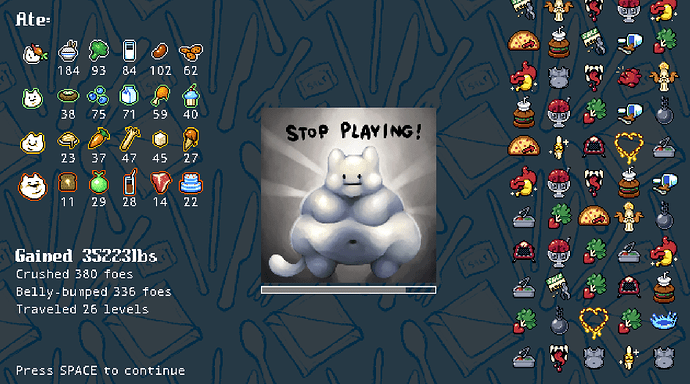 another PB… though at this point I’m starting to notice once you get going in a run… nothing stops you other then getting stuck. past loop 1 what danger is there once you have plently of upgrades?

you are invincible half the time when aiming for food, which is encouraged by the combo, get lots of pounds quickly which prevents damages, and with how fast you defeat enemies you often heal that damage without breaking a sweat.

the power rush is great and all… but sadly it makes the game go from difficult to no challenge at all. I’d perfer highscores if it feels earned and not bulldozing over all the challenge until something stops you.

Yea, without means of breaking through the metal boxes there is a stopping point, per say. However it does leave the game a little lacking in a way. I still think having some sort of boost of your choice at the start of each run would be nice, but that’s just me I guess.

I do wonder if I should shift my design focus away from looping to some extent; the original plan for the game was to have a finite endpoint at the end of the 5 areas but due to the time constraints of a game jam we settled for 3 and added looping to let players keep going as long as they like.
I definitely will not be removing looping but I think it should be a cherry on top, an optional bit of indulgence/victory lap of the game. Following Nuclear Throne’s approach of having a final boss/challenge, optionally looping, and then optionally from there another final-er boss to aim for once you’re bored of looping and also somehow alive.
For the time being, I think I should prevent Comfort Food from stacking ridiculously high rather than nerf its effects. Additionally I’m sitting on several items with the targeted aim of dealing with softlocks, and considering novel threats for looping like a metabolism system to rush the player or a Spelunky 2 ghost.
None of this is set in stone and I enjoy your feedback, thank you for enjoying my game!

…Seriously, why don’t they just drink the milk? It’s literally being dispensed at regular intervals directly above them. All they’d have to do is catch it! They’re already drinking little glasses of milk on that stage anyway, so it’s not like it would be all that different.

Well, the shopkeeper might catch on after a while. But still.

It’s a slippery slope to start drinking the hazards, next thing you know Dewey will be eating the blocks!
I enjoy fanart enormously, I think posting here is allowed but other avenues would be on Twitter under #doughballDescent, similarly tagged on Tumblr or FurAffinity with maybe an @ or DM at me, or maybe in the art section of the Steam Community, though I’m not sure what their TOS is