Hello, I’m YummySinpie. I am a WG/BBW artist you may have seen around. I’ve taken on the role more as a creative director recently, putting together a small art studio. Creating this series is an absolute passion for me but at the same time it is not a mere hobby, I would like a career writing, drawing, and creating WG related fiction. For that dream to be realized, I introduce to you today my next step towards that– The BIG Royal Rivalry WG Visual Novel!

Last month I began initial development and art creation. This visual novel project to me is the evolution of story telling within the weight gain fetish for me. Going from sequences to comics, comics to visual novel - I want a larger platform to expand on.

The comic series the VN is expanding on can be viewed on DeviantArt for those interested. I’ve been updating it for more than a year now releasing a page per week! [Please forgive my earlier art!] 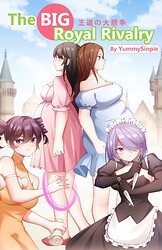 War is soon to erupt— in a romantic season like none other! The Prince Leo is to be participating this season and it has drawn noble women from throughout the land to the capital. Among these many vying women, the prominent Lady Yummy and Alden sisters will be in attendance. What they don’t know is the loveless Prince has the sickness for thickness. To catch the eye of the Prince, the ladies will need to forfeit their petite figures if they’re to stand any chance!

Win the hearts, minds, and bellies of the girls, become a harem-feeding-dominatrix, or just enjoy some feeding sessions~

The BIG Royal Rivalry story universe is about to expand! Replay your favorite scenes from the comic and all new ones with different paths unfolding. The visual novel’s scope and world goes far beyond the comic series. Play as either Lady Yummy or Lady Amelia for unique perspectives into the world and society. Uncover the truths and unmask the hidden evil consuming the world.

Multiple paths & endings! There is more than one way to win this war of love. The Prince Leo is merely the catalyst that has brought these characters all together. What happens next is up to you! Perhaps you would be more interested in romancing a lady for yourself? Maybe just one lover cannot sate your hunger?

Who will be left standing? Based on your choices, the girls will find their waistline expanding and standing being much more difficult! Oh my, maybe you should look in the mirror too~ 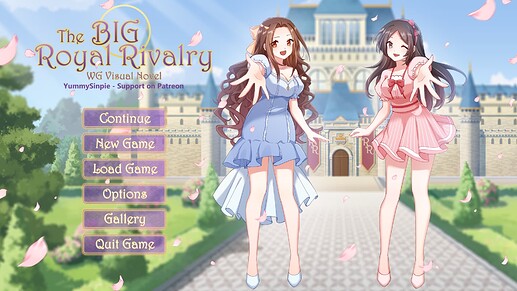 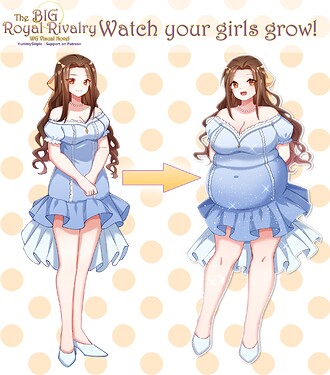 Making a visual novel full of hand drawn art is a costly endeavor. My own passion and time is dedicated to the project but I am constrained by monthly budget. With your help, I’ll be able to pay my fellow artists who work with me on this and greatly accelerate the game’s creation!

The best place to support the project is on Patreon - that’s because it’s my primary way to reward you!

Any tier level would be greatly appreciated and helpful! At the $10 tier and above you will be the closest to the projects’ internal development with early peaks at art, giving feedback in comments and polls. Patreon.com/YummySinpie

Also, I do have a Ko-Fi you can donate to also to help out! Ko-Fi.com/YummySinpie

Please feel free to ask me any questions here!

Talk to you soon

Hey, welcome! Glad to see you made it.

Thank you Krodmandoon!!! Unveiling my last 6 weeks of work really making me nervous!! But so glad to finally have the post up!

I love this post, and I am thrilled by the prospects it presents! The art is amazing, and you are a very talented artist!

I would like a career writing, drawing, and creating WG related fiction

I hope you realize your goal, and I plan on pledging to make those dreams-and The BIG Royal Rivalry-a reality!

Reminds me of something along the lines of Princess Maker, but with pre-made characters and weight gain not being a detriment.

Aww thank you so much Xodan!!

You’re too sweet!! Let’s make it a reality together!!~

Wow! That is a heck of a first post and a strong start to a project! Well, “start as you mean to go on” as they say, and I wish you continued success with the game!

Welcome to the forum!

I’m the most hyped I’ve ever been for a project on this site, everything about this visual novel sounds great! I love the theme of it, your art is excellent and it sounds like it will have a lot of variation.

@AlexKey Thanks for the hearty welcome!!! This post has been a while in the making, glad it can impress!!

@Koloss Aww your compliments are too much!!! Yea lots of variation here, I’m just now noticing I forgot to mention a bit of magic too

I think it will have a good mix for everyone. The difference of play through as a feeder, a glutoness-feedee, or a soon-to-be feedee fruitlessly resisting

will really spice things up!

wheres the guy with the prequel meme? This shit is promising!!!

Do you have other artists working on this now? I’ve looked through your gallery and a lot of your work is very obviously traced.

Been reading your comic for a little while, Surprised to see it evolve this much in such a short amount of time. Keep up the good work.

As a long-time fan on Deviantart and Twitter, I am so pumped to see this visual novel come to life! Welcome to the world of game development Yummy!

Woah, you’re planing on making this awesome comic into a game?! We’re in June it’s too soon for Christmas

@Grimimic I’ve worked with quite a few artists to get the perfect mix together that’s working with me now on the comic in color and the game. It’s not easy to find artists to work with long-term, quality, and both skilled and willing to draw BBWs. I have cut off working with many due to these sort of issues. It’s a very hard problem I have to manage always whenever receiving work from another. It’s only recently that I’m confident I assembled the right team. I haven’t deleted off older works from those past artists as regardless they’re enjoyed art and I wouldn’t want to contribute to the disappearing of past art. This is something I’ve recently become very vigilant for when putting together the current team as I’ve been burned before.

This project looks top notch. It honestly makes my head spin what will just be posted here in a day sometimes.

I wish you the best of luck!

@Muffintopmanor1 AHHHH Muffin!!! I’m so pumped too. I always think of your old comment about just wanting some simple romance

Me too me too, I can finally have that be an option in the visual novel. Just need to keep Amelia out of the way

@FallenKing107 I love to hear from the comic enjoyers!!! Thank you so much!!

@The_Stranger Hahaha did I over prepare?

I did see a small post about this on DA, good thing you’ve made a post here as there’s no doubt plenty of people here to give advice or to offer assistance.

I hope you’re successful in making this, the comic itself is fun to read and it shows a ton of promise. Good luck!