Oh yes, I should do that.

Is “having a link directing to a Pixiv page” the same as “hosting it”?

We cannot link to it or host it. We wouldn’t be able to have any access to it.

How would I DM you? I’m not entirely sure how to do that

If you click on my name you will see a message button in the card that comes up.

So … I made a translation of this game and fixed some of the issues like 6 months ago, but I forgot to upload it here, so here it is.
Better late than never.
WG Academy v0.2 translation

As someone who loved this game, was sad to see it fade and at the glitches/poor english of the og, I salute you good sir

two new bugs with this version:

I get this message even tho I just started playing this game and my mission was to go to WG Academy. Any help? 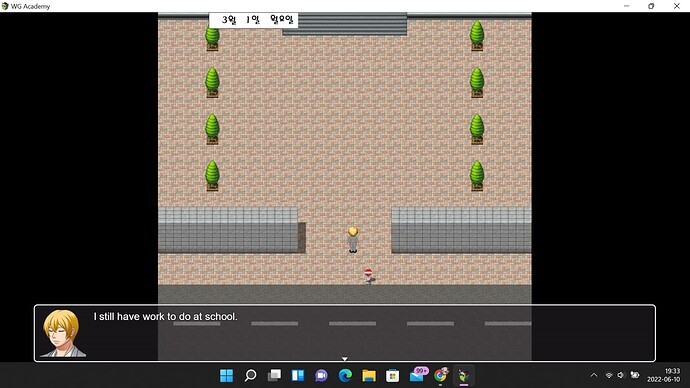 This game urgently needs a rewrite or it will be taken down. They make the player a 19-year-old going to school, so it’s clear they wanted you to be an adult, which is good, but then randomly at least 1 of the girls in the school is FUCKING FIFTEEN BRO. We can’t be doing this. This game is gonna get nuked off WG if the admins ever notice this. Idc if it disrespects the original writer, if you like this game, rewrite it and change the ages.

The admins are aware of this game as the age issue was brought up previously in this thread. @Hanogi (the developer) had stated they were planning on changing the ages of characters in game. Obviously it wasn’t the developer who linked this game originally.

oh good okay, sorry, I was just very caught off-guard. It’s against the rules, but I get age differences a bit across cultures, even if I disagree, but 15 was just… genuinely upsetting.

Hanogi is a Korean developer I believe the so age of consent is obviously different. And they planned on making an English version of the script and releasing it at a later date.

They were unaware of the U.S. age of consent differences. And told that to be hosted on the site the age would have to change. So I think that’s where it left off.

Korea actually has a higher age of consent than the US and Japan for the most part is effectively 18. The thing is when it comes to fictional contend the US, Japan, and South Korea do not prosecute that type of content which is why its seen in many types of media such as comics, animation, and other forms of fictional media not using real people or actual minors

To clarify, yes the only reason the post is still up is the dev did confirm with us their intent to localize and change the ages in the game in the English version to comply with US law so we are treating this more like a localization project atm.

And a quick correction to @nervki statement, in the US it has actually been prosecuted successfully twice in the cases against both Dwight Whorley and Christopher Handley which involved manga depicting minors. Just because it is not prosecuted often does not mean its not prosecuted.