I finished a fetish game in 72 hours (plus an extra day for quality of life updates), and just in time for Christmas! 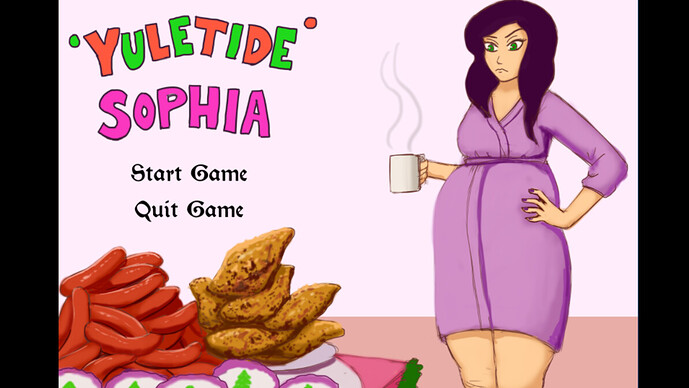 Christmas! Time to chow down!

Download based for PC and Mac only for now.

I just got through playing it and I must say very great job, Hexalt! I had fun playing it!

Fun game, but as someone who actually plays tetris, the pieces rotate in a different way from normal, so I ended up messing my combos

Other than that, nice job!

That was a lot of fun!

This needs some way to keep the RNG from doing stuff like giving you the same piece 10 times in a row. Like it needs to force a game to pick a different piece after the third time. Same with it NOT giving you a particular piece for the next 20 pieces.

Simple, but fun. One thing I wanna note: in Tetris, you get to know what block comes next so you can plan your moves ahead of time. Here, though, you don’t get any hints, which can be frustrating when you’re trying to be as efficient as possible.

Looks good. Too bad im pretty bad at Tetris? Is there anyway for you to maybe make the game easier for someone like me?

You can look at the food Sophia is holding to get an indicator of which block is coming next.

Yes! Try clicking on the pile of sausages in the title menu.

I had a great time playing! I played the Mac version, and I feel the screen is cut off a little on the left side when you check to see the food. I had a hard time reading the text of what Sophia was saying about how much food was left. Other than that it was really fun, and the art was lovely!

Thank you! That made it a lot easier haha

Thank you! Sorry about the issues with the version you had. I run Windows so getting the Mac version to work was a bit of a crapshoot since I had no way to test it on my end. I’ll have to keep things like that in mind for future updates/games.

EDIT: deleted and downloaded a fresh copy and it works now. not sure what went wrong the first time.

So, after getting around my technical issues, I found it quite fun. I managed to beat the game in both normal and ‘weenie’ modes, and while the normal mode was fun from a gameplay perspective, I found I never had time to look over at the art, which was a bit sad. In ‘weenie’ mode, however, while the gameplay was boringly easy, it gave me time to actually watch her grow in size. In fact, in one ‘weenie’ playthrough, I specifically set things up so that it would essentially auto-play itself for 12 servings in a row so I could watch her gain weight.

Now, as for the art itself, it is quite good, but combined with the gameplay it feels a bit one-dimensional. The only change in her appearance is when you gain weight by clearing the row(s). I was almost expecting for her to have a different change as the game-space got more filled, simulating a more stuffed belly, while clearing rows would transition to a more fatty appearance. That said, given the relatively short time spent on the game, including the art, it is still an impressive amount of work, given the number of different weight levels.

Overall, a very good game for the amount of time spent on it.

as someone that plays tetris a lot the game does break some of the good practices of tetris games.

the piece colors are too similar to each other making it harder to tell what is coming up next as well (S and Z could look more distinct). it’s a bit harder to fix since most foods have the same-ish colors. also the box being purple messed with me since the T is usually purple ;-;

the pieces in modern tetris are not just random. it takes one of each piece and randomize the order of them (like shuffling a 7 card deck). so after 7 pieces you are guaranteed to get an I piece for example

the game should probably have a counter for how many lines you have cleared out of x (or pieces eaten if that is what it tracks) to win. it was a bit jarring that I reached the goal without knowing how close I was.
that the game doesn’t have an endless mode was a bit disappointing 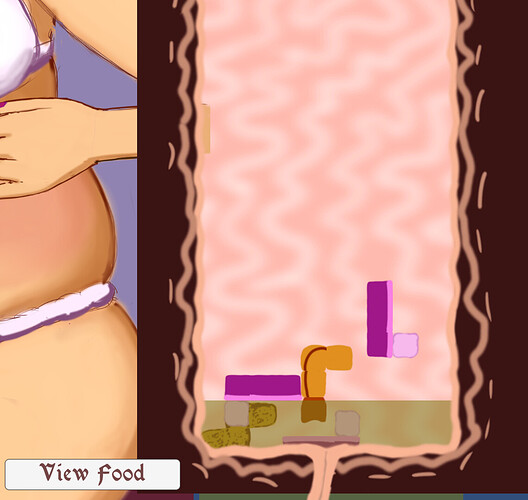 There is a counter of how many pieces of food you have eaten. You can hit space to see the total, or you can hit P to see the number of types of food you’ve eaten. 120 is the victory number I believe, but you can tell how close you are by Sophia’s commentary on how much she has eaten.

And yeah, I was aware of the bug with the misalignment. You can really mess it up if you hit W and up repeatedly. I may fix that in a future update, for now I just recommend not doing that unless you want to restart.

sounds like a problem with your virus scanner. Nothing much we can do about it on our end. I can guarantee it’s a false positive, though.

ok i think i now know how to fix it thanks

Longtime Deviantart follower, so I was pleasantly surprised to see you here! Downloading it now and seeing what’s what!