What if someone set up a Discord server, and there were different text channels for different locations in the game? Like a town made of chat rooms! So there could be a tavern (because every RPG needs a tavern!) and some users could be given the tavern-keeper role so that they can act as moderators while everyone else hangs out. Or a bakery channel, and there the bakers can post pictures of cakes and eclairs! And if we were feeling adventurous, we could use that place as sort of a hub for people who want to play with those weight gain rules for TTRPGs! The tavernkeepers could give quests and dungeon masters could lead adventuring parties as various DMPCs. Maybe we could keep track of everyone’s loot, too!

That sounds really good! Message me when it gets set up

I would be interested. Would there be any specific rule set used? Setting up a temporary dungeon type event could be fun although a bit of a headache.

I think that would be a decent idea. The ttrpg aspect though would be a lot more complicated to pull-off.

Something similar has been done using discord bots, While not Weight Gain focused it is a full on MMO using a discord server. I haven’t fully watched the live stream of it but this might be interesting to you. 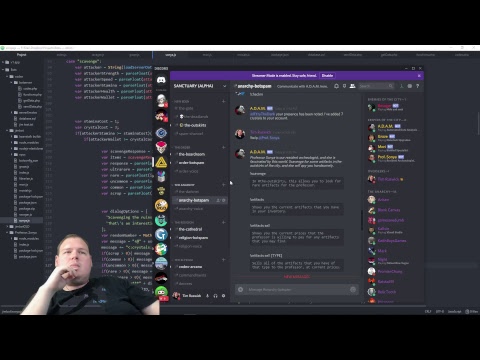 Thanks for this! I was actually thinking about using bots to help with keeping records and stuff, and I got it into my head that a weight gain Discord bot would be pretty cool!

I’ll check out the video when I have seven hours to burn, haha~

Hey… Have you tried out this server? There’s already a weight game themed RP Discord server at Discord. Check it out.

Hmmhmm, well, any good role-playing game system has enough structure to settle arguments, like, “Does the goblin kill me before I can cast my spell?” But it’s gotta have flexibility, too! You don’t want systems to get in the way of fun, and so making someone move to a different room in the Discord server every time they went to the kitchen’s storage closet would be pretty silly~

Role-playing is about telling a story with other people sharing the stage. At some point, you just have to trust one another to role-play faithfully! If being upstairs in the tavern is a big deal, then faithful players will act as if they were upstairs, even if there’s only one channel for the tavern.

Having separate rooms for separate locations is mostly just a thematic thing, you know? At least in my head~ But of course if it seems like making the separate locations be more split up would be useful, well, you can always make more rooms!

As for the question about the ruleset, when I first posted this I figured it would be nice for it to be an open style of role-play in general. Then, when specific things happened like someone wanting to go out on a quest with other people on the server, we could break out the rule-books like ExpanD&D or Shadow-Waddle and use whichever one seems appropriate.

The most important part though would be making up a setting! Hanging out in a tavern is one thing, but if you ever want to leave the tavern or (gasp!) talk about stuff besides the tavern, well, there needs to be canon that people agree on!

As I’m writing this, I see @Tag365’s comment, and I’m scanning through that server’s logs. I’ll write a response to you soon!

Edit for @Tag365:
Okay! So I read through some of the channels in that server, and it looks like the RP parts were for having actual D&D games with weight gain expansions, am I right?

In that case, I think the server I was imagining would be a bit closer to Sanctuary, the server in the video @grotlover2 shared . . . but with less . . . mechanics? Something cool with Sanctuary is that there’s a persistent world, and the players are fighting over this thing called the Codex, and there’s a channel called the Deadlands, which is the combat zone where they farm for points to win the Codex with. It looks pretty interesting!

But as I was saying, in reply to @Anonhugger as well, I’m imagining more of an MMO’s safe-zone, like a town where players hang out. The TTRPG part would weave through the city and maybe go out “beyond the walls,” but not everyone would have to take part in the game if they didn’t want to. So I’m imagining a scenario where a group of players meets up in the tavern channel to form a party for their TTRPG session. And if one of them suddenly starts a bar fight, then other people in the channel could either get involved like NPCs usually do in games, even if they weren’t part of the party originally, or they could just leave and go to the Bakery to continue their own role-play. Maybe it would be too disruptive and it would get annoying, but I guess keeping it under control would be part of the GMs challenge!

I agree with @echo_tine that setting is important. Even just loosely drawn in, or at least acknowledged. Something that’s worked for me is designing a specific town, saying there’s a crown prince and town guard, and then telling everyone to let me know if their character has backstory about a setting. I would keep track of the collective world building everyone brought to the table, and eventually drew up a map and asked people to place their hometowns on it! It was a very fun project, and it was nice to show everyone the fruits of what we were creating as a group. Events should happen on at least a monthly basis, so the characters have something to talk about so far as current events go. Having quests, or a job board would also be fun. I’ve run a lot of chat based RP groups on DeviantArt (I know, I know) and think that there should probably be a team of at least two admins in charge of some basic worldbuilding so everyone is on the same page for what sort of power standard we’d be setting for a project like this.

This problem is quite easily solved by having an OOC room. If you see an RP going on in a room you’re interested in and can’t figure out where exactly they are within the establishment, you could just tag one of the players and ask. Most people are happy to include more people in the RP and will take a moment to explain the context and even idea bounce an excuse for the new character to enter the scene.

I love the idea of this, either pure roleplaying or a structured tabletop RPG centered around fats or other kinks would be grand. Play-by-post is a good format so no one’s locked down by needing to devote active hours and hours to sitting there and talking, but “DOING IT LIVE!” is a good format no matter what if you can manage it. Sad that the one discord link expired though, was gonna check it out.

This sounds awesome. Whether it’s just RP, or an actual RPG, I’d love to be part of this. And the idea of different chat rooms being different hubs or locations in the town would mean that tons of people can join without it necesarily slowing things down.

That’s true. Though if I were to set it up myself it’d be smaller, like D&D party-sized or maybe a max of ten people, especially if it were more in the vein of actually being a group tabletop. I could see just a massive group RP getting wild, with lots of bone-zone stuff needing to be taken to DMs or some erotica room so it doesn’t clog up the other areas, it’d be weird.

IF this were to become an actual RPG, what system would you use? Out of curiosity.

@GlobularGoblin
You’re right about the risk! Making people feel comfortable in the server would be one of the top priorities, and it would be made extra hard because I’ve never seen anything like this done right. A red light district (which we could set up via the Discord categories) might help, and obviously consequences for inappropriate behavior in the wrong channels would help a lot too. But first we’d have to try, and I hope it would go well~

@Rabidname
I’m a big fan of D&D5E, because it feels way more streamlined. And ExpanD&D has heaps of different archetypes that look fun in a fantasy setting, which is what my vision for this would be. And I think you got the idea behind the locations! I really would like the world to feel alive even between adventures, and making this town be persistent and populated is a huge component of that.

But all of this is still just talking and ideas; school is a ton of fun and a ton of work! Maybe I’ll get something concrete started over Thanksgiving week in the spirit of plenty~

I do really want to hear your thoughts though!

I’d have SEVERAL systems I’d want to run something like this in, it’d be a hard choice for me if I ended up running a thing. And yeah I’ve never seen a group RP/online tabletop game run without hiccups yet.

I myself am pretty experienced with D&D 3.5, but I have played one session of 5e, and wouldn’t mind playing more of it. Especially since the only weightgain related supplement (albeit nonofficial) that I know of, that being the one you yourself have mentioned, is meant for 5e.

I would, of course, be willing to learn a new system as well- But those are the two I am most familiar with as of now.

I feel like 5e is super streamlined compared to 4e and Pathfinder; usually I feel like we’re spending less time rolling and more time RPing. It always helps that it’s still being updated, too, and lots of people who are just getting into TTRPGs will be learning 5e because that’s what they’ve been exposed to.

The more I think about it, the more I feel like sticking to one system should be encouraged with a server like this. Letting players just use whatever they want might appeal to a larger group, but eventually it could split the community along lines of who knows which systems, which is totally against what I think this server would be about! But then you go back to the problem of scaring off players who don’t use whichever main system we choose!

I guess in the end what matters is making a really interesting world, interesting enough to make people feel like it’s worth learning a new system. And world building is fun!

It seems we agree on pretty much everything, then.

Is there anything you’d want help with before this can get started? Really hyped.