Adamantite heart is a time rush mining game about a dwarf named Hellia.
A dwarven adventurer that lived in solitude after retiring from adventuring.
But now the other dwarfs call for her aid. To dwell into a dangerous mine shrouded by a poisonous miasma, were ore magically changes and monsters roam.
Your mission is to find the source of the miasma and rid the mine of it.

Other credits—
Yanfly: Yep_EventChaseplayer, Yep_TimerControl
Grimimic: Imp and goblin templets used to sprite imps and gobs.
Coldsteelj: Body templete I used to make the big body for the slime girls.
Rpg maker mv: I made it in this thing.

Failed to load Vehicle.png, are you sure you did this correctly?

Fixed the problem. I took out some of the base stuff from rpg maker that was unused but vehicle.png was apparently important even though I don’t use it anywhere in the game…

While the gameplay and spritework are fine, it feels a little hollow when we have no way to gain weight ourselves. It’s not even obvious from the start what causes NPCs to gain weight, either; and tying it to upgrades doesn’t make a lot of sense.

This game was amazing! A sweet dungeon crawler with an awesome boss fight~

Why did you have to end it on that!? I want to know what that was, argh! xD

saw a misplaced adamantite ore on my playthrough, and I can’t collect it 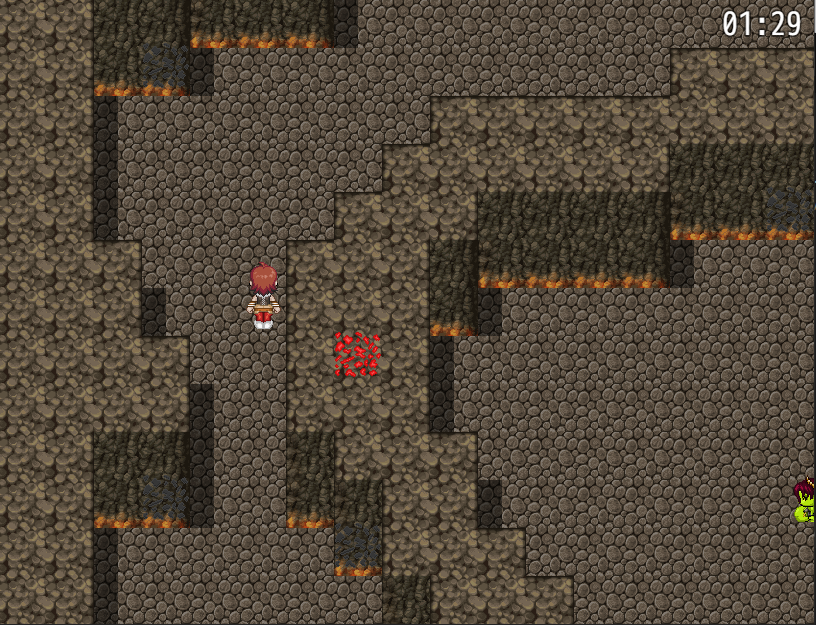 My bad, I created the event there and forgot to remove it after placing a bunch of it at other places.

I’m not very far in (I haven’t even seen what causes weight gain to happen yet) but I love this core mechanic and already feel like thsi is something I’d love to see taken forward and given further polish after the jam!

Man this game is fantastic! Well done on making a game with a full loop all the way to a satisfying conclusion! I was not expecting the boss battle at the end, but I was apparently ready for it! lol Really really well done, you deserve to do really well! If I had to have a tiny complaint it’s that the mythril boots make the character a little hard to control, but honestly that is just a nitpick. It took me a little bit to understand the game’s concepts fully, but once I got the hang of them it was nice and easy to progress

Good luck in the competition!

Fianlly played a complete run of this! It’s absolutely wonderful! The sense of progession is so palpable and satisfying, I think it’s going to do super well with the judges.
Honestly I’d love to get involved somehow if you take this project further :v

I’m also happy how it turned out.
I managed to get everything I had thought out into game.
I’m not really sure what else there is to do.
And if I do decide to work on it again it probably wont be for a while.

An interesting game that gives me flashbacks to when I used to play MotherLoad on MiniClip. The time limit was challenging but not unfair and the focus on out maneuvering the enemies was fun. The progression of the upgrades also felt good without it feeling too grindy resulting in a short, but fun experience. My major complaint is that the fetish elements felt like they were just tacked on just so they could be there. It was interesting that you could send meals into the mines to fatten up the enemies to help slow them down, but this was not very well explained so I did not make use of it till late into the game when I figured it out. When you get down to it the weight gain could have been removed and it would not have really changed the game much since it was tied heavily mechanically to story wise to the game. That being said it is still a damn fine game and an interesting use of the rpg maker engine.

This was a hard one, because I actually really like the concept of the game. I was a huge fan of Motherload back in the day, and this one definitely reminds me of it. I really liked how you could cause the enemies to get heavier (and thus slower) to give yourself an advantage, and the overall game loop was a decent combination of anxious mining and then getting to pour over how much loot you grabbed. That being said, there were many missteps in my opinion. One, the speed upgrade felt almost like a downgrade, I could barely control it. Two, the economy needs some fixing. The trade mechanic could probably just be removed, since the exchange rate is so low. Also, if you’re like me, you mined out a lot of the starting area before trying to get any upgrades, but that ultimately screws you over since you didn’t have the efficiency from the upgrades, but now the nodes won’t refresh (except for a few here and there). Also, the fetish element seemed more or less slapped on, more could have definitely been done with it. Overall, I loved the concept, enjoyed playing the game, but I think there’s a lot that could be improved on.

This was a really interesting take on the RPGmaker formula. You don’t bog the game down with random battles, instead opting to simply work with a timer. It’s a test of a person’s ability to remember locations and to navigate quickly through a maze while avoiding enemies. I especially liked how you included the enemy time reduction mechanic to create a bossfight. I think my biggest feedback/criticism would be that the weight gain content seems a bit tacked on. It’s somewhat related to the game but for the most part it is it’s own separate thing that just progresses as you make progress in the mine. Maybe in the future you can work it more into the primary gameplay. Buying food with your mined resources to give to the girls individually, or maybe instead of food simply fattening all the enemies, 1 unit of food could protect against one attack (and fatten the enemy who attacked you. Something like that. Regardless I was engaged the whole time as I tried to figure out the best paths to run through to get the resources to upgrade my stuff. Even though my fingers now hurt, I really liked this project.