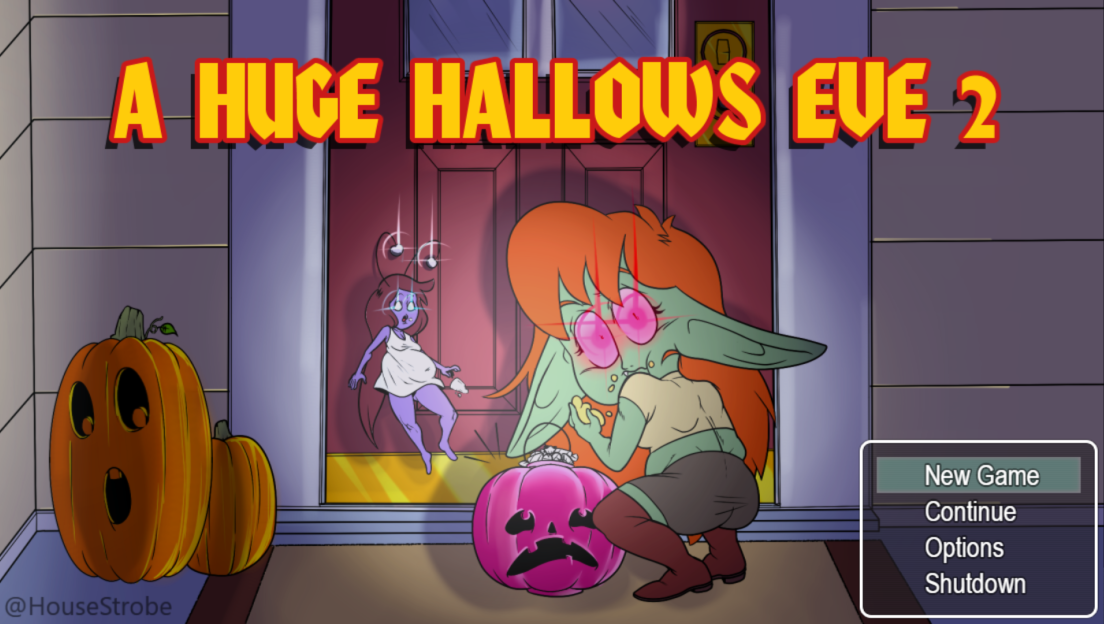 Grimimic and UrgUrgUrg collaborate once again to bring you another Halloween treat! 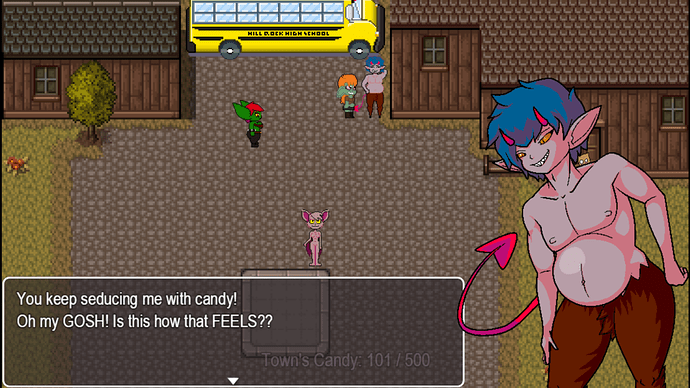 Play as Gong or Fizzy as you quest across the world of humans to save your best friend and get a bunch of cute monster people stuffed fulla candy while doing it! 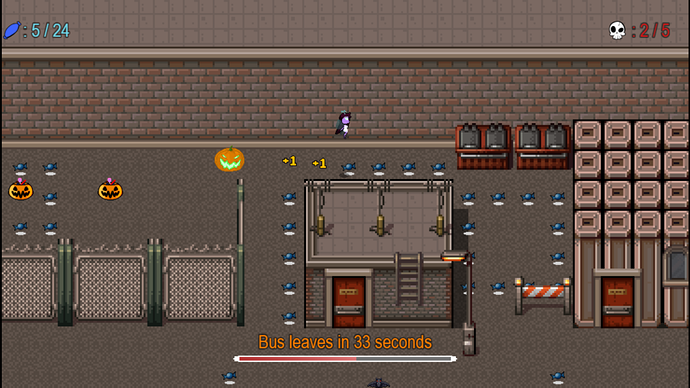 How do I play?

Collect candy, use that candy to buy upgrades. Upgrades help you get more candy. We were very inspired by the gameplay loop inEmmet’s Anamantite Heart (we also recruited him to do a bunch of mapping!)

Is this a sequel?

Writing duties were split between Grim and Urg.

Grim drew all the portrait and cutscene art and the candy and store items, Urg mostly focused on making sprites for the NPCs (though Grim helped out with that a lot too)

Emett did three great maps for us.

The sick titlescreen art was by StrobeHouse over on Twitter and DeviantArt. Don’t sleep on checking out their work!

What is this, a crossover episode?

It is! Characters from Grim’s previous games The True Meaning Of Foodmas and A Gropesmas appear to delight and amuse you (and extort you for candy)

Cool game. Im glad I could help you guys out with it a tiny bit.

The deal with candy being used for upgrades to get more candy reminds me of Costume Quest.

I love it i just love the characters and artwork

Just finished it, what a fun gameplay loop! I will say that you start out a LITTLE slow but after the first upgrade, it’s smooth sailing. You have the fun of slowly upgrading your abilities after every run, and ALSO making everyone fat after every run. I bought all the upgrades and got 500 candy, is there anything secret I missed? I noticed you could keep filling the treasury, do you get anything for that?

This is easily your strongest release so far. The writing, humor and characterization continue to be bleeding-edge, and this is easily the most game-y title you’ve made. I just wish that the current rotation was expanded (pun intended), since it’s really addicting as it is.

Thank you very much for this!

We actually had to cut two characters from the cast to get done on time. Calcine the demon girl from foodsmas, and a gremlin who was supposed to be the bus driver.

So, after breaking the 250 treasury limit, I can’t seem to talk to the bat anymore.

I just now read how stressful the development was for ya’ll, and my previous comment now just feels incredibly tactless.

brooo im mad stupid and i got attached to Incu… also i cant get to the end :’(
please tell me he gets a happy ending

well this was a really fun gameplay loop!

I’l say that you two did a great job!
I’m was asking myself what events you used to generate the candy spawn, but in the end, i realise that this really only used fonctions that i knew about, well almost.

Regardless, i enjoyed it, i went for speed asap and did not focus on bonus time, but i can understand how it would affect a player who did not try to become sonic.

Have a wonderful end of the year!

do you intend to put the two characters that were removed ??

I’m definitely going to push for us using Calcine THIS year!

Personally I find the incubus the best but I prefer the male form.

All of them were good.
Although, I have to wonder what the game style will be for the third one.
First was a runner, of sorts, and the second was a timed item hunt.
Also, how far things will go in the next update, we only got to stuffed, and moderately fat, but we know that we can go ludicrous like with our goblin and fairy cuties.