exactly what I meant!! (I mostly just want to see a working planet mode…)

I don’t think anyone would go out of their way to get perms to remake. Ppl might ignore the try getting permission part because they fell off the face of the internet, right?

I guess you could do that if your stance is that you can do whatever you want with someone’s work because they stopped posting.

The creator of Boundless also created two other games in the same ballpark. The names are “Spiteful Fatty” and “Miragin X” if I remember right. Same world, but a bit more narrative story telling. Anyone have links to either of those two games?
This might be slightly off topic, but I thought it would fit the thread. Sorry if I’m breaking any rules.

i think with situations like this its really on the edge.
on one hand, yeah dont mess with it out of respect to the creator. cause if they were to suddenly come back one day and find that people messed with their project they may or may not understand but would likely be a little upset either way.
on the other hand, there are a few bugs that need ironing out, and the complete disappearance of the devs make them otherwise impossible to fix if the game isnt tampered with. for example ive run into a bug twice that breaks the overall weight counter because one of the other weight stats broke, with the only fix being to reset your body through the cheat menu and then use the blubber bomb several times to get back to your original weight.

i should also add that tampering with the game may involve legal trouble
https://venturega.me/index.php/2018/03/15/what-now-a-boundless-4ce-post-mortem-and-a-look-ahead/
so if someone would want to mess with it further you would probably want to rewrite the whole setting EVERYTHING so that it cant be seen as a derivative of leupai’s work in any way, even if he has disappeared off of the internet because he could just come back at any moment and slap you with copyright.
that or remove any “adult content”, which considering the whole fat/expansion fetish aspect we cant really draw a clear line on what is and isnt considered adult content.

the problem is the copyright, it definitely covers both boundless and the setting. so you need to make the whole game from scratch and rewrite everything in a new setting, because due to the site’s intent there is absolutely no way to worm out of leupai getting mad.
but at that point the person doing all that would likely want to make a original project instead.

Is there a guide of some sorts other than the wiki? I want to learn how to get the shrine characters to be more favorable twords my character but the wiki has no information about what I should do to gain favoritism.

Don’t think so! You can get favor by cheating or offering certain items. 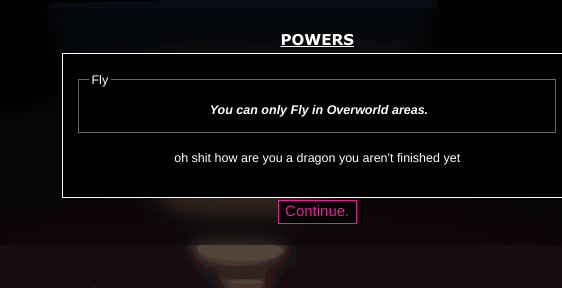 anyone else find this? (i was a dragon mythosi)

Been meaning to ask but I keep forgetting; do the shrines actually do anything? And if so how do you get them to act?