Hey everybody! I actually updated the game to a version that isn’t flash and is therefore playable! 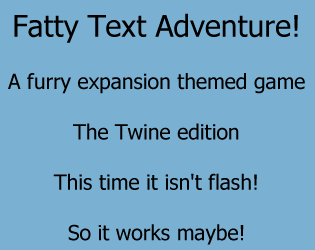 For those who haven’t played it before, it’s a (largely) text-based furry adventure RPG with a lot of weight gain/stuffing/vore/inflation content. Most of which was submitted by members of the community and then programmed by me. And technically you can make your character human during character creation, although the rest of the game is solidly furry.

It was first posted about 10 years ago, then I slowly went insane and stopped updating it, then flash died, and now the game’s back! In Twine form! Which is just so so much better than flash was. I could not stand flash.

It still has a lot of bugs, what with reprogramming the entire game and all. Also it had a lot of bugs before, which doesn’t help. But I think it’s relatively stable at this point…? If you find any errors, please let me know. There’s still a lot of ui stuff I’m trying to figure out, and there’s a number of quality of life systems I want to add in. But it should be functional at least, theoretically.

And feedback would be greatly appreciated! Thank you for your time.

Hey, its great to see you on the site. I’ve always considered this to be a hallmark game that was basically the beginning of the explosion of WG-related games on the net, no doubt being the inspiration for many of them.

Excellent to see it was not lost with the death of Flash.

Thank you so very much! I’m not sure how much credit I can take, but I’m extremely flattered by anybody who felt inspired the game! I’ve definitely been very excited to see the growth of wg games over the past several years as well.

And I’m very glad I was finally able to bring the game back!

Excellent! I used to love this game but haven’t played it since it stopped updating.
I have high hopes for it!

Big fan! I go back to your stuff often.
Glad to see you here.

But now, to see it being converted to twine is amazing! I learned twine a few months ago and I simply adore it. Similar to what Kilif said, your project is definitely something I will always aspire and look up to (Heck, I put an easter egg/nod to it in mine haha).

So honestly if anything, since it’s better late then never-

Thank you so much! I think I actually played your game for a little while and definitely enjoyed it. I’m glad I could help inspire you

honestly, i’ve played the game multiple times, even with an offline standalone flash player, can’t wait see to what you have in store for this now that it’s converted to twine

Not to ruin the celebration but I’ve already found a pretty big glitch, if you use the stretchy fruit and get stuffed and when the effect wears off you reach zero health cause of overstuffing, what happens is the game treats you like you’re in a dying state but doesn’t play the event for it, not a huge deal until I realized that the inventory button was gone and I couldn’t enter the restaurant

Yeah I had same issue, only went away when I got into a fight and I had to accept being defeated

Other than that, enjoying this so far

Hmmmm, I thought I fixed that, sorry. I’ll have to look into that further. Although at a minimum it should reset next time you actually are defeated. Thank you for the report!

honestly, i will admit, it’s been a while since i played the flash version, which i’m playing this version right now, and i forgot that you need so much agility to get more money from working at the restaurant, or is that not in the twine version yet?

Well, you need 35 agility and endurance for dishwashing, and you need 45 agility and intelligence for cooking food, so that’s probably part of it. But yeah, it works exactly the same way in the flash version.

oh okay, thanks, i forgot about the intelligence part, i like how it shows the stat increases now btw

which i’m just checking, but the armory is 50 strength to work, right?

Great to see this game making a return, seeing as it’s one of my personal favorite WG games of all time.

Oh my god am i glad to see this amazing game return.

Wait… this isn’t a dream? This is real life…
This post has certainly made my day…

Echoing what’s been mentioned prior, but your game at the time was a highly entertaining and seminal work that set a high benchmark for subsequent flash RPGs from that moment on - imitation being the sincerest form of flattery as they say. Certainly among the older crowd, there isn’t one of us who doesn’t think fondly of your game or couldn’t cite it as inspiration for one of their own projects.

It’s an honour to have you grace the community, noone!