As a whole, there hasn’t been a new release of the Fetish Master engine for ages - the in-progress 0.99 code was uploaded to GitGud back in 2017, and the last full release in version 0.985d was over six years ago. The git version has engine changes that break a number of mods, and some half-implemented features left some core functionality flat-out broken.

If you scroll through the Fetish Master subforum, you’ll see that I’ve already got my own version of 0.99 well underway, with a number of new features and bug fixes, but it also breaks mod support even further in some instances. It’s not a great base for people who want a stable install of every mod they can get their hands on.

Instead, I’ve put together this ‘Legacy Edition’ - a version of 0.99 that should support all the mods that worked on 0.98, while adding some of the bugfixes from newer releases, all tested to work with newer versions of Java than what the original game supported. As a bonus, this version includes a slight graphical overhaul and optional dark mode toggle by implementing FlatLaf theming. A rundown of major changes can be found below.

Downloads
FM Legacy Core (v03) - This zip contains only the dist folder, for people who want to drop it into an existing installation.

FM Legacy Full (v03) - This zip contains a full version of the game based on 0.985e, with the updated engine installed. No other mods have been installed.

You can view the source code for this release here.

As always, if something goes horribly wrong, just let me know and I’ll see what I screwed up this time.

@Loner29 This might be what you’re after, assuming you’re running a recent version of Java.

Also, dark mode players might want to delete empty_background.jpg from the gamedata/img folder, so that the game isn’t rendering a big, brightly-colored box whenever it can’t find an image.

Oh my god. Thank you for never forgetting about this weird and wonderful game

I’m really glad you made this! 0.99 has a lot of nice features and runs much faster but the amount of mods it broke made it a hard pill to swallow. It sounds like this will let us enjoy the best of both worlds, 0.99 features with support for 0.985 mods. I only wish the FM community was larger so more people could appreciate all the work you have been putting into all of your FM projects.

Now I just need to figure out what mods I want to install and give it another run.

THAT RIGHT THERE IS WHY YOU’RE THE BEST BOSS

I’m so glad this game keeps getting fan support, many thanks and blessings for bestowing this upon us

This version has 0.99’s bugfixes, not 0.99’s features (aside from what’s listed in the OP like if you consider proper mergedown a feature and not a bug fix). I believe the content is still based on 0.985e

It’s a bit of both, really. All of the engine code h.coder added to 0.99 is still there, so you get the neat management stuff like being able to see when proxies are away, setting nicknames, and the option for a proxy to use items directly from the house storage. Even the hardcoded organs are still there, it’s just that the game will only use them if there aren’t matching organs in the gamedata folder.

Actual game content hasn’t been updated from 0.98’s last patch; the stuff committed for 0.99 was largely unfinished, broken, or inconsequential enough that I didn’t worry about it; mostly, that amounts to setting up a matron at the house, plus a new job in the red light district that needed some tweaking to go past the intro and didn’t really have much content.

So what would i have to do to make my new mod (which edits some organs extensively) work with the hardcoded organs?

Depends on what you want to do.

If you just want your stuff to work, thow your organs in the organs folder as usual and the game should use them instead of the hardcoded stuff (and if it doesn’t, I screwed something up).

If you want the speed boost from having your organs hardcoded, you could send them to me and I could do a compiled build with them, but that gets back to the standard 0.99 problem - people have to be using that JAR for the hardcoded organs to work, and either it’s usual 0.99 behavior where no one can overwrite those organs, or the behavior of this build where a stray overwrite from another mod will take priority over the hardcoded organs here. Since a lot of mods aren’t going to be compatible out-of-the-box with your overhaul I suppose it’s less of an issue than usual, though.

If you want to try hardcoding the organs yourself, it’s not that difficult; if people want one I can put together a quick how-to on compiling from scratch, which is rarely more difficult than unzipping the source → installing netbeans → having netbeans open the source folder as a project → pressing F11 to build, although there are some quirks that might pop up along the way. Editing the hardcoded organs is more or less the same as editing the organ files, just without the benefit of the engine’s built-in tags, and an extra layer of formally defining your code so that the Java compiler doesn’t throw a fit.

Yeah i only want it to work haha

I think i requested a few quality of life changes so I’m wondering if you added them in at some point?

Both those things would make modding easier

My only criticism of this fantastic edition: The code window for items is too narrow on my low res monitor. I tend to do quick edits to item script in the game so I appreciate having a good view

Alphabetizing the gene list probably wouldn’t be too much work. Resizable windows, slightly more complicated, but probably not too difficult.

I’m kind of at the mercy of Netbeans’ UI builder for interface stuff, which doesn’t always work the way I expect it to, so proper panel and button proportions are also a pain in the ass. I’m gonna keep on tinkering with it, at least. Some of the UI problems are less about resolution and more about how the form builder thinks I want the layout to work (I just realized while I was trying to work last night that the item windows were screwed up, and I haven’t even touched those specific forms), but I’ll try testing thing out in 720p, etc. as well.

There’s still (at least) on UI quirk I didn’t notice before uploading, in that the ‘return force’ textbox in the Gene Constructor clips down into the force multiplier box, but this shouldn’t really affect functionality and it wasn’t worth scrapping what I’d already uploaded.

EDIT: Fixed the Gene Constructor issue, made a couple other tweaks so that the time/priority boxes in the event and template editors are a bit more legible, plus a couple realignments of buttons or text strings. Download links have been updated.

so is this completely incompatible with maternal reads mod?

It should be almost completely compatible - just don’t use the dist folder from that mod, as it overwrites the game’s main file. The dist folder shouldn’t have been included anyways as it’s identical to the vanilla release. If you already have a modded game with maternal-reads’ mod installed, just overwrite the dist folder with the one from the fm-legacy-core.zip from the first post, preferably after making a backup of your game folder just in case.

Are you accepting contributions? 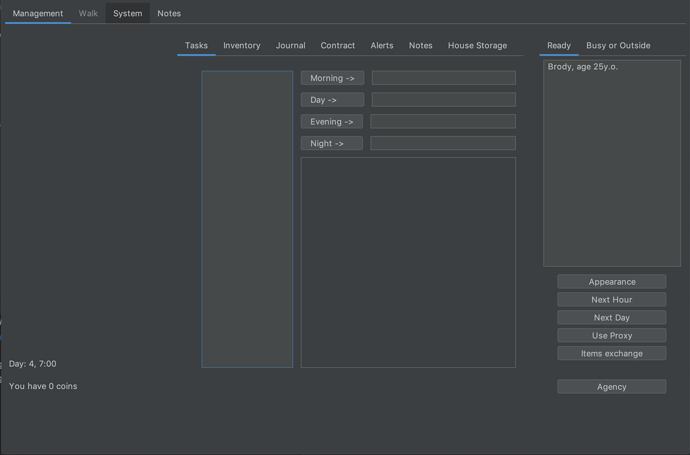 Are you accepting contributions?

I’m not sure how much I want this build to differ from the vanilla game, but I’m not going to turn anything down without consideration. If you’ve got something thought out or already coded, feel free to share here or send a pull request through git.

ive tried running this on multiple different java versions, all the things are blank and most of the buttons don’t do anything. there are no errors being thrown.

To do just about anything in the character management menu, you’ll need to actually select a character first. Click on Brody and see which options start working.