Grain to Gain: A Pseudo-3D Game 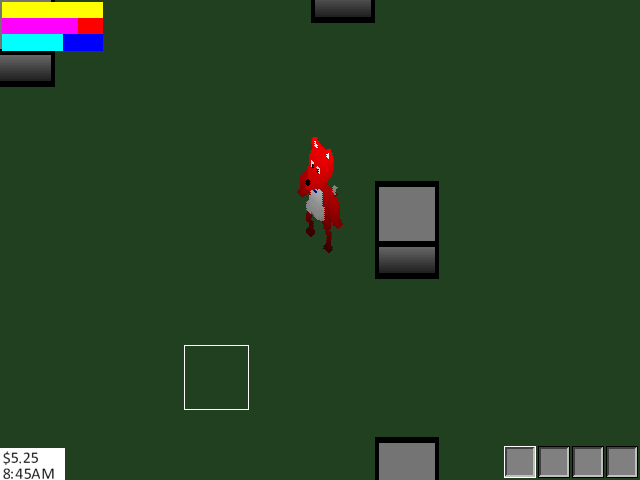 A game about growth in many ways

The game IS FREE! But you do have the option to donate which is very much appreciated. It currently supports WINDOWS and LINUX.

CURRENT VERSION: V0.2 Basically Something
It is currently a tech demo for the basics of the visuals and the simple controls. I now have a basic character creator layout, language support, and key binding saves implemented!

SYNOPSIS
This game was originally going to be a game that utilized ASCII graphics for visuals, but I went and decided to become more ambitious for a 2D style…Which then turned into a pseudo-3D style since I learned of some cool methods in some game jams I entered in. Mainly sprite stacking, and with a bit of elbow grease I can see to what limits I can push this method! Because who wouldn’t want to see their own character in a 3rd dimensional style?

CUSTOMIZATION
There is none…yet! I do aim to bring back the original species + a bit more customization. I’m aiming to start implementation of some basic customization in Version 0.3 since I did not deliver on Version 0.2!

NOTES
I know this seems like a drastic shift from the original game, but a new year and a new beginning seem to be appropriate for what kind of game I know Grain to Gain can be! But, I will let time tell the fate of this “overly ambitious” goal of mine!

Thank you for your time, have a nice and safe day!

that’s pretty neat, any particular reason you choose pseudo-3D or is it just because it’s cool?

I chose it because it was both cool and we hardly have any 3D-esque games here, despite this being a “fake” 3D. We have our 3D mods, but it would be a nice change of pace to see characters from different angles. I also picked doing this because it would make my game really stand out more and maybe obtain more interest.

I can see the resemblance now that you mention it! XP
I’ll be working on getting a better looking model hopefully in the near future, until then we got this little red “jinjo” as the player.

didn’t you do the 2D version?

The 3D-ish look is really cool and the path finder is working pretty good!

very interesting, can’t wait to see how this plays out

I like the style! Reminds me of the (very) old isometric games on the early 80s 8-bit micros. 3-D Ant Attack on the Sinclair Spectrum springs to mind

well this is only a tech demo at the moment, but it still looks like it would be pretty fun

Goal for next update:
The next update will be going into the player visuals. That’s right, it’ll be time to play with character customization bah-bee! This part will be both my artistic skills (creating the character resources) and my coding skills (telling the computer to render what part). So I do hope to get this out for you guys to test with in: Basically Me.

More detailed report
If you’d like to see me go into a bit more detail, come check out this Devlog here where you can also quickly download the files.

Thank you for your time, have a nice and safe day!

This looks exciting! I wish you all the best.

nice job getting this into a working version!
I’l give it a try soon

what things can get store in your inventory? (in the future)

Time for the block of responding to everyone’s comments.

@Legaciquiet @Tag365
I was going to make a 2D in which it’d play as a point and click kind of style, with a basic form of body rotation. But after seeing what “sprite stacking” was, I was like “THAT would be the coolest thing if I could execute it correctly.” So far I think I can do it, it’ll just be a lot of time in Magicavoxel that’s for sure! But to also clarify, the 2D was going to be a thing but I ditched it for a cooler thing that I think could be even more fun! (B3)

I mean it still uses some form of 2D which is why the game is being called pseudo-3D… Which come to think of is probably actual 3D since that is how things are rendered in a way… Still claiming pseudo-3D since it uses layers of sprites rather than a data sheet of multiple vertices and such.

@Korpsian
Thank you for the bug reports. I noticed the spazzing myself during play testing, and finally got it fixed in the recent update. The code failed to recognize the player being at the same location as the mouse, so I had to tell it that if it was close enough to the mouse to stop moving.

The diagonal movement may look or feel faster because of perspective, but I’m not sure how to test the speed actually. I’m using a new movement method from a tutorial that is just boss if you add a few more ifs to it. It maybe faster diagonally, but who knows

My current complaint about the path finding is that the player just looks silly sometimes while moving. And the path finding could be optimized better in my opinion since I just implemented a basic one. And Thank you, I think it’s coming out pretty cool too! (^w^)

@DarkShadowWulf
Thank you for giving it a try, I hope the next few updates will bring even more promise a prosperity!

@tiggertoo
That game looks interesting, I may need to see if I can emulate it sometime just to see how it plays. And I’m not sure what type of camera look this game would consider having, maybe third person?

@coleminatorr
Thank you, and Welcome to the site! It’s always nice to see new folk around these parts :3

@Exas4000
It’s still a tech demo currently, but the version does work as far as I know

@Prodo.2
Mainly food will be stored in the inventory, but I’m not sure how I should handle it fully just yet. Like if I should have a set size to the hotbar and hand wave it to hammer space (which it will partially do already) or have a larger inventory the player can swap items in and out of if they are wearing it (like a purse, fanny pack, and/or a backpack). And if hotbars should also be affected by what your wearing (minimum of 2, additional slots up to 10 if your wearing clothing with pockets).

Though for more possible items that the inventory could have which could also convey interesting story mechanics would be fishing equipment (you have to plan a day of fishing, and remembering your gear before heading out is important), farming tools and seeds (growing a garden in your yard can be work, but reaping those rewards are sweet!), and magical items (wands, books, and potions are great combinations for some esoteric phenomenal fun!

). These other items are getting WAY ahead of myself, but I did write them into my game’s document of features.

Thank you all for your responses and support! It’s very much appreciated! Have a nice and safe day!

The photos are hidden under

SCREEN SHOTS with the label > “Click to see how the game currently looks”. But I’ll post an update pic here for V0.2 since I finally have something visual to see.

The shading isn’t that amazing, but you can pick out more details of the character more than before. I’d like to work on some proper shaders but I’ll postpone that for a later update. I’ve been busy getting the keybinds to be more of a completed feature and just started on text input. Like, I somehow made text fields in GMS since you need to make them from scratch, and they are crazy more than what the player may need @_@

I’ve been hard at working gettin’ update V0.2 up, so here’s a progress image for ya’ll:

I’ll be working on getting a more finished model next, and then redoing the programming I did for the 360 turnstile I did in the gif to support drawing parts of a character. You may notice how it’s kind of not centered and it jumps a bit when your looking at the back, hopefully I can get that logic fixed when redoing it. But I’m happy that I got SOME kind of rotation turnstile implemented.

But what this progress means is that content creation and viewing will be much easier as everything will use 1 sprite source instead of multiple like I did in V0.1 (Having a top-down sprite and then a seperate front-back sprite). I hope this news excites ya’ll as much as it does me :3

Thank you for your time and support, have a nice and safe day!