Many of us liked her anyways though, its part of the charm lol

I actually like Carol’s arc quite a bit. She and the bartender are nice OCs

I’m sorry you dislike her so much but if the flashback is too long, I recommend pressing the Z button to advance the text.
That should help cut down the length.

I just wanted to give a quick update on the game. I’m still on hiatus until the end of this college semester, but I’ll be working on a small side project in the mean time to keep my skills somewhat sharp.

Don’t worry, this game will be nowhere near as technical or deep as LSE:R, the story and character won’t be as involved either. This game will be a pure, fat fetish fantasy.

In other words, it won’t detract from LSE:R’s development or become a main project.
It is shaping up to be one of the most down bad games on the forum, which is saying something.

I will make an official post regarding the game when it’s done-ish, but till then, know that I am working on something and that LSE:R will hopefully come out even better with this side game keeping me from getting rusty.

On a related note, I’m glad that the poll ended so positively!

I will be opening something for donations in the future, I just need to find a site that’s easy to use and isn’t too committal so people that can cancel their support whenever they want.

new to the game but enjoying it so far!

Though i am asking for help…

I’m kind of confused around what to do after getting the cactus. I assumed it was wandering around the slime cave, but even then, I’m not sure what i’m supposed to be doing exactly… can anyone offer some tips for a beginner?

The Cactus root can be found be going to the lowest levels of the Dampened Depths.
It’s very much a “Pokemon Mystery Dungeon excuse to explore the area” type deal.

Once you get the cactus you need to explore through the dungeon to find the Moss required. It’ll be at the bottom.
I misremembered which of the two items the Cactus root was.

Hey all, Dawn here.
I’ve been working intermittently on LSE:R doing little things here and there to help speed the process along.
The side project has been growing a bit bigger than I expected. It’s nowhere NEAR the size of LSE:R, but there’s already 12 different women with their own routes. The only major problem is the system I’m trying to produce to get this all to run smoothly.

Anyway, I do have something for LSE:R to share, Obese Hilda! 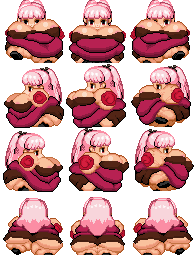 Please look forward to BOTH games in the future!
(And do not blame me if my side project awakens some new fetishes within you.)

nice man those sprite just get better. and cant wait for the next version of this and that new game. hope you get the system working smoothly.

I have a good idea for a extra content if you are interested in it.
It’s the bad end of Carol boss fight where you don’t choose to use Reflect and both Lysithea + Hilda become pigs for Carol, on the part Lysithea talk in her head that she have regret but don’t know why she feel it and decide to forget all then continue to be a pig the rest of her life but now instead of game over, we will now have two options on Lysithea wondering why she feel regret part that is remember and fight back or accept your fate.