I have an idea about a Beat-em-up game with superhero themes.

In Kentucky, there are several heroes who face evil, but this is not a normal story about a furry superhero, this is the story of Carol Cooper, the infamous Milkshaker.
Former thief dragon who became into a super heroine after being cursed by a Babylonian spirit after stealing a statuette lammasu and with several experiments with her sister to try to eliminate the curse.

She confronts criminals like a hybrid cow that has the ability to manipulate milk. All that since that spirit promised her that he would eliminate the curse if she did good things and that if she does bad things again, he will cancel the good ones, which is something difficult for Carol Cooper since it is difficult to leave her criminal tendencies.

Game plot:
Milkshaker every day tries to be a heroine despite the mocking she can get from the super heroic community part while she is trying to reassure her criminal impulses since she is always scolded by her sister.
All normal until she discovers that a villain was using Polar Corp technology, famous for the bizarre “Juice Corp” soldiers armed with potions that turn criminals into fruits to immobilize them and send them to prisons designed by them.
So Milkshaker first tried to talk to the other heroes but they never took her into account, so he will have to take office to unmask what is going on inside the corporation.

Milk Skills:
They are skills on which milk depends to be carried out but you have to be careful with the liters available inside the udders.
The normal way to recover milk is to wait 10 seconds to get about 5 liters of the 20 available in the beginning.
It is not recommended to not use the liters until the end because it can slow the character.

Power Ups:
Tools that will help the protagonist along the way but are limited and can only be achieved at checkpoints.
They are unlocked by level after playing some mini games with Amanda about creating potions.

For now it is only a concept, if someone is interested in making that game, you are welcome even that it would be more for hobby than for something else, like Okui.

For design? But i can understand the the curiosity that can generate the pleasure to combine an animal with another. Specially with Cows, Dragons or Canines.

So… any recommendation to make this game more original?

Well, even i do the bosses for the game.

Gas Bomber:
A French skunk inventor of bombs who wants everyone to take it seriously since in his childhood he was teased for being a skunk, nicknamed him a gas pump.

Queen Turkey:
A fox dressed as a peacock who wants to fatten all clients of ChikenLover, her family’s company, with a formula she created to destroy the company’s reputation.
She had a lonely childhood where she only studied at home and with her parents who never paid attention, the only thing that kept her rope was her pet that was a turkey that had it hidden from others; when he discovered that his parents turned his pet into a Christmas turkey, driving her crazy.

Nosferatu, the sugar vampire:
Polar Corp scientific bat who was experimenting with himself to find a cure for his cancer without anyone noticing, could find the definitive cure however he obtained it for a high price. Now he needed to consume the glucose of his victims in order to maintain his heatly state for 24 hours.

M45TER, the goddess of the holidays: An alcoholic horse goddess of the parties of a forgotten culture. She is someone relaxed who does not take things seriously except on a single issue, win in her dance duels, so she regularly cheated by getting her opponents drunk however she was discovered by a high ranking god, being locked up in a vase for several years. She was released by Kabal the hunter by accident after hearing the existence of Milkshaker, now M45TER is too grateful to release her, she will do anything to pay off her debt. Kabal simply asked her to go to Kentucky to have a big party that caused chaos.

Kabal, the hunter: A cat that, while hunting animals in Africa, found a temple that did not receive it in a good way, could only get out alive if it hunted a mythological creature since it was too precious food in the temple. Upon fulfilling the deal, Kabal was rewarded with the teaching of a peculiar technique where by concentrating a lot while drinking milk from other species he could mutate his body to use the skills that these animals have. With this ability, Kabal was more interested in hunting any type of animal to keep him in captivity to get his milk to always have fun in the hunts in addition to fulfilling his services as a mercenary. He arrives in the city of Kentucky after being contacted by Polar Corp with the intention of eliminating anyone who tries to discover his plans, but the only thing that interests Kabal is Milkshaker since he never thought that a dragon would generate milk. 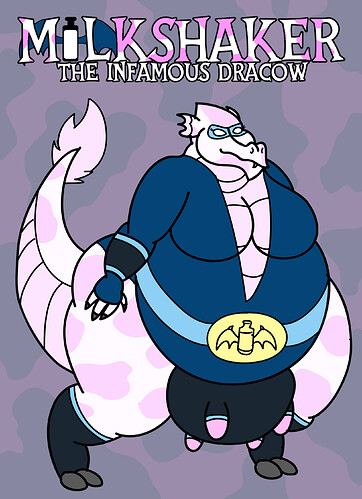 Here is a concept design about how can be Carol Cooper AKA Milkshaker, yeah… i am really bad with illustration.

hmmm while a good idea. I do have to ask for a few things. would there be a morality thing? I mean there is the whole former thief angle you had. so would that mean the player would also have to make choices? and what would count? like would stealing a criminals key part for a weapon count or would it just be stealing for some one innocent. and this is a weight gain forum what kind of weight gain would there be? since you said the player had 20 milk tanks at start that would mean they could get more would that be the weight gain aka more size to store it?

About morality… maybe i can use it to get a good end and a bad end related with the curse because you didn’t made good things like save citzens and steal some things of the inocents because they have something useful. Thanks for the question to make more interesting the game.

And yes, you can have more size to store milk but to add the morality and the curse thing, well… you only get that when you act like a criminal.

hmm sounds a bit like punishing the good guy players. it could be a way but limiting how to gain more milk room to only bad players seems like forcing them to play bad to me.
I could honestly see the good ending that has Milk-shaker be a loved hero just letting Carol be able to turn the whole power off and on.

Right, i need to see how fair can be taking the good side and bad side without punish someone because they take their favorite option.

With that case…
Yeah, with bad side she can have more gallons of milk in her udders but she became heavier and slower.
Meanwhile, with the good side, she is faster and have the “Dracowolf” potion to have more gallons and force without being slower at least temporally.

thats one idea.
if I may though take this with a grain of salt. before I saw this comment I had a idea.
Good and evil "perk"points
do good dead and get good ep and then a good point witch can be used for both dragon and milk perks but “blesses” the curse skill thus letting player get milk powers with out being evil. but good ep is less then evil ep. since many game that does thing often have evil be the more rewarding short term but harsher long term. high good player could have more respect and appreciation later in the game so better long term. while evil points only work on curse skills. and often lead to harsh treatment long term.
if carol losses her power after so long not only may she like being a respected hero what if some of the villeins learn her identity or had like a rivaler with her and go crazy if MilkShaker is gone?

edit for one thing to add to your idea. maybe good player make the milk faster? so thus while less storage they can use the skills for often while a bad player has more storage but limited production meaning they would have to save it more often. but milk also can be made out of battle so they start te battle stronger being at full tank but can’t use the milk as much due to slow production. while a good player has the same tank but refiles it much faster.

Yep, the idea of “If you’re evil, things can be easy but after some time, became in a nightmare meanwhile happens the opposite case with the good side” is something i want to explore in the game.

Well, the curse of Carol is just her half-cow conditions, her milk control powers are caused because of the experiments of her sister. So, she still have powers, maybe i would make a joke about the curse never will leave her, she must nice with everbody and retreating from being heroic because it no longer looks like a cow can be considered a bad thing.

oh then maybe while the cow aspects can leave good end Milkshaker is know fully dragon but with large (and maybe more then one set) of breasts keeping the milk powers but losing the cow curse.
and some evil or good moment could be
choice to take some of the loot in a criminals hideoout with there being so much a small amount won’t be noticed.
do a dick move to a asshole hero. (though I would add even if the player opts not to and be good karam still kicks in just with the player being innocent of anything.)

Yeah, thanks for the ideas.

I hope an artist and a programmer are interested in the idea to carry out more, in the meantime, I will develop more ideas and the story for the game, 8-9 word pages is what I have taken so far.

maybe one aspect of the good and bad end could be the final fight for the bad end is much harder then the good one.
and its more like undertail. sans the bad end boss is much harder then the good end boss where the game does not let you loss.
the final boss could be fought with allies (good end) or alone (evil end) and of couse fighting with a bunch of allies would be much easier then alone 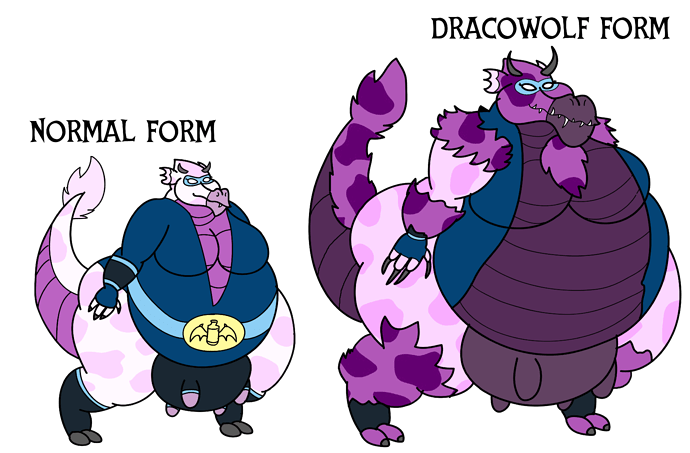 A little redesign of the main protagonist, meanwhile here is the dracowolf form.

hmmm while this is just something to say. but since you call the dracowolf from by that naming wouldn’t it loos the udders but have multiple breasts since canines have more then one pair?
could be ault skin at the least. like a new game plus curseless from.

The dracowolf transformation is a form of compensation to give the player who wants to be a good hero a chance to get more milk to use.

And, i don’t want to lose the udders because that is the most prominent part of a cow in that Dragon + Cow + Wolf hybrid.

Maybe i should put her another pair of breast because canines have 8 nipples (if there is more, you can correct me).

The idea of a Drawolf like an alternate suit don’t sounds bad anyway.

yeah the alternate suit is more based one the good end curseless thing you talked about. how Milkshaker would look if she wasn’t cursed. mostly for a new game plus kind of thing

nah, just keep it a single pair, plus the game should not punish the good heroes with a lack of milk capacity