Poll: What's our feelings on Furries?

excluding the very… aggressively weird minority, more depraved than even I am… I like it as long as they’re cute

I think the options might muddle your results a little.

Because I’m voting “Not furry, not into them” because they don’t SPECIFICALLY have an appeal for me, but I’m also not put off by them.

Considering I’ve had an account on FA since it started, I guess I have to put “am furry”, but I do feel the phrasing here needlessly divides this poll and makes it harder to read. As this is a special interest forum we could simplify the question by looking at it from a context of what we would accept in a game, namely “no furries, some furries OK, all furries OK, or no humans allowed”.

I’ve always wondered what specifically makes a person a furry. Is it the… Interest alone or both an interest and lifestyle elements? An exclusive interest?

I agree with @chilmistressfreia that your results might be a bit muddled, but not only by a threshold of interest. Being that there seem to be lots of different opinions on what makes a person a furry, you’ve got a lot of people here that say they like furry but aren’t identifying as furry.

Ideally, we would be able to make a poll with two questions:

You could actually make a nice chart out of that, with each user neatly placed on an x- and y-axis. Granted, I’m almost certain that’s not supported by the forum, but it’d be pretty slick.

To be honest even though I don’t care for furries I have a FA account. What I do is take wg stories from there and convert them to human only to satisfy my own tastes. Furries are no substitution for what you are and I prefer my own species in the games or story-lines.

I’ve seen your feedback on it and yes. I was unsure how to word it either. Perhaps a 1-10 scale would work better…? Ah well. Glad to see that around 21% of us are furs, at least!
Also, when I say “Furry” I mean you have a fursona and are attracted to furries.

In my opinion, a “Furry” is anyone who likes (whether just intrigued positively or romantically attracted to) anthropomorphic animals/art/animation/etc.

It may be kinda open in that interpretation, but I’ve been going on that judgement for a few years since I met the friend who got me to be a furry as well.

I am actually a bit surprised that there are so few furries on this server. Not that I’m disappointed, of course, I’m just intrigued.

I’ve always wondered what specifically makes a person a furry. Is it the… Interest alone or both an interest and lifestyle elements? An exclusive interest?

It’s really simple; a furry is someone who identifies themselves as being a furry - for whatever reason. It doesn’t rely on any specific thing or level of involvement or attraction. You can’t tell/label someone they are a furry, even if they are really into things that would be considered furry. The label doesn’t imply romantic attraction to furries, or a lack of attraction to humans.

Personally im not into furries but im pretty ok with them,also im not very far from furries as im into monster girls (you know,kitsunes,lamias,driders etc.)

Reopening the poll in case more people wanted to vote.

It’s a definitional thing. Whether or not you identify as a ‘furry’ depends on how that label is presented and in this case, without a consensus-based determination of what that label means, people can simply say that they aren’t, while behaving in ways that might be frequently described as ‘furry’. There’s a stigma around enjoying/following anthropomorphic media mainly due to its sexualisation and/or ‘otherkin’ that discourages self-identification.

I’d say I lean more towards monsterfolks than furry, just on virtue of monstergirl art typically hitting on my interests more than there actually being a deep preference,

I had a hard time voting- since I’m not sure if I consider myself a Furry, but at the same time I spend my time looking at a lot more fat furs than fat folks. Make of that what you will. I’m on the fence.

I answered “Not into them” under the assumption that furry applies to the well-accepted human-shaped animal concept, I’m assuming that monster girls don’t count? The variety that looks like girls with animal parts frankensteined onto them: 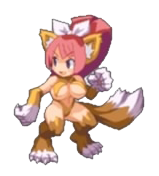 edit: oops, the topic was recommended to me so I didn’t realize it was a necro.

Most furries don’t consider that kind of character to fit under the anthro umbrella… from what little I know.

That girl, to quote TVtropes, is more on the Little Bit Beastly variety (a human who has animal features slapped on them), whereas the average fursona is a Petting Zoo Person (an animal, of any level of stylization, grafted on the human body to an appealing degree).

It’s the difference between a woman with cat ears and a woman who is a cat, and what always throws me off when Mainstream Media ™ talks about “animal people”.

You’ve pretty much got it. The character is only a furry in the loosest sense; the more accurate term would be kemonomimi.

I’m not a furry, and I don’t really think furry’s are attractive, but I can put up with them for the sake of weight gain and/or great writing.

I’m not a furry, and I’m not into them, but have nothing against them in any way. I know that furries aren’t how media perceives them, and that it’s just a hobby for them most of the time, and something they might look for in a partner.

I’m not into them, but it’s not like I wouldn’t be okay with being with one, either.

I’m a furry who literally cannot relate to humans. Heck, wvery time I see a high fantasy universe with potential for different races, but Human-Looking=Good/Not-Human=Bad, that ALWAYS grinds my gears, especially in plots that want to treat everything non-human as a villain or target practice.