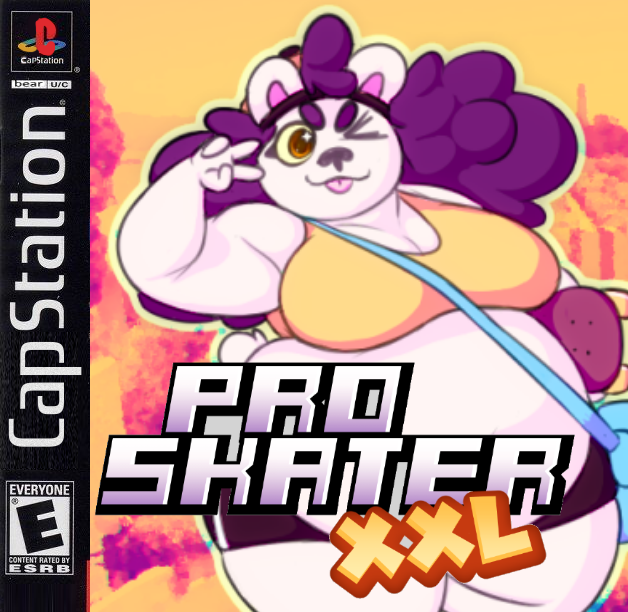 This is a skateboarding game where the goal is to win a skate competition! The competition is sponsored by a popular burger chain, and is offering a boost to your score in exchange for promoting (eating) their products during the competition!

Will you give into temptation for that sweet sickly brand deal? What sort of consequences could your decisions have? Will your skateboard even support your weight by the end of the competition? It’s up to you! 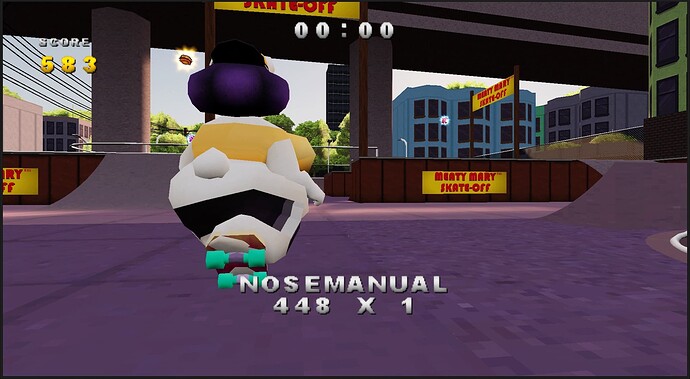 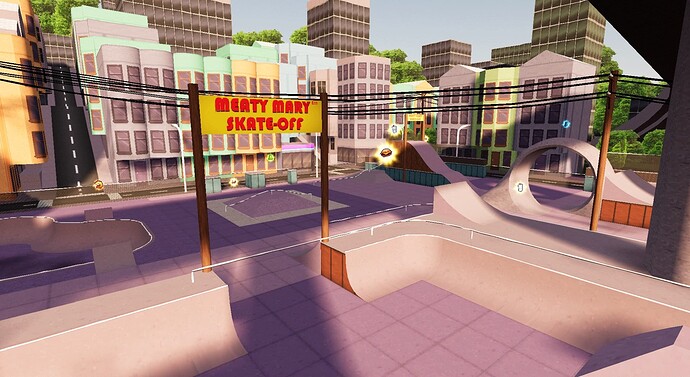 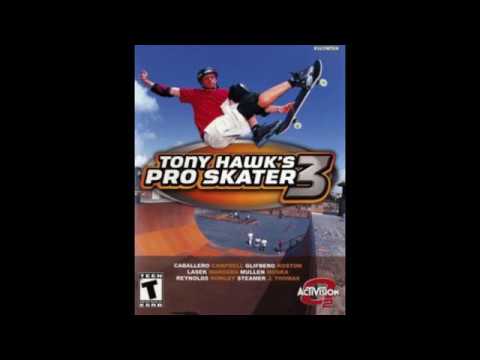 it’s pretty good for what it is. the only real problem I see is that when I try to jump over the ramp down to get the A the game seem to want to bend me up the ramp instead of just going over it. and sometimes it does who knows what and I get launched towards the middle of the pit. will be nice to see where this goes

I also noticed that you can control the camera while in skate mode with the mouse but not on controller and that if you do a manual on the back wheels you can accelerate with the jump button.

the loading screen is probably the best one I have seen, it’s in the top 5 at the very least

Minor bug report: if you completely miss a landing and hit the ground body-first, there doesn’t seem to be anything in the game’s code that says “you’re on the ground”, you just sit there endlessly falling in place, able to rotate and do tricks all you want until you button mash to get out of it (I think it’s the “get off the skateboard” button that frees you.)

Maybe a complaint: when she’s fat enough, it’s difficult to tell what direction the board is facing when you’re doing a trick sometimes.

yes it is the get off skateboard button to fix it

oh yeah this is happening in place of bailing, which has not been implemented yet

Haven’t played it yet, but I will say, congrats on making a complete curveball of my expectations (Pardon the pun)

I’ll admit it took me a while to figure out the controls, but then again this is my first time playing a skateboarding game with a keyboard…

Though I did figure it out enough to grab all of the collectables available at the current time. Can’t wait to see how this plays out.

The controls are a little unintuitive, but I’m unfamiliar with skating games. My biggest struggle at first was that I was not used to my mouse not affecting the direction, just the camera. The design and animation are good. It feels like one of those ps1 games of old but with better jiggle physics. A bit more subtle jiggle that becomes more obvious as the character gains more weight might be a good approach, though that’s better as a finishing touch rather than a primary focus. Overall the game looks promising and I’m looking forward to seeing what Captain Elderly does with it.

Not a big furry myself but I really dig this project so far! Very cute, I have a lot of nostalgia for old skating games, the aesthetic is on point, feels a bit like crash mixed with THPS.

I tried playing with a keyboard just to feel it out, it’s rough, but if the game doesn’t get a ton more complicated I think it could work? I would focus on keeping all hands on the keyboard I think, with no mouse options for menus it’s not intuitive to switch to it to move the camera. I think arrow keys for camera movement could be a good substitute.

Looking forward to seeing more from this!

thanks both of you! Some notes about the game’s input:
-i still have a lot to do regarding improving the controls so none of it is complete yet

-anything highlightable on the menu will actually be clickable once i fix an input bug, including the button icons on the bottom

-the mouse controls for the camera are something i’m still figuring out, it’s meant to be as a sort of “bend” to the camera so you can quickly peek in directions, but i need to limit it and have it reset more quickly 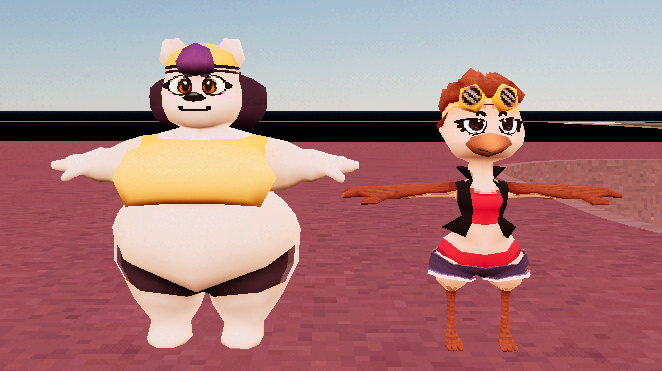 @
overhauled mac's model so that she's proportional to erica 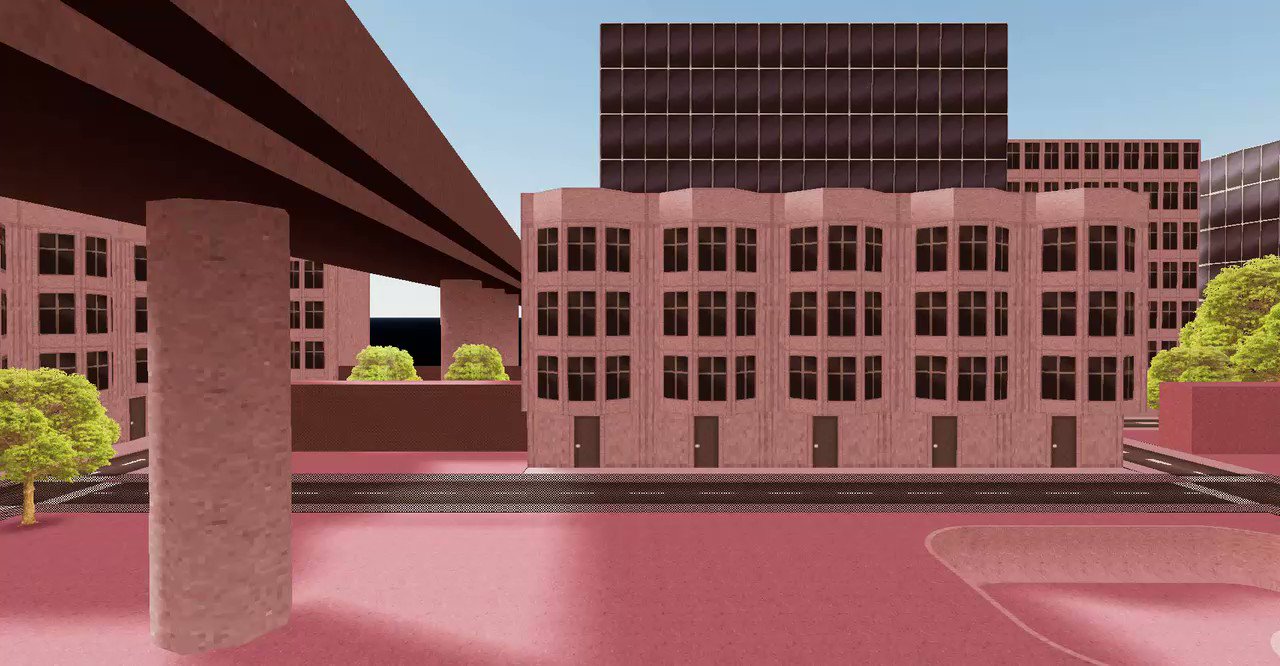 Can’t wait to shred that gnar!

Definitely needs work, but a good solid foundation, albeit I hope there are bonus points for that loading screen cause that shit was good

Seeing as nobody else posted here, just noting for those who don’t check the discord that this game was updated before the end of the jam. It’s good skating fun! The grinding has a few issues, but quite impressive how much progress was made in such a short time.

So what were the changes then from the different versions? Did it address any of the mentioned issues?

(Note: I am not a dev or involved at all, just wanted to give it a shout)

You can wipeout or whatever the skating term is for falling off the board, there’s a short little arcade mode in addition to the free skate, the level is larger with more surface options to play around with, and there’s a second skater. Physics is better, though the controls are still somewhat awkward to use on keyboard.

yea, the dev did say on the game’s Itch page that they didn’t get time to fine tune the physics before the end of the Jam. I will say I do like the whole update itself after I got used to the controls, that and the Rival character being a Tony Hawk Underground reference is a bonus.

yeah the version that was up for most of the jam was like 20% of what i have now. I ended up completely rewriting the skate physics too